One journey can change a life. One life can change the world! WOW Lecture with Dr Kiran Bedi

Stubborn and outspoken, sensitive but tough. A woman with vision who didn’t give up even in the face of adversity.She is a shining example on how a passionate person can reshape her work environment and change the course of history.

Dr. Bedi created the “3 C-Model” system: Collective, Corrective, Community Based, where prisoners could anonymously write what was happening to them within the prison environment. She promised she would read each comment.Through the feedback she realized that Gangs were ruling the prison: she separated their members and sent them to other prisons.

A strong believer that Prisoners should be treated as humans; she introduced education and trained the prisoners as teachers and seamstresses.She also introdused the inmates to meditation as her motto was “there’s more to life than jail”; She set up one day of the week for each religion, as in her prison there were people from various parts of the world,so they could all worship and respect each other.

In reply to a question about how she implemented the changes within the prison system, she replied “It’s all about patience. That’s what leadership is all about”.True to her character, when she was exiled from Delhi, instead of sitting and crying, she showed her resilience by writing a book about her experience and the changes which could be implemented in Indian prisons and in Indian society.

I respect Dr Bedi for not giving up on her dreams. Impressively she believes that she will actualise further changes within the Indian prison system while, at the same time opening the doors to other women within a heavily male dominated society.Currently Dr Bedi is one of the prominent members of the India Against Corruption,she fight for India to be corruption free country.

I feel very inspired by her fight for human rights as well as women’s rights.Her determination and hard work is very impressive.I am not surprise she has been voted as India’s most admired and trusted woman. 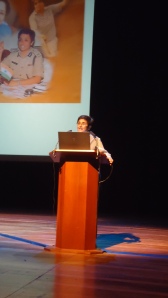 The trailer of “Yes Madam, Sir” a movie on the life story of Dr. Kiran Bedi  http://www.youtube.com/watch?v=OdteZIdoF4A