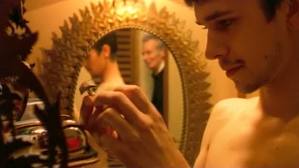 77 Beds is a short film by Alnoor Dewshi (Building,Spiritual Rampage,Jomeo& Ruliet). It is a story of a young man, Ishmael (Ben Whishow: Perfume: The Story of a Murderer, The Tempest), whose one sleepless night caused him to count back through all the beds he ever slept in. Conversation about beds, made up stories about previous beds owners seemed to be personal. Some of his tales of sleepless nights proved to be funny but yet bizarre. For instance, Ishmael lied in bed with his deceased father…I didn’t know what to think of it, how to interpret such a strong scene. Some people would probably find it disturbing, some would find it a bit emotional and some would probably think ‘what is it all about?’ I really liked the film. It was one of those shorts that caught up my attention. Simple and  interesting story.

Spiritual Rampage is another interesting 10 minutes short  from Alnoor Dewshi. Two guys decided to look for girls in the park. One is a Hari Krishna, the other is just a normal, casually dressed, guy. At first you would think that an ordinary man may have more luck with the girls however, surprisingly, the Krishna one did arise the ladies interest instead. A deep conversation about existence proved to be more enjoyable to discuss than the weird talks of the “normal guy” about the “…sister’s friend baby”. Blissful dancing and singing along with Krishna seemed to be an emotional and spiritual experience for the girls. I have to admit it’s one of my favourite short films.