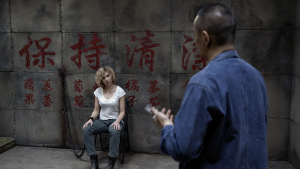 The last time I saw Scarlett Johansson in a decent film was in 2013 in Under the Skin, where she portrayed a nameless alien that adopted the physical form of a young woman and drove around Scotland picking up unwitting men to process as food. It was a frightening and unearthly film. Then she starred in the tender and wry film titled Her, where she voiced the computer software calling itself “Samantha”. Both roles were undeniably great and set me up for Scarlett’s latest film, the bubblegum action film called Lucy – Luc Besson’s new production.

The storyline indulges the audience, as it is based on the myth that people utilize only 10% of their mental capacity. Lucy, however, revolves around what would happen if we were able to increase this potential, the plot woven into what is otherwise a conventional action film. Our introduction to the protagonist is as a defenseless victim in the paws of a predator – in this case the gang run by the Korean Mr Jang (Choi Min-Sik Old Boy, The Admiral). Her status quickly changes after a bag sewn into her stomach by Mr Jang bursts into small pieces and floods her system with the new super drug it was holding. The drug grants her super human abilities like impeccable reflexes, senses and supernatural powers, and the film then deals with the evolution of these powers and Lucy’s utilization and understanding of them. Lucy’s character is anchored by Johansson’s performance, which I must admit is good but nothing extraordinary. Besson definitely gives her and his film almost a cosmic look, a look from a different dimension.

About 30 minutes into the movie comes the realization that its premise feels all too familiar, and you would not be wrong in thinking: “Wait a minute, I’ve seen a film similar to Lucy before”. The first film that came to my mind was Limitless with Bradley Cooper and Robert De Niro, the former playing a down-and-out writer who stumbles upon a mind-altering drug that transforms his fortunes overnight. But will he use his powers for good – or fun? Asking Lucy the same question introduces us to chemistry professor Norman, played by Morgan Freeman, who has an answer to the question of how she’s going to deal with her newfound powers, and is the only person able to lead the confused and gifted Lucy.

Besson creates an impressive backdrop for the plot, going for action that blows your mind and maintaining consistency in the look of the film. Unfortunately, the second part of the film loses its charm with the misplaced and humorous addition of a French cop played by Amr Waked, made more incongruous when considering the grimy visuals, gratuitous heavy-traffic car chases and over edited fight scenes that fill the movie. It’s safe to say there are more armies of black- suited Asian villains than all five movies by John Woo.

Despite the film being titled Lucy, I think Besson got slightly lost with the title character. Yes, she is powerful and strong, but it got to the point where you feel that she is just too perfect and polished and too much of a threat. I found this part of the story quite dull. In contrast, Choi Min-Sik’s character and performance as a villain was sound, looking and acting as if he were right out of a Park Chan-Wook film – a murderer, gangster, and mentally twisted individual.

Johansson’s charisma lends Lucy the power of dynamite and gives us a film that definitely isn’t boring. It could, however, have been so much better if Besson didn’t try to create a stereotypically strong, indestructible female character of the macho-Statham type where all they do is beating and shooting. Barring that, Lucy is a good film, but not one of the best. Besson needs to work harder on his next project before he achieves that.