Hunger, thirst, anxiety, a struggle to save a man’s life and the craft of drinking urine are the highlights of Kim Seong-hun’s new film Tunnel. Previously known for his action-packed film Hard Day, the film director has decided to put his next protagonist in a collapsed tunnel, just to make his life more depressing.

It all starts quietly; Jung-soo (Ha Jung-woo) – an ordinary car dealer – is driving back home to celebrate his daughter’s 4th birthday. He reassures his wife Se-hyun (Doo-na Bae) that he’ll be on time, and that she should not worry as he is bringing the best fruity birthday cake ever. To get to his house, Jung-soo has to drive through a tunnel; when he does, the tunnel collapses and the man becomes trapped under its rubble – and this is when the film becomes a ludicrous picture. Straight after the accident, he miraculously finds his phone and calls 911 – Koreans must have a helluva phone network as it works even 180 m below the surface – hear me laughing here! Jung-soo contacts slightly incompetent emergency service and informs them about the accident. With only two small bottles of water and the daughter’s cake, he has to deal with the situation until he’s rescued. In the meantime, the crisis team – run by the dedicated first response rescuer Dae-kyung (Oh Dal-su) – arrives, quickly organizes camp on site and prepares to save Jung-soo. 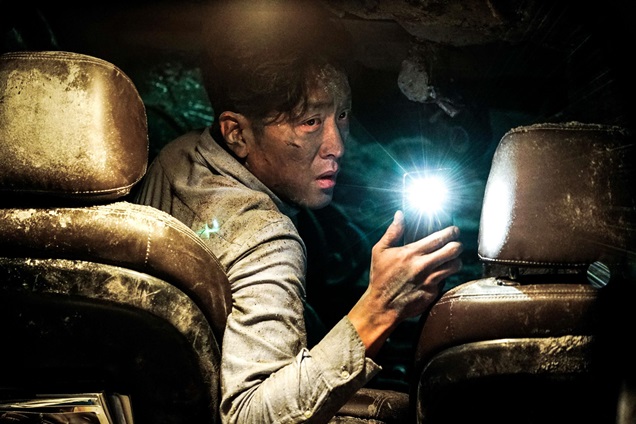 The rescue team discovers that the tunnel – built under the mountains – has been poorly constructed, and that every minute is a precious one, since no one knows how deep or how far Jung-soo is buried. Please brace yourself, as the film will make you feel slightly claustrophobic for over an hour or so – most of the Tunnel was shot inside of Jung-soo’s car or somewhere under the ground, between the giant stones.

A few days after the tunnel collapsed, the car dealer discovers that there is another person trapped on the other side of it, so he leaves his vehicle and tries to get to the female and her annoying Pug. Even in crisis, Jung-soo finds some humanity in himself and shares his water as well as his phone – he doesn’t have much battery left. The film slowly accelerates its pace, but not enough to make one feel terrified or excited about what is happening on the screen. Kim Seong-hun concentrated more on Jung-soo’s character development than action itself; there is nothing wrong with that, but it did not work for me. I got bored at some point as I felt that there was too much Jung-soo and not enough story regarding his wife (Doo-na Bae is underacted) and their relationship. The film also lacks in scenes depicting fight for survival, and when there is one, it seems like it happens way too late. Tunnel is comprised of some superb special effects, but the action is still inadequate for my liking.

17 days pass by and Jung-so, without water (he now drinks his own urine to survive) and food, becomes weaker and emotionally drained, especially when he finds out that the rescue team was digging in the wrong place – ridiculous mistakes delay the whole operation. Seo-hyun stays on site and decides to look after the entire team – Doo-na Bae’s portrayal of the woman is as dull as ditchwater; it is not the same Doo-na I knew from Sense 8, Cloud Atlas or A Girl at My Door. The character itself might have been interesting if there was more to it; apart from seeing her as the lady who cooks for the rescuers, she is also presented as a woman who faces a tough decision regarding her husband’s survival – that is about it! With all that, more absurdity awaits the audience: the guy is trapped for over 30 days, and what amazes me is that he is still alive! He didn’t even loose weight. Even in the face of his own demise, Jung-so finds the strength to be funny – what is going on? 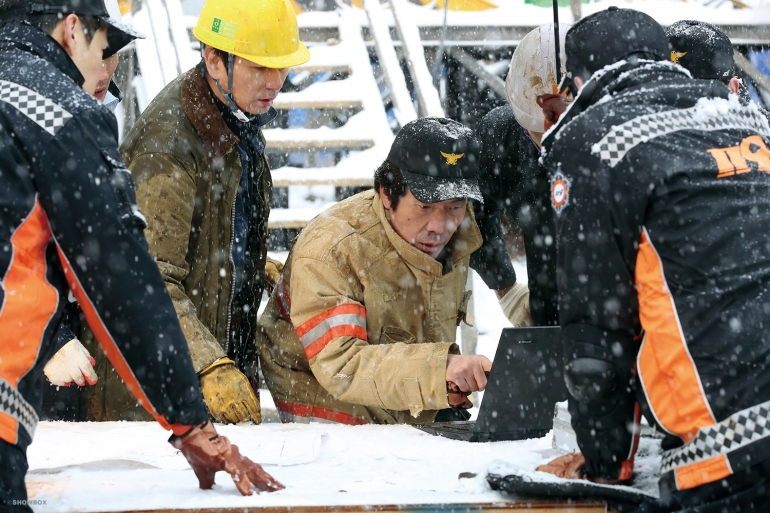 Ho Jung-woo’s characterization of the protagonist is great, I cannot deny it; it is a charismatic and full-of-passion performance. Dae-kyung is a fairly engaging individual as well, and Oh Dal-su’s portrayal of the rescue worker is splendid; he was my favourite guy in the film. Kim Seong-hun, in some ways, spoke against his own government by showing its incompetence to resolve the issues of the fictional accident. There was also a notion that prestige was more important than one’s life.

While Hard Day was a superb thriller, Tunnel is solemnly overpraised! It is a mediocre catastrophic drama with several continuity mistakes, common narrative and ridiculous humour. The film is rescued by CGI and Ha Jung-wo’s and Oh Dal-su’s acting. Music and cinematography have added to the film as well. All in all, Tunnel could actually be perfect for a general release; such productions – that do not come from Hollywood – work good in cinemas.

All photos © Another Sunday, BA Entertainment and History E&M