Recently, a few film critics stated that Wonder Woman might have started the trend where a woman becomes the heroine of a film. Say what? I completely disagree;  obviously, those critics forgot about the famous kick-ass woman Nikita. La Femme Nikita (1990) is one of the most memorable Luc Besson’s works to date; it is a stylish, smart and hair-raising thriller that has revolutionised and opened the doors of action cinema with a woman as a protagonist; so it wasn’t Wonder Woman who started it all. While both aforementioned films are great, the newest Hollywood production, Atomic Blonde, about a dangerous female spy, goes into a ludicrous overdrive of nonsense when it comes to the narrative. 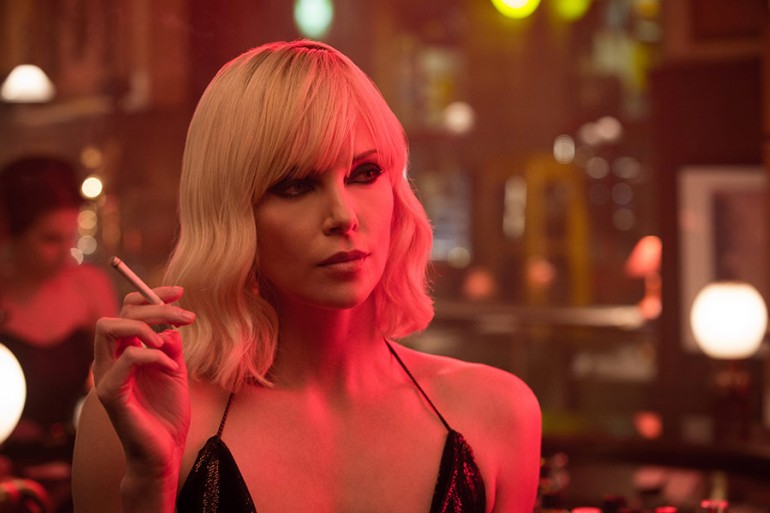 Atomic Blonde, directed by David Leitch (one of the directors responsible for John Wick), appeared to me as a colourful, Christmas-wrapped present; but what it contained… was nothing.

David Leitch takes the audience on a journey through time and stops in Berlin, in 1989, a few days before East Germany opened the Berlin Wall allowing travel from East to West. Those who know the story of ’89 Germany will know that the division was clear; the West Berlin was a lively city, filled with neon lights, clubs and rich people, while the East Berlin was dark, filled with punks, angry young people and intimidating soldiers, as well as filled with shapeless concrete buildings, designed by Soviets. At that time, there were various intelligence networks in Berlin that fought each other, where a friend may have been an enemy and an enemy a friend. In this time and world, Lorraine Broughton, a.k.a. Atomic Blonde (Charlize Theron), is an undercover MI6 spy who is sent to East Germany to recover a list which contains the names of secret agents. Lorraine is deadly, strong (this is way overdone, I am sure none of the MI6 spies are as good as Bruce Lee) and alluring throughout the film. Along the way, she kicks over a dozen men’s backsides and has a lesbian encounter with a journalist Delphine Lasalle (Sofia Boutella) – it may seem interesting, but the narrative is empty and dull, and were it not for Charlize’s charm and fighting skills, the film would have turned into a sluggish and pointless spy production.

Boredom – this word perfectly describes the story of Atomic Blonde; nevertheless, the creators managed to shoot spectacular fight scenes. Also, watching Theron act like a kung-fu fighter was the only thing that kept me in my seat until the end. James McAvoy’s portrayal of David Percival, another spy who looks like a young Nazi, felt like he was taken from another dimension. Some of his solo performances were seriously detached from the narrative – his was a very uninteresting character.

The cinematography and camera work were truly great, and music and set design were also impressive, but Atomic Blonde remains an average action film in a great need of a better script. I think Hollywood needs to learn that in order to make a good film, say on the level of Wonder Woman or La Femme Nikita, it is not enough to cast a talented actress, tell her to annihilate all the men that she encounters along the way, and then count on the film to be a huge hit. I wish Atomic Blonde had a better script, so it could showcase Theron’s acting talent, rather than her long legs and stockings.