When a film production gets put on hold or it takes a while from the production wrap-up to its premiere, it sadly immediately gives off a red light to the audience, sending out a message that the film might not turn out to be to some of the viewers’ satisfaction. Kim Joon-sung’s directorial debut Lucid Dream (the title refers to the the ability to consciously observe and/or control your dreams; does it remind you of something? Say, Christopher Nolan’s Inception?) might have been delayed due to a few intricate CGI issues – unfortunately, ultimately badly executed – which had to be incorporated into the film during the post-production. If that wasn’t enough, Lucid Dream turned out to be one of those features where there is a notable lack of creativity in the final product.

A single father and an investigative journalist Choi Dae-ho (Go Soo: The Royal Tailor, Way Back Home) faces hardship when his son Min-woo (Kim Kang-hoon) is kidnapped in a theme park. Three years pass, and the investigation run by detective Song Bang-sub (Sul Kyoung-gu: The Merciless, Memoir of a Murderer, Wish) has still not moved forward. While police tries to find Min-woo, Dae-ho desperately searches for those who might have something to do with his son’s disappearance. With no results, the journalist comes up with an unconventional solution; he meets with So Hyun (Kang Hye-jeong: Oldboy), a doctor who conducts tentative psychotherapy with the use of lucid dreams. So Hyun sends Dae-ho into his dream, to the day his son was taken, and when Dae-ho can’t get what he wants, he entices others into conscious dreams. How far will he go before he finds his son? 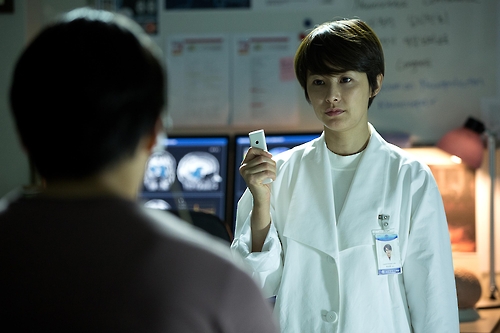 So what are the issues with Lucid Dream? The film is filled with multitudinous problems which turned the film into an unprepossessing work. First of all, Christopher Nolan’s Inception was not only the main field of inspiration, but for the first-time director and writer Kim Joon-sung, Lucid Dream took a turn to imitation; it appears to be a bad and chaotic version of Nolan’s work. It is visible that Kim had no idea how to properly draw inspiration from the phenomenal Inception – his derivatives result in a total fiasco. Obviously, a lack of originality is the second main point; the camera work and the visual effects hit the rock bottom. You might ask, what about the action? Well, Lucid Dream is 100+ minutes long, but it feels like it is the longest film in the world; the pace is slacking and the action feels petrified – it seems like no one really bothered to work on it. The actors are dull as well. Go Soo’s performance is without a profound significance and Sul Kyoung-gu’s portrayal of the detective is shockingly dim throughout the film. Both actors gave mediocre performances; it is unfortunate, as Go’ and Sul’s recent film works haven’t seen much success. Even Kang Hye-jeong’s – she is well-known for her role in Park Chan-wook’s Oldboy – characterization of the psychiatrist is weak and unconvincing.

Lucid Dream is unbearably predictable and utterly meaningless. Kim Joong-sung must have forgotten that films are made for the audience, not for filmmakers. The viewers were left out as recipients; it makes one experience nothing but boredom. It is one of the weakest science fiction productions that I have seen in a decade. Netflix should have thought twice before purchasing such a nonsensical film. Don’t waste your time on Lucid Dream; go out and have a pint of beer instead.

All photos © Next Entertainment World & Netflix