It is undeniable that Korean pop is now one of the most valuable export products of South Korea and after Samsung and Hyundai, the third most recognised K-‘brand’ in the world. It brings the economy several billion dollars a year and there is no sign of the business slowing down.

K-pop boy- and girl-groups use pop schemes from the West while adding their own style and spin to it all, and even though the struggle to find a concept that would make each group stand out is very real, the number of new K-pop groups grows at an immense rate with each passing year. It is not just the well-established idols – the likes of the now global giant BTS – travelling the world.

The lesser-known singers, often called rookie idols, also occasionally make their way to various cities around the globe, including those in the USA, South America, Europe and even Middle East; it should come as no surprise that the ever-swinging city of London makes for a popular stop on the global K-pop routes. Seven O’Clock, formed less than two years ago, is one such K-pop boy group who recently popped into the capital of the UK on their The Beginning World Tour, bringing the group’s fans to their feet with their music and fancy choreography. 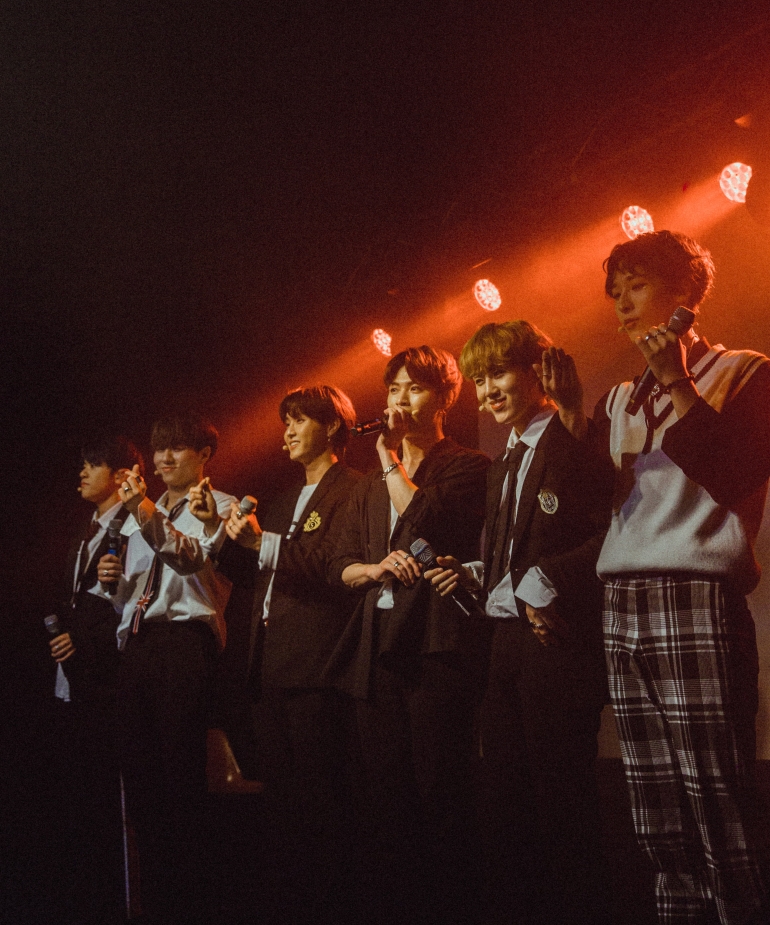 On April 6th, Seven O’Clock greeted their fans at The Garage, an iconic live music venue and a club that has been running since 1993. In the gently dimming lights, to a wildly excited crowd, the boy group came out on the stage to perform; it got so loud so fast that one could barely hear their music, let alone the lyrics. Consisting of six members, Han-gyeom, Hyun, 2Soul, Jeong-gyu, Tae-young and the new addition to the group, Andy, the group quickly made the audience groove to their music. Their early work, including Echo, was recorded with Vaan, a former member, so the first 15 minutes of the show were solely performed by the original five members, until the group moved on to their newly released songs and brought Andy back on the stage to perform Eyes on You. While barely breaking sweat and managing to look ravishing throughout the show, the group addressed the crowd and thanked everyone for the support. With plenty of encouragement from the audience, they moved on to Get Away and with a well-synchronised dance sequence, they impressed everyone with their dashing stage presence. As the group hasn’t recorded many songs as of yet, they cleverly kept their fans entertained by performing a selection of dance covers of the songs by EXO, Monster X and BTS. After a short break and an outfit change, Seven O’Clock returned on the stage with some individual moments for the members, and a few more covers, including a great cover of Bruno Mars’ Treasure – the members really brought an energy spike with their stage and swept the fans off their collective feet. With dance covers taking up a fair share of the time, the boys’ time for vocal performances was almost too limited. That said, when Tae-young appeared and performed solo with his gentle, but strong vocals, he melted everyone’s hearts. After his solo number, the rest of the group joined Tae-young for a joint performance of the Boys Over Flowers’ OST – Almost Paradise. Their closing song was Get Away and Seven O’Clock waved their goodbyes to the crowd, promising to come back to London again soon. The show was fun to watch; there is no doubt that with the right kind of guidance and strategy, the boy group has a proper chance to pave its way to a bigger K-pop stage.