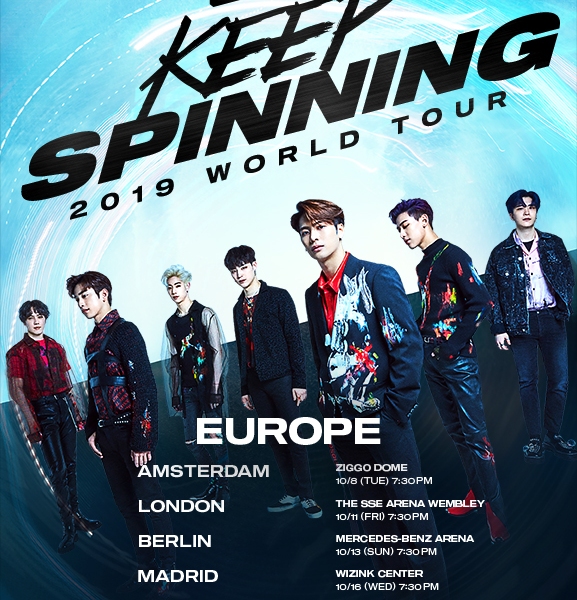 GOT7, a South Korean boy group, gained immense attention in 2014 when they debuted with their first EP Got It, which went on to place number one on the Billboard World Album Chart. Known for their impressive staging during their concerts and for their respectable vocal performances, the boy group (with the help of My Music Taste) is about to embark on their second European tour: KEEP SPINNING 2019 World Tour, starting October 8th in Amsterdam and then moving on to Berlin, London, Madrid and ending in Paris.

GOT7, consisting of JB, Mark, Jackson, Jin-young, Young-jae, Bam-Bam, and Yug-yeom, has also gathered an incredible number of views on their music videos, including over 200 million views on Just Right and around 45 million views on their newest single Eclipse. They also reached number one on the US iTunes chart and placed at the top of the charts in 26 other regions. Last year, the Billboard’s List of Top 10 Tours included GOT7’s tour as one to be remembered, and this year the group was nominated by Billboard Music Awards for the Top Social Artist, a fan-voted category.

The members of GOT7, following their first sold-out European tour, worked hard on their new music and in May 2019, the group released the 9th EP Spinning Top: Between Security & Insecurity. They also began their World Tour that kicked off in June, in Seoul; so far, they already toured in North America – where GOT7 performed on Today Show, becoming the first Korean group to do so – in Mexico and Australia, with Europe next on the map.

GOT7, Kpop, music, My Music Taste