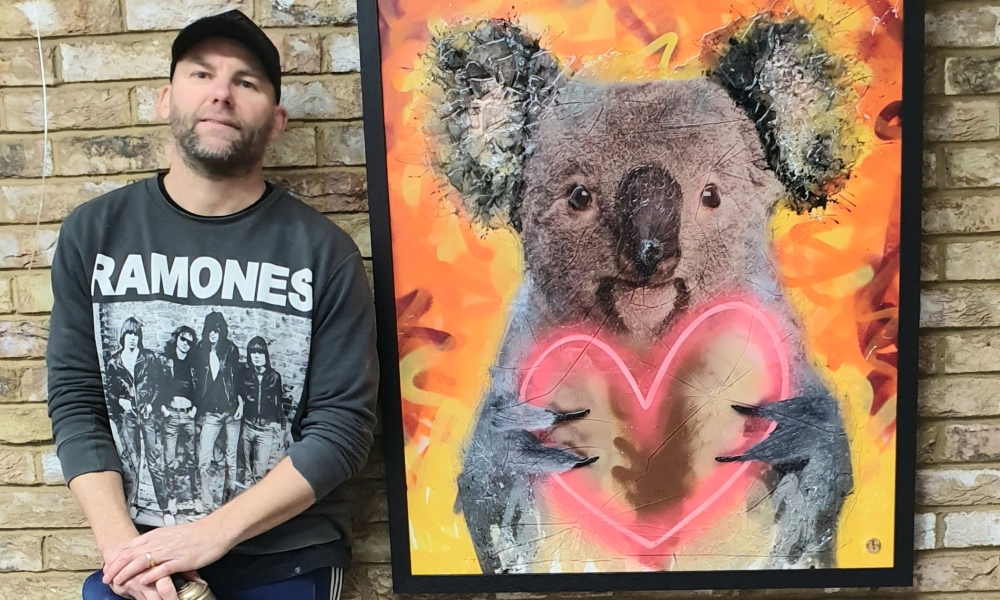 Artist Dan Pearce Offers a Chance to Win One-off Artwork for £10, With All Money Going Towards Australian Wildlife Charity

Dan Pearce, an Australia-born artist whose work sells for up to £10,000 and is collected by the likes of Anthony Joshua, Rag’n’Bone Man, 50Cent and a host of Premiership footballers, is offering the chance to win a piece of his art for a charity donation as little as £10, to help wildlife requiring urgent care following the Australian bushfires. All proceeds from the competition to win the huge piece – depicting a koala holding a neon heart – will go towards saving the iconic Australian species and other animals at the Kangaroo Island Wildlife Park, which has lost over 150,000 hectares of land to the sweeping bushfires.

London-based Dan Pearce, whose work also adorns the walls of celebrity members’ club, Tramp, was born in Australia before moving to Liverpool aged four, but still has close ties to the country.

He says: “When I finished University I returned to Oz to find my roots and explore this beautiful country. I met my wife, who was also backpacking, on Bondi Beach. Her visa soon expired but she joined me on a Partner Visa and we decided to stay, making the eastern suburbs of Sydney our home for the next seven years.

“My brothers joined us and never left, my youngest lives in Sydney and my oldest in Wollongong. I have many amazing and unforgettable memories of Oz. It is a country close to my heart and during the past few months it has been heartbreaking to see it devastated by fire, knowing it will take generations to recover.”

Dan’s unique ‘mixed media’ art combines graffiti, traditional painting, collage and textured resin, often incorporating smashed glass and other objects to create pieces that can be appreciated from afar and take on a whole new meaning when seen up close. His specially commissioned portrait of Anthony Joshua hangs above the boxing ring at the heavyweight champion’s training camp and he halted work on another personally requested artwork for rapper 50 Cent to complete this charity piece.

Dan has previously created portraits of animals for a series entitled Endangered and followed its success with a second collection, called Endangered Spaces the following year. But his close ties to Australia make this creation his most personal and important to date. He says: “Donating an artwork seems so insignificant to the size of the issue but I suppose every bit of help counts.” To make a donation and enter the competition to win this one-off, original piece, please visit Go Fund Me website. Donations of £10 or above will secure your place in the draw, which will take place on February 14.