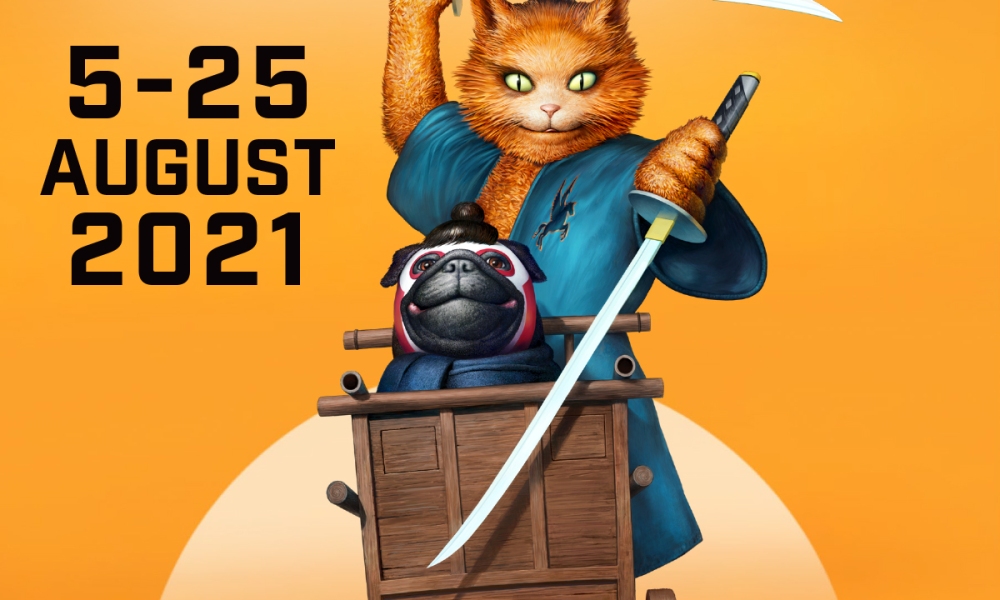 The Fantasia International Film Festival is proud to announce the first wave of programming for its upcoming 25th edition, set again to take place as a virtual event accessible to audiences across Canada. The festival will run from August 5 – 25, 2021 and will include scheduled screenings and premieres, panels, and workshops, with films once again hosted on the leading-edge platform created by Festival Scope and Shift72. As the summer approaches, Fantasia organizers will be following advice from local health authorities in Montreal with respect to the possibility of adding a limited range of physical events as well. In celebration of the key role that Japan’s culture has played across Fantasia’s history, the festival’s 25th edition will be featuring an enhanced focus on Japanese cinema.

Following the earlier news of the festival’s opening film, the world premiere of Julien Knafo’s Quebec-set zomcom Brain Freeze starring Roy Dupuis and Iani Bédard, details on the first wave of feature films have been revealed, with the full lineup to be announced in late July.

STEADY YOUR GAZE FOR THE LAST THING MARY SAW

Brace yourself for The Last Thing Mary Saw, a breathtaking period occult drama set in an isolated farmhouse in the winter of 1843, where a young woman is under investigation following the mysterious death of her family’s matriarch. It soon becomes apparent that ageless forces are at play, from within and without. An eerie and hypnotic nightmare vision from debuting writer/director Edoardo Vitaletti, starring Stefanie Scott (INSIDIOUS: CHAPTER 3), Isabelle Fuhrman (ORPHAN), Judith Roberts (YOU WERE NEVER REALLY HERE), and Rory Culkin (LORDS OF CHAOS). WORLD PREMIERE.

Welcome back to Hyakkaoh Academy, where the students engage in compulsive gambling to climb the social ladder, but this time around the return of a demented alumni will wreak a new kind of havoc on the school. Kakegurui 2: Ultimate Russian Roulette, written and directed by Tsutomu Hanabusa (PROJECT DREAMS), raises the stakes beyond money and clout to a game of life and death. This highly creative, colorful, and thrilling manga adaptation makes a reinvented poker game as engaging as a championship match. NORTH AMERICAN PREMIERE.

RICHARD BATES JR. INVITES YOU ON A GONZO SPIRITUAL QUEST

Richard Bates Jr. has been a longstanding member of the Fantasia Family with fest favourites EXCISION, TRASH FIRE, TONE-DEAF, and SUBURBAN GOTHIC. He returns with the outlandish King Knight, an outsider’s outsider comedy starring Matthew Gray Gubler and Angela Sarafyan as Thorn and Willow, husband-and-wife high priest and priestess of a coven of witches in a small California community. When Willow unearths a secret from Thorn’s past, their lives are thrown into turmoil in this kooky, clever treat, decked with a wild cast that includes Nelson Franklin, Johnny Pemberton, Barbara Crampton, Ray Wise, Andy Milonakis, and the voices of Aubrey Plaza and AnnaLynne McCord. WORLD PREMIERE.

DAIGO MATSUI REACHES INTO THE AFTERLIFE FOR REMAIN IN TWILIGHT

Six high school friends reunite for a wedding ceremony in the newest feature from Fantasia favourite Daigo Matsui. They reconnect as if no time has passed, but there’s an unspoken question lingering in the air, as one of them should not be there. Adapted from a stage play inspired by the death of a real-life friend, Remain in Twilight takes audiences on a bittersweet, grief-stricken journey at the crossroads between a buddy comedy and supernatural drama. NORTH AMERICAN PREMIERE.

The new wave of South African genre cinema continues to astonish in Indemnity, the feature directorial debut of Gambit Films’ Travis Taute, co-writer and executive producer of Nosipho Dumisa’s Fantasia-award-winner NUMBER 37 (and director of the originating short) and a writer and director on the hit Netflix series BLOOD & WATER. A subversive, high-tension action thriller that follows a fireman (Jarrid Geduld) with an anguished past who finds himself on the run for a crime he has no memory of, the knockout feature speaks to the horrors of the international arms trade and the use of trauma itself as a weapon. Co-starring Gail Mabalane (BLOOD & WATER), Andre Jacobs (BLACK VENUS), Nicole Fortuin (FLATLAND), and Tshamano Sebe (8, a Fantasia 2019 breakout premiere). WORLD PREMIERE.

MASASHI YAMAMOTO THROWS THE PARTY OF THE SUMMER IN WONDERFUL PARADISE

Punk iconoclast Masashi Yamamoto is back with Wonderful Paradise, a demented spin on the unwanted-guest scenario that builds and builds until all notions of cinematic realism are thrown out the window and social constructs – of family, class, and Japanese decorum –  are skewered by mayhem. Moving out of their house in the wealthy suburbs of Tokyo, the Sasayas find the transition made all the more complicated after their daughter posts an open party invite online for anyone to join, inviting a parade of estranged family, jilted lovers, and supernatural surprises into their lives. NORTH AMERICAN PREMIERE.

Spain. 1876. A young girl (Haizea Carneros) is severely injured when a religious orphanage is bombed during the third Carlist war. On the verge of death, she is healed by a mysterious woman (Itziar Ituño) whom she perceives to be an angel. They are soon separated, the child left to fend for herself – for decades upon decades. With All The Moons, director Igor Legarreta masterfully employs the tenets of vampire lore as the basis for an intimate epic dealing with themes of life and death, love and loneliness, devotion and intolerance. Impeccably crafted, it ranks among the best of vampire cinema. INTERNATIONAL PREMIERE.

APPEARANCES CAN BE MISLEADING IN THE ACTION-PACKED CAUTION, HAZARDOUS WIFE

Based on the beloved TV series by the same name, Toya Sato’s Caution, Hazardous Wife stars Haruka Ayase (REAL) as an amnesiac housewife living a quiet life with her perfect husband (Hidetoshi Nishijima, CREEPY). As her memories begin to return, she discovers an unexpected and dangerous side to herself she never predicted. Combining first-rate fight choreography with a winning comedic charisma from Ayase, CAUTION, HAZARDOUS WIFE is an absolute must-see for any action fan. NORTH AMERICAN PREMIERE.

A NEW CANADIAN HORROR CLASSIC IS BORN – THE RIGHTEOUS

Actor turned director Mark O’Brien (READY OR NOT, ARRIVAL) makes his feature debut with the slow-burn, character-driven occult chiller The Righteous, one of the year’s most thrilling genre discoveries that takes full advantage of Newfoundland’s maritime otherworldliness while blending timeless themes with an inventive and exciting filmmaking approach. A former priest who left the church to start a family is gripped by tragedy after his child’s death, and the life of him and his wife are thrown into further chaos upon the arrival of a mysterious young stranger. The film is written and directed by O’Brien, who also co-stars in the film alongside his READY OR NOT castmate Henry Czerny and a terrific Mimi Kuzyk (LOST AND DELIRIOUS). WORLD PREMIERE.

A death metal singer must team up with the ghost of her recently deceased father to uncover a scheme underway at the company he left behind… and miraculously save his life! A punchy, playful, and pleasingly morbid comedy romp, Not Quite Dead Yet mixes up a quick-paced concoction of corporate intrigue, family melodrama, and supernatural silliness. With deft timing, first-time director Shinji Hamasaki orchestrates an outstanding cast of sympathetic characters interpreted by stars Suzu Hirose (CHIHAYAFURU), Ryo Yoshizawa (BLEACH), and Shinichi Tsutsumi (THE MOLE SONG). NORTH AMERICAN PREMIERE.

BABY MONEY WILL MURDER YOU WITH TENSION

After a botched burglary, a pair of criminals take refuge in the house of a single mother as they wait on their getaway driver to hash an escape plan in Mikhael Bassilli and Luc Walpoth’s phenomenal Baby Money. Mounting suspense, textured characters, and jolting storytelling come together in this powerhouse, pulse-racing crime thriller. Led by a remarkable cast that includes Danay Garcia (FEAR THE WALKING DEAD), Taja V. Simpson (THE OVAL), Michael Drayer (MR. ROBOT), and Joey Kern (GOOD BEHAVIOR) alongside newcomer Vernon Taylor III, an exceptional special-needs talent. WORLD PREMIERE.

A DOSE OF ART KABUKI TO HEAL OUR SOULS

While theatres were shut down due to COVID-19, young Kabuki-actor Kazutaro Nakamura decided to unite with many unique artists to create ART KABUKI, a compelling filmed performance under the subject of ‘Play, Beauty and Life’. A visually stunning modern take on a centuries-old, traditional art form, Nakamura succeeds exceptionally at inspiring hope and joy through creativity in these difficult times. NORTH AMERICAN PREMIERE.

HELLBENDER IS AN OCCULT INSPIRATION

An occult, coming-of-age film unlike any you’ve seen, Hellbender is the extraordinary new creation from the Adams Family (John Adams, Toby Poser, Zelda Adams), the gifted filmmaking family behind 2019’s indie sensation THE DEEPER YOU DIG. It further affirms their stature as singular poets of the genre, making soulful and wholly original works with a one-of-a-kind look and feel, this time in the dreamy story of a lonely teenage girl (Zelda Adams) who finds guidance in her family’s suppressed supernatural lineage. HELLBENDER imaginatively explores questions of identity, instinct, and power roles in youth and parenthood alike. An uncanny film that’s all at once haunting, heartfelt, freakish, and fun. WORLD PREMIERE.

12 years after BURATINO, SON OF PINOCCHIO, Rasmus Merivoo has returned to filmmaking with Kratt. In a small Estonian village, two kids (Nora and Harri Merivoo, the director’s own children), hoping to get out of farm work, bring the local legend of The Kratt – a Terminator-like demonic spirit that must always be fed work, or else – to life so they can escape their chores, but in doing so they may bring about the destruction of all human life on earth! It’s pretty safe to say that no other movie at Fantasia 2021 will reach KRATT’s delightful preposterousness— unless another Estonian dry comedy/fantasy/political commentary comes along to outplace it. NORTH AMERICAN PREMIERE.

A TWISTING AND TRANSFIXING JOURNEY INTO ULTRASOUND

After his car breaks down, Glen (Vincent Kartheiser, MAD MEN) spends one hell of an odd night with a married couple, setting into motion a chain of events that alter their lives plus those of several random strangers. That’s the official synopsis of Rob Schroeder’s ingenious Ultrasound and it’s best we don’t say a word more without running the risk of ruining the film’s endlessly twisty surprises that easily make it one of the most engrossing and unexpected genre creations of the year. Co-starring Breeda Wool (MR. MERCEDES), Chelsea Lopez (ARE WE NOT CATS), Tunde Adebimpe (RACHEL GETTING MARRIED), Rainey Qualley (OCEAN’S 8), and Bob Stephenson (LADY BIRD). INTERNATIONAL PREMIERE.

The 25th edition of the Fantasia International Film Festival will be presented by Videotron in collaboration with Desjardins, and will be made possible thanks to the financial assistance of the Government of Quebec, SODEC, Telefilm Canada, the City of Montreal, the Conseil des arts of Montreal and Tourisme Montréal.

A second wave of Fantasia 2021 titles will be announced in June with the full lineup to be revealed in late July, with ticket sales commencing shortly afterwards.

For more information go to www.fantasiafestival.com