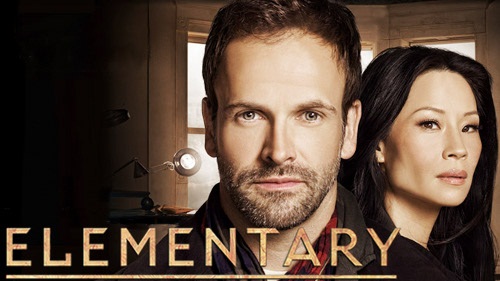 Sherlock Holmes, we all know the name, his adventures with Dr. Watson have been around for centuries. In recent years there has been an array of new adaptations of the world’s most famous detective, including Guy Ritchie’s films and the British modern retelling Sherlock. Now America has decided to  modernise, and indeed Americanise, Sir Arthur Conan Doyle’s masterpiece. Several alterations have been made to the classic tale, not least that John Watson is now a woman: Joan. As such, Elementary has caused an uproar, both good and bad.

The show takes place in New York when Holmes becomes a consultant for the NYPD after finishing a stint in rehab, and after he is sponsored by ex-surgeon Joan Watson. Similar to the books, a crime occurs each episode and it is up to the dynamic duo to try to solve the mystery. Unfortunately this is where the comparison begins to falter, other than using character names and relationships, Elementary is just like other US crime dramas: repetitive. Had the show used more aspects from the novels and short stories as a basis for the plot, (I noticed two out of sixty stories used), then maybe the show wouldn’t have felt like a CSI ripoff. This could be due to the fact that CBS writers do not know how to adequetly adapt the stories. When Mark Gatiss and Steven Moffat refused to allow America to adapt their show Sherlock I was relieved, judging by previous failures at remaking British shows, such as Skins and The Inbetweeners, this was a good choice. When CBS announced the new show, Steven Moffat said to the BBC:

“I hope they know their Sherlock Holmes very, very well indeed because we know what’s in our show and wasn’t in the original. So if we did discover our material had made it into somebody else’s show we would have a problem with that.”

Perhaps this could be linked to the shows current failure at breathing life into a modern American retelling, however I believe this is not so. The main problem I have with Elementary is that it does not seem to be related to Conan Doyle’s work. For instance, Holmes’ character is poorly written and, clearly for the benefit of the series, is made more ‘human’ than in the books. Sherlock Holmes always knows how to solve a crime, and yet in Elementary he frequently feels he doesn’t know the answer, this would not happen. Additionally Holmes frequently employs the services of prostitutes to satisfy his desires, this is one thing that Conan Doyle ensured was impossible as Holmes is a self-proclaimed asexual who is not interested in sex. That is why, in ‘A Scandal in Bohemia’, Sherlock’s admiration of Irene Adler’s ability to outsmart him is so significant to his personality. The show’s creator’s have just not been able to do an accurate representation of Holmes. Furthermore, the show’s representation of Moriarty, although interesting, also attempts to make the character more relatable. Put simply, Moriarty is supposed to be a criminal mastermind and would not make a such a big mistake as is shown in the series finale. It may seem like I’m nitpicking but I believe that these changes to the much-loved characters are important.

However, one thing that the show benefits from is the change of male characters into women. This alteration was intriguing and can allow feminists to rejoice. My only worry is that, as the show continues, the characters may divulge into stereotypes. I would really like to see strong female characters in this show, it will give it an edge. In terms of acting I do feel that there is a lack of chemistry between Jonny Lee Miller (Holmes) and Lucy Liu (Watson), as well as between other characters. Also, sometimes the acting seems to be too forced. Unfortunately for Elementary, this means that adaptations such as Sherlock and Guy Ritchie’s film series will continue to be at a higher standard. Let’s see how the next series pans out.

The second season of Elementary is currently being filmed.