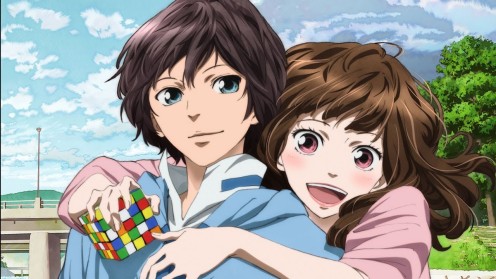 Hal, Wit Studio’s first public project, is a clever and elegant depiction of grief, the nature of relationships, and the catharsis in moving on.  Set in a technologically advanced and yet anachronistic society, the film briefly introduces the audience to robot Q01 before we learn of an unexpected death that separates the titular character, Hal, from Kurumi, the girl he loves. Q01 is asked to step in by Kurumi’s distraught grandfather, and soon “Hal” is helping the withdrawn Kurumi return to society, the journey taking them both into an exploration of Hal’s relationship with Kurumi as “Hal” struggles to understand human nature and emotions.

It is perhaps natural for a viewer’s first impression of Hal to be one where the plot appears simplistic in its straightforwardness, a notion given further weight by the film’s running time of 60 minutes. It is the characters then, that hold the audience’s interest – Hal’s adapting to his new life being the progression that carries the audience through the beginning of the film before giving way to an exploration of Kurumi and Hal’s history, which, in juxtaposition with the development of “Hal” and Kurumi’s new relationship, gives necessary depth to the plot. The end of the film, however, is what perhaps stays most with the viewer, providing a twist that forces both a change in perspective and in the questions we want to ask. The appeal of the film, then, is a combination of all these elements, rendering what could have been a generic if entertaining film into so much more.

Wit Studio’s very first project was Attack on Titan, and while Hal differs from it in almost every aspect, both projects share a fluidity in animation and a richness in background detail that demonstrate this relationship. Mangaka Io Sakisaki’s endearing character design and the vivid colours of the film are further enticement for the audience, while also serving as visual cues for the atmosphere of each scene. Hal is also notable for being Ryoutarou Makihara’s directorial debut, with several interesting choices being crucial to preserving the twist in the plot, the progression of scenes and arbitrary dialogue allowing the audience to form misleading assumptions about what exactly they were watching take place. The visibility of Kurumi is perhaps one such decision, as she is, for the most part and especially at the beginning, a periphery part of even her own scenes, the audience seeing “Hal” or her interaction with objects rather than herself. Her actual appearances on screen therefore coincide with her opening up to “Hal”, especially once the story shifts to showing her and Hal’s past relationship, thereby allowing “Hal” and the audience to learn about her at the same time. Setting it all to Michiru Oshima’s music was the last touch needed to finalise the movie, underscoring each scene beautifully to reinforce the action and thoughts on screen.

Perhaps the biggest criticism that could be made of Hal is that the film’s short running time prevents further exploration of the society it’s set in, as well as the relationships the supporting characters had with Hal and Kurumi. Whilst I would have liked to have seen more expansion on these characters, the relationship between Hal and Kurumi is the heart of the story and remains the most compelling even while we wish we knew more about characters like Ryuu. Overall, Hal is a poignant film about love and loss and perhaps even about being human. Combined with excellent direction, a vibrant palette, and lovely music, it’s safe to say that Hal is a wonderful film.