In Conversation with Robert and Jamie MacDonald- Three Kilts in Mongolia

How many Scotsmen do you need to tackle a Mongolian wrestler? This is the question I tried to ask the airline pilot Jamie MacDonald, photographer Robert MacDonald and David Scott, who travelled to Gengkis Khan’s kingdom to challenge the locals to wrestling. They undertook a 5000 mile journey to experience not only the sport itself, but also the ordinary lives of Mongolian people. The MacDonald brothers decided to film their adventures,  which was later turned into an extraordinary 45 minutes documentary entitled Three Kilts in Mongolia. I didn’t know much about the country itself until I watched the film a few months ago. Their remarkable voyage to the remote town of Bulgan – with the population of 11,198 – was probably the longest journey they have ever gone on: From the warmth of their own beds to the harshness of sleeping in Gers in the wilderness and from short journeys in their own family cars to travelling in excess of 55 hours together in an old cramped van. How did it go? You can find out about it by watching Three Kilts in Mongolia, which is currently available on vimeo.

How did it all start and how did you come up with the idea for Three Kilts in Mongolia?

Robert: I had already been to Mongolia in 2007 to compete in an Ultra Marathon called The Gobi Challenge. It was an amazing and life changing experience but I felt I hadn’t experienced enough Mongolian culture to truly appreciate this mysterious and beautiful country. So, 7 years later, I approached Sandbaggers – the company that created the Gobi Challenge – and told them I wanted to experience and record as much Mongolian culture and beauty as possible in the space of 10 days. They came up with an expedition proposal which included a trek across the Mongolian wilderness that ended in us competing in a wrestle tournament in a remote wrestle camp with the regional champions. We accepted and decided that our crew of 3 would compete wearing our national dress, the kilt.

Could you tell me more about the preparations you had to go through before travelling to Mongolia?

We had 8 weeks to improve our fitness and strength in order to lessen our chances of serious injury. We trained with a Mongolian ex-pat based in Glasgow and trained in highland wrestling and Judo, not to mention numerous visits to the gym.

What was the biggest challenge you faced when you were in Mongolia?

The discomfort of the van we travelled in. We managed to squeeze 6 well-built gentlemen, a small Mongolian guide, luggage, and all our filming equipment into a small 7 seater. On average we spent about 6 hours a day in this cramped van. The longest stint in the van was 20 hours – the night before the wrestle tournament.

Before watching the film, I didn’t know much about Mongolia itself. Your film captured the country’s beauty very well, and introduced me to a new territory which ought to be explored even more. Was it your intention to concentrate on the cinematography as well as the lives of the ordinary Mongolian people?

Yes. We knew the Mongolian wilderness was breathtaking so we wanted to do it justice and in order to do that we had to spend a lot of time and effort using the recording equipment we brought.

In the film you challenged a Mongolian wrestler. How did that go? Any injuries?

We challenged several professional Mongolian wrestlers. These fearsome guys were huge and incredibly strong so our biggest fear was being injured 20 hours away from a hospital. The morning of the tournament was pretty grim. Being the only member of the team with no experience in contact sports, I was petrified in the moments before the fighting started. To see if we sustained any injuries you’ll need to watch the film.

Would you undertake such a journey again? Perhaps to a different, more remote country?

Absolutely. Travelling and experiencing other cultures makes us better people. Recording those experiences and sharing them with the world will hopefully inspire others to do the same. We’re considering an adventure in Namibia for our next film.

Could you tell me more about the film production? How did you manage to finance the project?

It was done on a very low budget and financed through our company, Air Creations. We took one camera, two lenses, one tripod, and a drone.

What is next for you? Any new projects in the pipeline?

At the moment we’re concentrating on the progression of our business Air Creations in the UK but we have approached Sandbaggers again and they are working on a proposal for 2016. Keep your eyes on our Facebook page for more details. 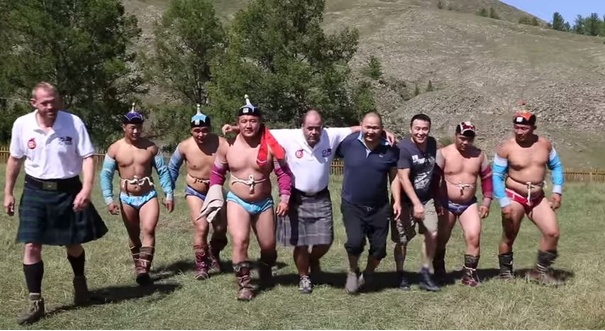 Documentary, Film, In Conversation with