Kong. King Kong. The tale of the majestic ape has been brought to the big screen a few times already. The most memorable one – in my opinion – was and still is John Gullermin’s 1976 King Kong, starring the glorious Jessica Lange and Jeff Bridges. The film was the fifth highest grossing production of 1977 and was awarded the Academy Award for Best Visual Effects. Unlike the 1976 remake of the 1933 Merian C. Cooper’ and Ernest B. Schoedsack’s King Kong, the sequel to the 1976 film, King Kong Lives (1986), was a commercial failure. And when Peter Jackson released his remake of the original of the same name, it was labelled to have a “majestic sense of spectacle”. King Kong’s story provides numerous opportunities for the filmmakers to either produce something appealing for the audience, or something horrendous like the King Kong Lives.

When in 2015, Jordan Vogt-Roberts announced that he will direct a new King Kong film, written by Dan Gilroy, Max Borenstein and Connolly, and based on the story by John Gatins, I was honestly gobsmacked and very sceptical about it, particularly after the release of its first trailer. After two years in the making, the film is now finally being screened worldwide, and Kong: Skull Island turns out to be – by all means – a cinematic experience on another level!

1943, World War II. An American and a Japanese pilot are shot down on Skull Island in the middle of the Pacific ocean; after finding each other, they embroil in a savage physical fight, which does not last long as they find themselves facing an overgrown gorilla-looking creature. The film’s narrative – without any explanation as to what might have happened to the pilots – quickly moves to the 1973 Washington, where the local senators try to prevail over the ‘flower kids’ who are protesting against the American involvement in the Vietnam war. Concurrently, the U.S government necessitates the United States Army to slowly withdraw from Indochina. And while everyone is going insane over the war events, William Randa (a short, but well-executed performance by John Goodman) – an eccentric member of the government organisation Monarch – is given permission to organise a scientific expedition to the unknown Skull Island to find a mysterious monster. Together with a group of specialists, including James Conrad (Tom Hiddleston), a tracker and ex-British Special Air Service Captain, Houston Brooks (Corey Hawkins), a geologist, and Mason Weaver (Brie Larson), an anti-war journalist and photographer, along with U.S troops lead by Preston (Samuel L. Jackson), they leave for the island. And what they are about to find on that far-away, uncharted patch of land, will vastly exceed their expectations.

Undoubtedly, with the great use of the modern cinematic tools – I am talking about CGI here – to depict another story of the great ape, Jordan Vogt-Roberts created something worth watching. In addition to a tolerable storyline (not the most ambitious one, but fairly engaging), with solid acting and occasionally witty dialogues, Kong: Skull Island comes together as a wicked adventure feature. I submerged myself in the robustly entertaining film with really beautiful shots; some of the locations are breathtaking, and the colourful filters used for graphics build a unique ‘olde-worlde’ feel. Having said that, I have to admit that the film has a few weaknesses as well; I think the biggest issue is the script; there are some flaws in the narrative and as a result, a few scenes here and there are slightly out of place. But yet again, one – as a viewer – can ignore them as there is enough cool action to pay attention to. 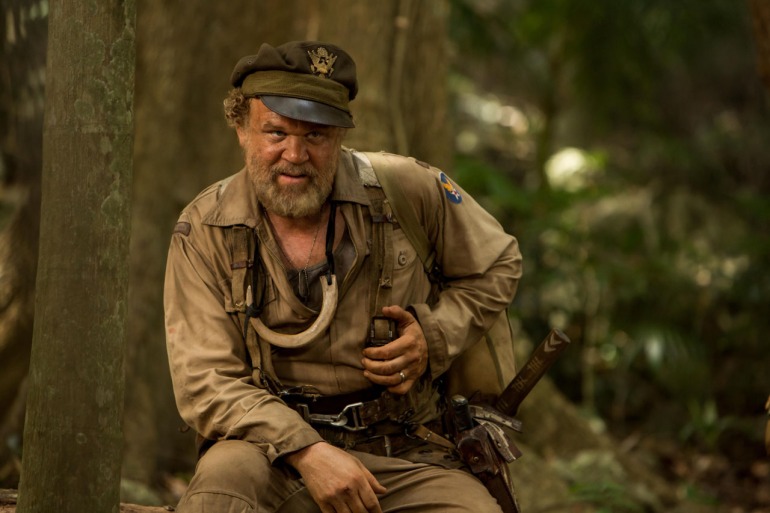 The director gathered a great assembly of actors, including Tom Hiddleston and Brie Larson, the currently much sought-after Hollywood actors. After watching the first trailer for Kong: Skull Island, one would have thought that they will play the first violin; but even  with their well-built performances, the mighty CGI Kong’s appearance takes over it all. The ape is – without a doubt – the driving force of the film. There are a few actors who were devoid of opportunity to show their acting skills, simply because they did not have enough screen time, and that includes John Goodman, who lost his chance to showcase his talent as he only had 30 – or perhaps 40 – minutes in the film. Fortunately, apart from Hiddleston and Larson, there is still more sparkle on the screen: Samuel L. Jackson and the – surprisingly – funny and charismatic John C. Reilly’s character, who really adds to the film. It is obvious that editing, the CGI Kong and the other crazy-looking monsters, along with music and cinematography, will not go unnoticed; technically speaking, Kong: Skull Island is really well made.

Jordan Vogt-Roberts, with this film, proves that he knows how to get the audience in an ecstatic mood as they watch the film. Kong: Skull Island has divided the film critics and the audience; however, to me, even without a first-class narrative, it is – first and foremost – an entertaining action-packed adventure film with (I  never thought that I would say this) excellent CGI effects. Kong: Skull Island is worth watching on the big screen; not only for the fun of it, but also for the resplendent Kong.