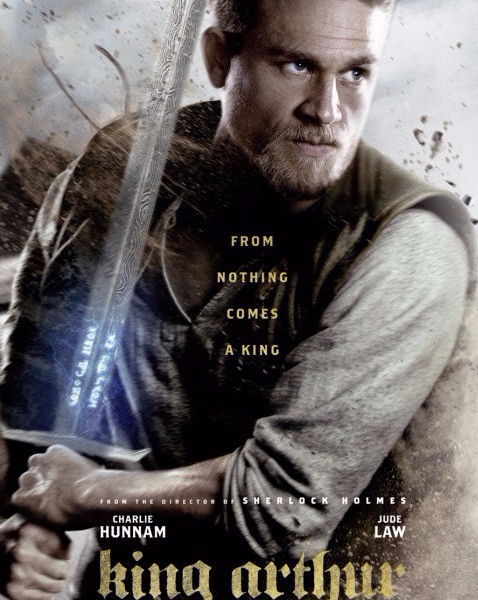 The legend of King Arthur has been sparking the imagination of Britons for years; he is one of the biggest folklore ‘heroes’ of the British literature and, consequently, cinema. Historically, we do not know much about the existence of King Arthur; that said, the most important creator of Arthurian legends was the English historian Geoffrey of Monmouth, who in 1136 wrote The History of the Kings of Britain. As it turned out, for many years to come, this book inspired the imagination of many writers, filmmakers, and also scholars to write more about King Arthur and to find information about the legendary ‘ruler’. Geoffrey of Monmouth’s book contained various invented stories, but there was also a grain of truth to them as there are other books out there, e.g. X-century Annales Cambriae, that describe the period in the 5th/6th century in which King Arthur might have lived. I’ve lost count of how many King Arthur films have been made so far and – in all honesty – I wish they would stop making them because as more and more of them come out, with their thinning script-writing, they give off a growing feeling of emptiness; and unfortunately, Guy Richie’s newest work – King Arthur: Legend of the Sward –  is just another in this line.

The first thing that came to mind after watching King Arthur: Legend of the Sward was “What did I just watch? Was it a DC Comic’s King Arthur (for some reason he was as fast as Flash when he touched the Excalibur)? Or was he an English Bruce Lee? This Arthur is incredibly skilled for a 5th-or-6th-century man. Frankly speaking, I considered if I should even write anything about this ludicrous film. But let’s give it a go…

Who is Arthur (Charlie Hunnam – the only actor who tried to deliver well, sadly, Sons of Anarchy‘s man disappointed me with his average, confusing accent and with his not-so-much-charismatic acting) in Guy Richie’s film? We first come across Arthur when he is a boy, living in a castle with his loving father (Eric Bana) and mother, and his not-so-very-honest uncle Vortigern (portrayed by Jude Law – a boring, weak performance, devoid of any honest emotion). After Arthur’s father gets killed by unexplained supernatural monster, the boy manages to run away before also being killed by the greedy Vortigern. Years pass by, and Arthur, now a grown man, is a thug and a thief – there is nothing noble about the man who is supposed to become the King; his uncle is the one who currently reigns the kingdom. At this point, the film turns into a mess! Richie’s super fast camera work, jumping from one frame to another, made me confused about what was happening on the screen; and the dialogues (very typical for Richie), oh boy! It was like living in a gangster’s den with all the swear words, primitive exchange of ideas and so on and on – my brain went into an overload, screaming “get me out of here!”.

Vortigern discovers that his nephew is alive; he arrests him and sentences him to death, just because he can. Predictably, Arthur is saved by his thug troop including Sir Bedivere (Djimon Hounsou), a leader of the resistance against Vortigern. And soon, the big “happy” family decides to fight the evil King, with the magic sword and Arthur’s skills, while everyone seems to think he will be their saviour (hear me giggle) – of course he will be their saviour)! Do not get too excited as this part of the film is badly written; it felt very flat and clay-brained. Did I mention that even David Beckham tried to act? Yes: he tried to act (please stick to football coaching). A question arises: What on earth was Guy Richie thinking by casting a footballer with an English accent that no one can even understand?! I am going to finish here as there is no point in writing anything else; the whole production amounts to a demented film, with mediocre CGI, tiresome characters, it is very male-orientated and simply horrendous! Do not waste your money or time to watch it; it is enough that I lost over two hours of my precious life on it.