The 25th Raindance Film Festival: In Conversation with Matan Yair, Director of ‘Scaffolding’

Matan Yair had been teaching literature in Israel for almost a decade before he made his feature debut Scaffolding. While teaching the subject, he came across individuals from various backgrounds – including challenging youngsters. Matan Yair believed that he could inspire his pupils by letting them follow their own path of self-awareness, by reading poetry and books. One of his students was Asher – his circumstances and persona inspired Matan Yair’s Scaffolding. The film was shown at this year’s Raindance Film Festival in London, where it was met with a positive feedback from the audience; we caught up with Matan Yair himself and talked about the process of making Scaffolding.

Was there a particular moment in time when you decided that it is time to leave the teaching job and move on to filmmaking?

I am actually still teaching; as of 1st September 2017, I’m back to teaching after taking a break for a year to make Scaffolding. That said, I’ve always wanted to make films, ever since I was a 10-year-old boy. The turning point happened when I saw Deer Hunter and Taxi Driver; something inside me just told me to make films. I also had a big poster of Travis Bickle, Robert DeNiro’s character from Taxi Driver, on the wall, and whenever I went to bed, I made a fist towards the poster and said to myself “One day I will make a film.” As you can see, I have always felt passionate about films. However, due to my life circumstances, it took me a while before making my first film. But I always knew that I was into writing and, while teaching at school, the story of Scaffolding came up. I knew that I could combine two things that I like to do: teaching and making films.

It is a combination of things; as a teacher, I sometimes find it hard to understand what I am suppose to do in certain situations. Working with kids from underprivileged backgrounds, some with learning disabilities and some with serious behavioural issues, most of them drifters… I wonder what my teaching means to them. While working with them and encouraging them to read poems and books, I wanted to show them the beauty of literature; after awhile, I understood that I am there to create a connection between the outside world and the one within the school. I was thinking a lot, analysing a lot and through teaching and observing my students, one of them in particular – Asher, I wrote a novel which was mainly inspired by that young student. It took me 4 years to write the book, which will be published this year in Israel, and based on that novel, I wrote the script from Scaffolding. 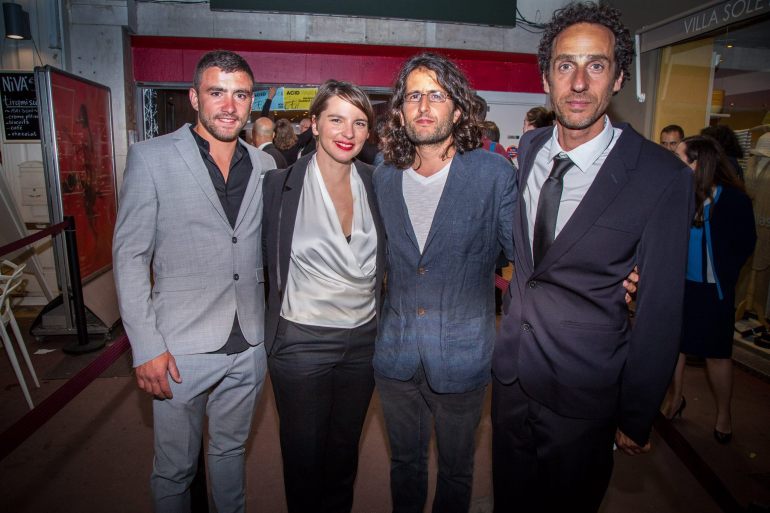 Matan Yair with the cast of Scaffolding

You chose Asher Lax to portray the role of the student, a characterisation of himself, in your film; he is a young man who has never acted before. What was the process like?

The process started when I begin to write my book. I told him about the novel and then about me writing the script, and that I would like him to be in it. He didn’t say no. When he left the army, we both sat down and went through a few scenes, and I asked him if what I wrote was close to his persona; the words, the characterisation of his behaviour etc. I have noticed that he felt very comfortable about it; I also told him that acting is about listening to each other and about reacting to the person who you are having a dialogue with, and just to be natural and aware of what is going on. Throughout filming, Asher showed an ability to move from being very kind, soft and tender and become a very angry individual; he did it very naturally – his moving from one emotional place to another was very authentic. I am glad I stuck with my gut feeling and chose Asher for the role of Asher.

Scaffolding, to me, is a compelling picture of self-discovery and a portrait of a deep relationship between a father and son. Was the film’s subject matter how you envisioned the film from the very beginning?

I didn’t think that my the story was that much about self-discovery; I honestly thought about this young man, Asher, being torn between the two worlds: the world of opportunities that are out there – he can’t grab onto them as his relationship with his father stops him from doing so; in the teacher’s world, he could learn about education, culture and chances in life. I also wanted to make a film about the relationship between a father and son; I did have a vision in my mind about this particular topic, along with the picture of the last scene, as well as the moment when Asher asks his father a few profound questions, questions he couldn’t ask before. However with the help of his teacher Rami, Asher finally manages to express himself. That’s was my aim, an emotional vision of the relationship between a father and son. I also wanted the film’s ending to be kind of poetic, with a different pace and energy.

What message were you trying to get across to the audience with the story of Asher?

In all honesty, when I was writing the script, I wasn’t thinking of a message I would like to get across to the audience. I just wanted to tell a story I was interested in, a story that has a beauty in it. The word ‘beauty’ is important, I don’t have to justify the beauty here, I could feel it throughout the film, and I just hope the audience can feel it too, to enjoy the story and the development of Asher’s persona… This film is about humanity, people and relationships; it is a film that addresses the deep questions about life. 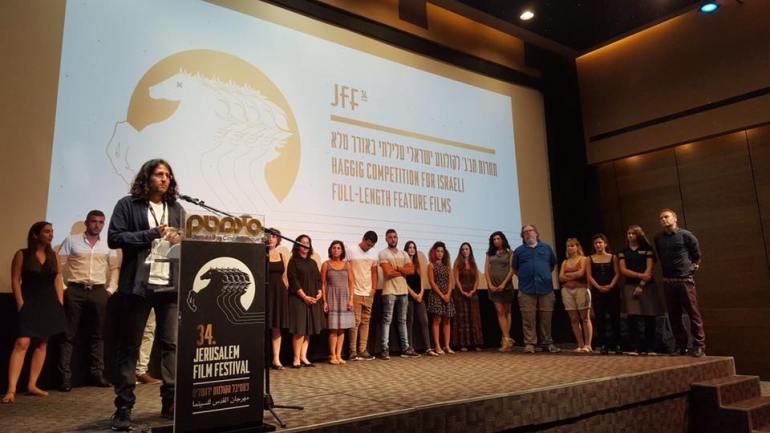 Production-wise, what sort of challenges did you face while making Scaffolding?

The biggest challenge we faced were all the school scenes. We only had a few days to film them, when the school was off for religious holidays. We had many scenes to shoot per day, and to shoot a good scene, we really had to think everything through, we had to analyse how we wanted it filmed, what was missing in the scene etc. The kids at the school – they weren’t actors at all – sometimes forgot that we were making a film; after a few hours of filming, the pupils became restless and they didn’t pay attention to what we were supposed to be doing. Handling all those kids was hard at times. In the end, we just had to let them be. Apart from that, everything went well; it was a good experience.

After watching the film, its narrative left us with some room for interpretation – I saw Scaffolding as a great allegory of Asher’s life – one can go all the way up (with his education) or stay at the bottom doing nothing, the decision being all his. Was that your intention?

Interesting question. I do like to hear the audience’s viewpoints on that, I am very open to any interpretation and – that said – I have heard various versions. Some said that Scaffolding was a metaphor of Asher’s identity building up while Rami’s is falling apart. Another person mentioned that Scaffolding might be an allegory of the current situation of the state of Israel and so on. To me though, the word ‘scaffolding‘ brings an image to my mind, an image that is rough and tough at the same time, rough and tough like the world. Scaffolding as a material that is put next to a building – to me, it feels like there is some mysterious relationship between the two; you never know if a house is to be built or if it is to be demolished; there is something unknown about the presence of scaffolding itself.

Some people say that films evolve through a creative process – at times, also through the tough process of editing. Have you encountered this while making Scaffolding? Are you satisfied with the final product?

I worked with Dov Steuer – an editor – on Scaffolding. I must admit it was a challenge, as we are two different individuals with different viewpoints and visions. Dav is a very strong-minded and outspoken man, while I am more of a thinker and an analyser. Even though we are very different, we do like each other, and we loved having discussions about the film and its process.

When we finished filming, I took a month off, I didn’t want to see the film, but then I returned and saw the first rough cut. Dov set the pace of the film during his editing; he adjusted the first scene of the film differently to what I would have liked it to be, and I had a bit of difficulty accepting it. Nevertheless, I wanted to give the freedom to other creative minds, like the DoP, the actors and the editor – I realised they could bring their own personalities into the project as well, but – of course – it took me awhile to get used to it. There is no doubt that Dov added something special to the film with his editing – thanks to his spotless work, there is this incredible fluency to Scaffolding. Of course, we did have discussions about the editing process, how the scenes should look like in terms of the acting, the pace and so on. Now, after the film has been released, I am really satisfied with the final product as people enjoyed the film.

What’s next for you? Are there any new projects in the pipeline?

Of course, I have been writing almost every day for the past 20 years. (Laughs) I am writing about the things that interest me. I keep track of things that happen to me, of my emotional state and my family. I am a father to two daughters now, and I am working on a story of a father and a daughter who have to deal with separation. I am in a process of writing the script at the moment. I do hope that we will have another interview in two years’ time when I make another film. Thank you very much.

View of the Arts would like to thank to Green Productions Distribution for arranging the interview.

All Photos © Courtesy of the photographers

Film, Film events and festivals, Foreign Films, In Conversation with