In Conversation with Fanni Metelius, Director of ‘The Heart’

This year, the 15th Crossing Europe Film Festival Linz gave us an up-and-close look into the exciting world of the new Swedish female feminist film power. They screened three exceptional debut films, largely made by female crews: a spirited documentary about a rising LGBT hip-hop star, Silvana (Sweden, 2017), an inspiring fiction film Beyond Dreams (Dröm vidare, Sweden, 2017) and, in the competition programme, The Heart (Hjärtat, Sweden, 2018), a bold and witty first feature about sex, love and becoming an adult.

The Heart begins beating at the point where most films about “love” end – when the main characters, Mika (Fanni Metelius) and Tesfai (Ahmed Berhan) decide to start a serious relationship. This is not a film about the thrill of a chase, but rather a film that meticulously explores how the relationship develops over a substantial period of time. The research is done in circles and each spiral goes deeper and comes closer to the truth. This may sound a bit daunting, but the film’s journey to the truth is actually very light-hearted, colourful, fiery and fun.

The star – or rather, the heart of the film – is Fanni Metelius, who acted as the screenwriter, director and editor, and also took on the lead role. Fanni started studying film when she was in her 20ies. At first, she wanted to be an actress, but soon realised that, instead being chosen to act in other person’s stories, she wanted to tell her own. Her first short film Unruly (Banga inte, Sweden, 2011) was shown at Berlinale. After that she applied, and was excepted, to the film school in Gothenburg, one of the best films schools in Sweden.

At the 15th Crossing Europe Film Festival Linz, we talked about her journey so far and about her exceptional first feature film The Heart. 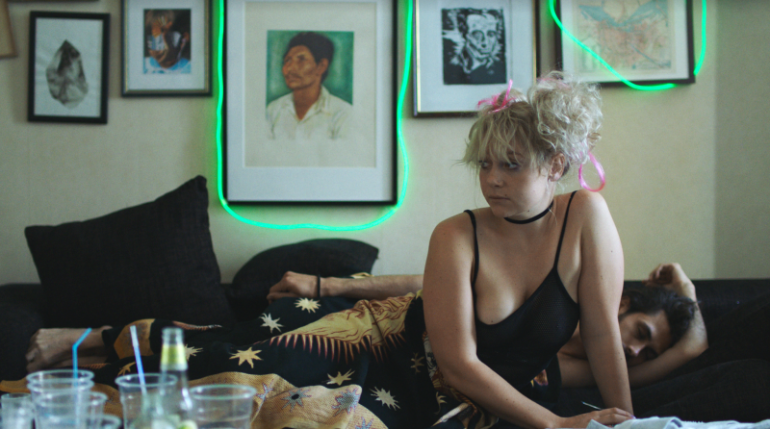 What was your experience at the Gothenburg film school?

Gothenburg film school was a great school for me. It is very artistic and I learned to think about film from a new perspective. During my time there, I was learning a lot about how I wanted to be a director, how I wanted to work with actors. They made us think a lot about the moral responsibility that we have as directors and how people are affected by the films we make. We had a lot of theory and philosophy. I gained new confidence as an artist. I thought I wanted to learn how to make films that people will like, but during my education, I started to think more about what is missing, what feels interesting and how I can create something new.

You decided that you don’t want to be a professional actress and moved to filmmaking instead. And then Force Majeure happened.

Force Majeure came unexpectedly. I did some acting occasionally, I acted in some short films because my friends asked me and because it is fun to act. I was in a short film called The Sexual Monologues (Sweden, 2011) and I think that casting director for Ruben (AN Östlund) saw it and asked me to try out for the role in Force Majeure (Turist, Sweden/France/Norway/Denmark, 2014), and I got it. I was not sure if I should take it – because I needed to think about my graduation project – but I am glad that I realised that it was a once-in-a-lifetime opportunity. It was really fun shooting it and I was also very inspired as a director, because Ruben does not make any compromises during the shooting; he always follows his vision.

The Heart was inspired by some very personal events and 52 pages of poems. How did it all begin?

After the first year in film school, I had a bad break up. I was also reading a lot of feminist literature from the 70’s and watched a lot of films. And I realised that I could not see myself in any of those stories, I didn’t see what I experienced anywhere. So, I started to write about our relationship. I wrote a poem and then another, and in the end, there was a story. In those 52 pages of poems.

I did not see how this story could ever be filmed, I did not know how to show all these psychological layers and subtle emotions. It seemed impossible. But then I realised that often with the male protagonist, we fill in a lot of things by ourselves – we don’t need all that information – but when it’s a woman, we have to explain so many things. And I asked myself why I felt the need to explain her and decided to write my female lead as I would write a male character.

In preparation for the movie, I also interviewed a lot of young people. I wanted the story to be bigger, not just about my experience. Then I started to put all those poems and bits and pieces from the interviews together.

Why did you decide to act in your own movie?

When we started to search for the actors, all I knew was that I need good chemistry between the two lead characters. For the role of Tesfai I needed a guy who could bring life to this passive person, which is a very hard job, and for my character (AN Mika), I wanted someone who can be both sensitive and out there. I found some girls that I really liked, and there was one girl that was great in every dialogue. But then I wanted to try the masturbation scene that comes near the end of the film, and it just didn’t feel right.

When I was directing her, I remembered how vulnerable I felt in the position of wanting to be an actress, and it felt wrong to ask her to be sexual in front of the camera. I thought a lot about how to make the sex scenes from a feminist point of view, and when my teacher suggested that I should play the role myself, it just felt interesting.

Having a female DOP shoot the sex scenes and intimate moments, which take up a good portion of the movie, was probably quite crucial? Was this an intentional choice?

I wanted a crew that was committed to the craft and the way we wanted to make the film. I see it as my responsibility as a artistic leader to make sure that we have a diversity thinking while building both crew and cast. Maja was asked based on her curiosity and technical skills, not gender. That said, I’m very proud to have a female DOP on the film!

The film has a very colourful and playful visual style. It reminded me a bit about Spring Breakers and Girlhood.

One of my ideas was to have a visual style of a photo album, like a young person’s Instagram photo album.  Also, a lot of scenes are shot in the apartment, so we needed to create more energy in those vividly colourful party scenes. We also had different colours for different time periods. The camera was freer when we were shooting outside and more set in the apartment, to create a more claustrophobic feeling. We had some references, but more like in colour and lightning. We were following a lot of bloggers and gathered a lot of input from them. I was trying to get away from this grey and blue look of the traditional arthouse cinema. I wanted to have a more human aesthetic.

It is refreshing to see a character that is so open about her sexuality, that is very playful and fun, but also emotional and smart. We usually get one or the other.

I agree so much, and I always miss that in films. There is this corny girl that is very sexual or there is a really deep, smart girl and she is just kind of not sexual. What I tried to do in The Heart was to put something that I haven’t seen before in every scene. I was also very conscious about how females are portrayed on screen. And with the sex, I tried to be serious in a good way – even if she is very comfortable and playful, sex means a lot to her, it is important to her and that is what I was trying to show.

Written and interviewed by Ana Šturm

All other photos © Maja Dennhag

Film, Film events and festivals, Foreign Films, In Conversation with