Chen Yu-Hsun dishes up a lively and lovable comedy-drama with this New Taiwanese Cinema classic. Originally released in 1995, Tropical Fish encapsulates an authentic and personal look at Taiwanese approaches to family-living and the nation’s harsh school system. Mocking how concerned families are with school exams and how ludicrous the studying regime for adolescents can be, it’s a biting and insightful watch.

Tropical Fish follows the fairy-tale-like story of Liu Chih-Chiang, a daydreaming and unambitious teenage boy, who is kidnapped due to his own curiosity. This is several weeks before his senior high school entrance exam. An exam that is crucial to many Taiwanese schoolchildren in deciding what level of quality school they will go to. Once his original kidnapper unexpectedly dies in a motorcycle incident, he and another smaller boy are left in the care of the kidnapper’s well-meaning but foolish sidekick; Ah-Ching. Ah-Ching is lost in what to do with the boys and moves them from Taipei to a coastal fishing village to stay with his chaotic and noisy family. The boys are taken under the family’s wing in a charming and unexpected manner as they wait for the ransom money. 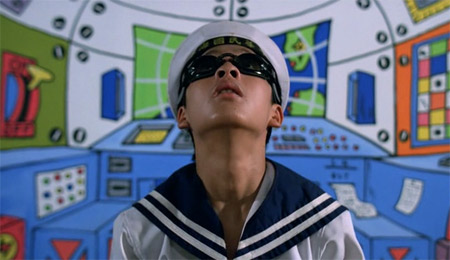 Tropical Fish is a film that is hyper-aware of its setting and what it’s trying to say. Each critique is concise and incredibly culturally relevant. One of the film’s running gags is a frequent showing of news reports on Chih-Chiang’s disappearance. Rather than expressing concern for the boy’s well-being, the presenter instead expresses worry for if he will return in time for his exams. A worry shared by people across the country. It’s an absurd and humorous motif that acts as a sort of inside joke for Taiwanese people, ridiculing their country’s obsession with high school exams and success.

Even when Ah-Ching’s family discover Chih-Chiang has upcoming exams, they work to find him all the studying resources they can and run around the village asking locals questions on maths. It’s ludicrous, and completely reflects the illogical amount of pressure that is put on exam-taking high-schoolers. However funny this may be, the film still ensures to hit on the harsh reality of why a culture so invested in exam results exists. Ah-Ching’s younger sister, Ah-Chaun, is revealed to be a once bright and promising student who had to drop out and work at her older brother’s request. Now she feels trapped and unable to have a career because of her lack of education. She expresses to Chih-Chiang how they are both dreamers, but that her dreams are unlikely to ever take float now because of the cruciality of education in Taiwan. It’s one of the film’s few serious moments but perfectly balances the tone of the film and reveals a darker note about unforgiving school systems.

However, Chen Yu-Hsun still manages to blend this bleak truth in with the rest of the film’s up-beat and lively tone. Smoothing in the comedic and the realistic, Tropical Fish manages to sail on a wave of cheerful visuals and a jolly soundtrack. Producing a feel-good sensation from the most unexpected of subject matters, Chen excels in making an audience howl at human idiocy and fawn over adolescent innocence.

Tropical Fish is a razor-sharp film that is constantly revealing something new or refreshing about what comedy can be to its audience. From its hilarious framing and blocking to its quick camera pans and ingenious use of set design, it’s a film that proves comedy can be so much more than a good script. Although its script is something to be marvelled at too, it’s witty, punchy and produces some fascinating characters. Finding the perfect harmony between empathy and irony, Chen pokes fun with well-meaning and good intent. Its formula and story-telling is timeless, its comedy so universal yet so pin-pointed in what it’s trying to say that all audiences can understand it and love it. Tropical Fish perfectly mixes extremity and fantasy dreaming with realism, to mock and make light of the everyday, and to prove that nothing should ever be taken so seriously.