Chola is an uncompromising and uncomfortable film that attempts to tackle the alarming sexually oppressed female experience of modern India. Yet, while writer/director Sanal Kumar Sasidharan pretties and dresses up the journey with wide, ambitiously beautiful shots of rural Kerala, the destination is left jarringly raw and brutally morbid.

What starts as a charmingly simple story; a young Indian woman secretly escaping to the city with her love for the day, turns very quickly into a horrifying cautionary tale about giving men any degree of trust whatsoever. Janaki (Nimisha Sajayan) is ignored and patronised before she has even uttered her first line, the two other players in the story, Boss (Joju George) and Janaki’s Lover (Akhil Viswanath), spend almost the entire 116 minutes roughly manhandling, scaring, threatening, abusing and blaming her. Early on, Chola provides the viewer with some beautiful snapshots from India rarely seen, rich greens and misty blues fill wide shots of the Kerala countryside, as well as barely dry pit stops filled with hot food and plastic stools in the pouring morning rain. The first half of the film is undoubtedly stunning, slow and breathtaking thanks to first-time cinematographer, Ajith Aacharya, who captures a colder, soaked-through version of India that sparks intrigue and excitement. By the time Chola has shifted into lusciously saturated drone shots over long winding mountain roads, an ominous tone settles into the bones of the film that seems to hauntingly echo the car and its passengers’ descent into a much darker chapter of the story.

Once in the city, there are some quick but promising glimmers of jovial young love. Giggles between the two lovers on a boat, tumbling laughter in the shallows of the sea, snapshots of what could and should have been. All the while, in the background and seeping out of every crack in the concrete jungle is the suffocating weight of male societal and sexual dominance. From a crudely painted naked female form on the back of a barely private roadside lavatory, to the very public, slow, sensual buttoning up of a blouse on a mannequin while 10 other frozen, plastic, powerless female mannequins watch on in silence. The casual apathy from strangers observing Janaki and her painful journey expel any remaining hope the audience might have for justice, redemption or even rescue. “What did you think [would happen] when you came with him?”, Boss shouts halfway through the movie, and it feels like the worlds worst “I told you so!”. 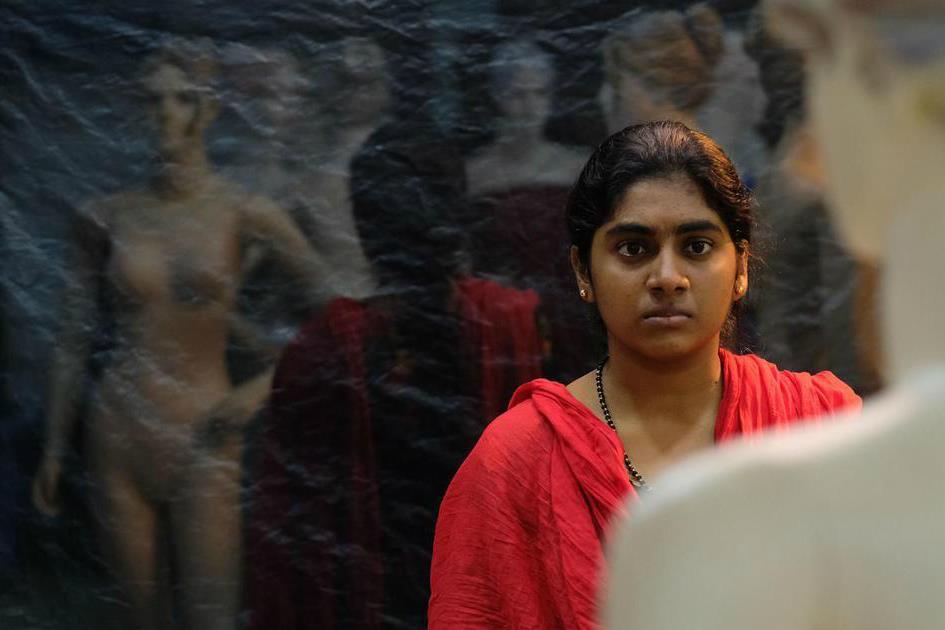 Even with the best of intentions, Sasidharan completely misses the mark. Sasidharan, known to be uncompromising in his storytelling since his last film Sexy Durga (2017), claims to draw inspiration from real-life rape cases in today’s India – specifically the Suryanelli Rape case of 1996. He attempts to interpret the injustices many Indian women face in the modern judicial system through Chola, on screen. However, what should have been a discussion or dissection of the female experience in that context, ended up being the depiction of two men’s reactions to one of them committing horrific sex crimes.

The scenes immediately following the first time Janaki is raped by Boss do not observe her reaction, her pain or even feature her in the center of the frame. Instead, we are handed several drawn-out steadicam journeys up and down the grim staircase of a rundown hotel, following Janaki’s lover as he wails about how hurt he is and the betrayal that Boss has inflicted on his heart as if he is the most important person in that moment. Meanwhile, Boss shows exactly no emotion, takes a few big swigs of some ambiguous brown liquor, shoves Janaki’s lover roughly into the dirt like the weak, gangly nobody that he is and passes out in vile post-orgasmic bliss across the front seat of his car as if absolutely nothing of importance has just taken place.

The film as a whole suffers most from the fact that it feels so entirely male. From the first scene of a flickering candle as an off-screen voice tells the story of a prince hunting for his virgin. It feels fuelled by male inadequacy, as if it is a study of the male reaction to being judged for their treatment of women, rather than a study into the female suffering from that treatment. Janaki is treated and depicted as hysterical and unrelatable, confusing and unimportant throughout the whole film and maybe this wouldn’t be the case if her character was written by a female storyteller, shot by a female cinematographer or guided by a female director.

Chola promises to tackle the social injustices facing India’s women by contrasting beautiful imagery with shocking realism and a light sprinkling of mysticism – but delivers none of that. It is an uncomfortable watch, what should have been a female story is told through such a male gaze that it leaves you feeling like Chola is in danger of doing the opposite of its original intention. “As a man, I understand that there are limits and biases to my understanding of the female experience, and I invite the discussion I hope this film brings”, says Sasidharan. Chola tackles a topic of indisputable importance in this modern world, but fails badly in the final round and the weight of that failure and disappointment hangs around your neck for days after the film has ended.