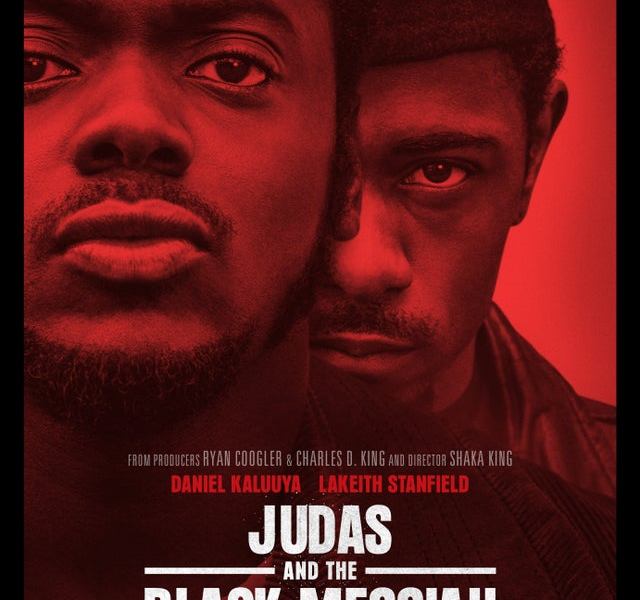 Structuring a biopic around a controversial figure is a near impossible art, with mixed results likely to stem from either leaning into or neutering their status. Judas and the Black Messiah opts to lean into the innate complications of William O’Neal, the informant who worked as a Black Panther mole for the FBI, transforming a deeply unlikeable figure into a pawn in a wider conspiracy. It’s less a biopic so much as it is a paranoid thriller worthy of Alan Pakula, its central figure depicted with a moral complexity that only grows knottier the deeper in over his head he gets. Director Shaka King, alongside co-screenwriter Will Berson, has crafted a complicated character study, an exploration of the internal conflicts of a traitor figure that proves far harder to shake than a straightforward biopic retelling. It will continue to be dissected long after other biopics have been disposed of following their awards season runs.

In the late 1960’s, William O’Neal (Lakeith Stanfield) is caught by the FBI after they’ve noticed his elaborate scheme – posing as an FBI agent, complete with fake badge, in order to steal cars. After his arrest, agent Roy Mitchell (Jesse Plemons) gives him an ultimatum; he can either go to prison for unlawfully posing as an FBI agent, or become an informant, going undercover in the Black Panther party. He reluctantly accepts the latter offer, and quickly finds himself going up the ranks, becoming the personal security for charismatic leader Fred Hampton (Daniel Kaluuya). His undercover mission is threatened by his increased paranoia at being caught – and eventually, something approaching a sympathy to the cause that overrides the political apathy that made him the perfect establishment stooge in the first place.

Judas and the Black Messiah will likely invite surface level comparisons to Spike Lee’s BlackkKlansman, another film probing the conflict between the protagonist’s racial identity and presence in an organisation hostile towards it. Several people, including Sorry to Bother You director Boots Riley, criticised that film as being “copaganda” for this reason – resolving not just the undercover investigation into the Ku Klux Klan, but also the overt racism of the police force, by the time the end credits rolled, allowing John David Washington’s protagonist to continue his relationship with a civil rights activist seemingly without conflict. Spike Lee’s film wasn’t blind to the innate complications of this, but the overarching criticism was hard to refute, especially when made aware of the stark contrasts with the real life case it was adapting.

By the very nature of its true story, it would be hard for Judas and the Black Messiah to fall in the same trap, but it still makes for an interesting companion piece in its exploration of that same internal conflict. Although the real O’Neal never publicly expressed any guilt at his involvement in the FBI operation, the film characterises him based on the accounts loved ones gave following his death decades later; that he was mentally tortured by having to cooperate with the FBI, and being associated with the investigation. This is brought to life by Lakeith Stanfield as the quintessential archetype of the man in over his head, his face always on the verge of cracking into emotional hysteria – struggling to conceal his own identity as an informant, and trying harder still to suppress coming to terms with his own sympathies in this battle. One standout scene, where agent Mitchell spots him being visibly moved by one of Hampton’s speeches, says more about his suppressed conflict than any line of dialogue ever could.

Kaluuya’s mesmerising turn as Fred Hampton commands attention, harnessing the same intensity he brought to Steve McQueen’s Widows, albeit in direct contrast to that character: a henchman on the peripheries of wider corruption in Chicago politics, the furthest thing removed from a passionate advocate of a fairer system. But it’s Stanfield whose performance continues to linger in the mind long after the goosebumps of Kaluuya’s electrifying turn have started to die down. He transforms a detested historical figure into one of the most tragic screen characters in recent memory – and does so while ensuring he never becomes a figure of audience sympathy. Stanfield makes this daunting high wire act seem effortless.

It has become a cliche for critics to describe any contemporary film dealing with issues of race and social justice as relevant to the Black Lives Matter movement. Here, it’s the smaller moments that feel the most prescient; it’s hard not to be reminded of right wingers claiming they’re not racist while unequivocally refusing to support Black Lives Matter when Jesse Plemons’ FBI agent explains why he thinks the Black Panthers are identical to the Ku Klux Klan, or of J Edgar Hoover (Martin Sheen) talking about how the movement is “dangerous”, intercut with scenes of Fred Hampton advocating for free meals and healthcare. The face of white supremacy here is not overt racism so much as it is endless bureaucracy, a system that insists on protecting a status quo detrimental to its own citizens.

But overall, the masterstroke of the screenplay is how it manages to avoid making lazy parallels between period setting and our current era, standing in sharp contrast with a film like The Trial of the Chicago 7, which bends over backwards to tie a period courtroom drama into a Trump era statement. Judas and the Black Messiah feels more of the moment because it’s not desperate to convince the audience of its relevance. The reimagining of this chapter in history as a conspiracy thriller, and focus on a slippery character who reluctantly becomes an establishment pawn, ensures it will continue to be dissected after any discourse cycle has long since wrapped up.

Anchored by two exquisite and wonderfully contrasting lead performances, Judas and the Black Messiah is about as exciting as a biopic can get.