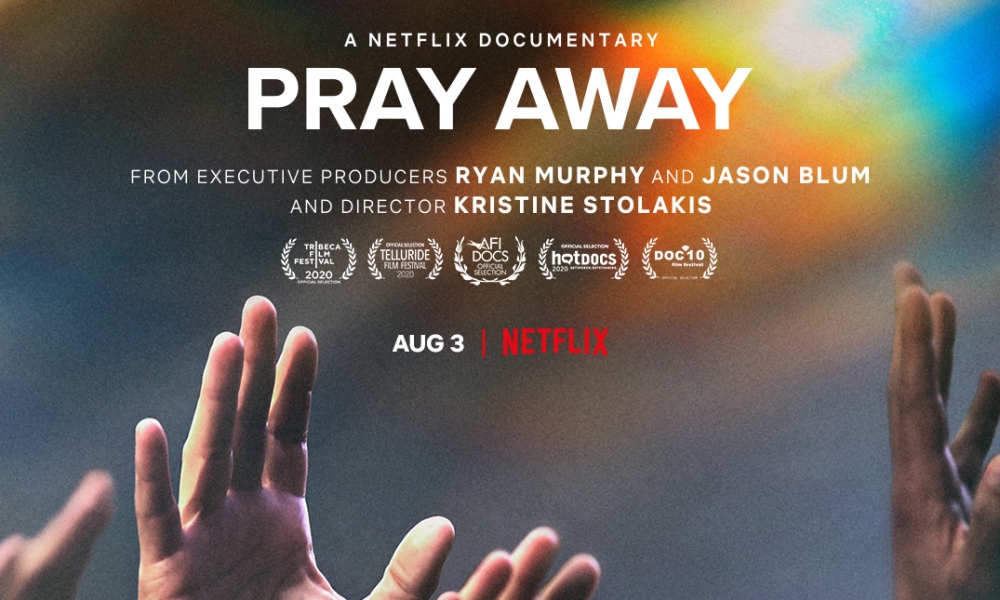 Wandering around a car park, Jeffrey McCall approaches strangers offering to pray with them. With him, he’s holding a placard reading ‘trans 2 Christ’ which shows before-and-after photos of when Jeffrey used to live his life as a trans woman and now where, after discovering Christianity, he lives his life as a straight cisgender man. ‘This is me’ he says to shoppers passing by, pointing to the photos of himself; he talks of previously being ‘really deep in sin’ and how Christianity led him on a path to enlightenment and liberation. An uneasy sequence to watch, it’s painfully sad to see Jeffrey discuss his former self with such loathing and judgement. This is the founder of the Freedom March – an annual march for Christians who describe themselves as being ‘ex-LGBTQ+’ after finding God. Alongside the Freedom March, Netflix’s newest documentary Pray Away also follows the story of the now-dissolved Exodus International – another Christian organisation that arose in the 70s that promoted itself as helping people become ‘ex-gay’. Exodus paved the way for contemporary organisations such as the Freedom March by founding conversion therapies and programmes all across The United States. Directed by Kristine Stolakis, Pray Away is an exposé documentary about the survivors, enablers – and those who consider themselves both – of the horrific practice of conversion and reparative therapy.

Branching across 250 local ministries in The United States and Canada – and over 150 abroad – the damage of Exodus’ wide-reaching grasp can’t be underestimated. Flicking through archival clips, we see leading members of the organisation appear on national TV sharing the testimonies and ‘success stories’ of the organisation. One of them is Yvette Cantu Schneider. There is often a misconception that conversion therapies inclusively target young teenagers or repressed adults who are concealing their sexualities – not proud and open individuals like Yvette who lived as an out lesbian for six years before turning to Exodus. Talking now in retrospect after denouncing the organisation, Yvette discusses how before Exodus she had 17 friends who died of AIDS. Fearful of death every day and attempting to find clarity in the chaotic time that was the AIDS crisis, Yvette sought to repress her grief and detach from the pain of mourning by distancing herself from her community. By finding Exodus, Yvette contends that she found a structure and clarity in such an unclear time; Exodus exploited scared individuals by providing seemingly black-and-white morals and a clear stance on how to make things better and who exactly to blame.

Touching on how the American government horrendously handled the AIDS crisis and reflecting on the fear and shame circulating at that time – but not always going into as much detail as you might like – Pray Away subtly starts to explore the deep-seated homophobia systemically placed throughout U.S government and U.S culture. The documentary even starts examining how Christianity’s power in America relies so heavily on heteronormative nuclear family dynamics – part of the reason why organisations like Exodus were quick to target and attack LGBTQ+ communities. Pray Away also further delves into Exodus’ direct connections with the U.S government – displaying photos of Exodus leaders posing with members of government including George Bush’s senior advisors and a former Speaker of the House. This government recognition, paired with bribed pseudo-psychologists who blathered out false claims that homosexuality was a result of childhood trauma, allowed Exodus to grow to be seen as a legitimate and powerful institution. Powerful enough for the organisation to even, alongside other Christian groups, tip the scale on public vote on government legislation such as proposition 8 – the 2008 state constitutional amendment to ban same-sex marriage in California.

Alongside Yvette, Pray Away mainly focuses on the leading figures of Exodus – the decision-makers and advocates who went out of their way to advertise and promote the organisation. One of these individuals is John Paulk – one of Exodus’ biggest poster boys who joined the organisation after being referred in by a pastor when he was 24 years old. Frequently completing media interviews, John often publicly compared being gay to paedophilia and domestic abuse using the infamous ‘slippery slope’ argument. In 2013, John renounced his support for conversion therapy and came out as a gay man with a public apology about his past in Exodus. Alike every other ex-member of Exodus interviewed, John is profusely apologetic for his involvement in the organisation – claiming it derived from a place of self-hatred and confusion. Another ex-member claims he feels he has ‘blood on his hands’ from his involvement. And while the documentary rightly so opts for overwhelming empathy and explanation rather than damnation, there is an irrefutable damage left behind regardless of these apologies. In one scene, Exodus co-founder Michael Bussee sits down with Exodus survivors to talk about their experiences. He is faced with anger and heartbreak; people tell him how Exodus has completely ruined their lives – ‘I lost my soul’ one man states.

Pray Away does also include the stories of those who enrolled into Exodus at a younger age – such as Julie Rodgers, a woman who was indoctrinated into Living Hope (an organisation under the Exodus umbrella) by her parents whilst she was a teenager. During the day, Julie had supervised contact with the other children but during the night-time she and her friends would stay up late chatting and just being their authentic selves. Julie talks about the comfort in, at last, finding some sort of LGBTQ+ community – even if was full of self-loathing and sworn to secrecy.  Pray Away also includes how Julie was subjected to behaviour modification, enforced femininity (she had to stop playing softball as it was seen as a ‘gay sport’) and being forced to recount sexual trauma on stage at Exodus conventions and even being sexually assaulted by the director of Living Hope, Ricky Chelette, himself. However, the documentary only briefly mentions these occurrences and fails to contextualise how such physical, sexual, and psychological abuse are innate to the violent nature of conversion therapy. Julie’s story is by no means a one-off.

The documentary purposefully keeps its definition of conversion therapy very vague. It certainly includes some of the horrors involved but does not always do full justice to the survivors as it fails to mention the full extent of what conversion therapy entails. It neglects to mention incidents such as electrotherapy – this is done while showing homoerotic footage so individuals can associate being gay with physical pain, exorcism, vomit-inducing drugs, food deprivation, forced isolation, forced nudity, and corrective rape. Of course, no survivor should be forced to recount these experiences on camera, but if Pray Away is directed to be an educational tool – it does miss out a few vital things in order to craft a narrative that makes it easier for audiences to forgive the former leaders and enablers.

Sometimes a little unfocused in its structure, Stolakis’ documentary only really just begins to touch upon the horrific abuse involved in conversion therapy. Although it could have benefited from a more concentrated and detailed focus, and perhaps further insight from those at Exodus who weren’t leaders or in positions of power, Pray Away is a nevertheless moving and earnest look at the reflection and motives of those who both championed and endured the horrors of conversion therapy.