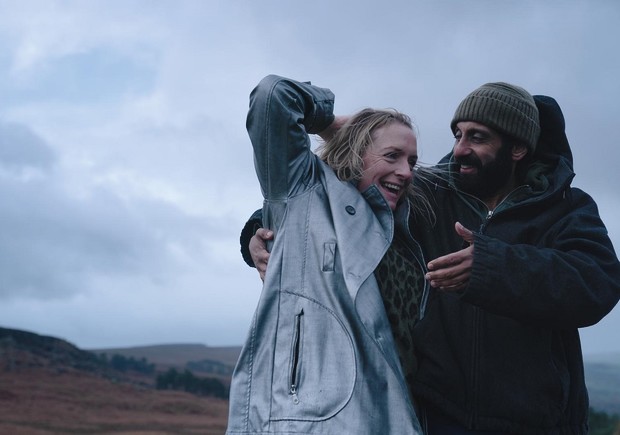 The term “social realism” usually seems like a euphemism for gritty miserabilism in cinema, any feel good films about working class lives usually introducing an aspect of fantasy to proceedings to make them palatable. This might be the reason why any romantic dramas set in Britain revolve around the comfortable middle classes, whose lives are deemed secure enough for any escapism to seem palatable. If you’re not as well off, you’ll be lucky to ever find a love that doesn’t end in tragedy.

Clio Barnard, one of Britain’s most under-appreciated filmmakers, is not the sort of director you’d expect to make such a heartwarming romance. Born in the West Yorkshire town of Otley, her films have mostly taken place within the neighbourhoods of nearby Bradford, all of which have featured less than optimistic portrayals of life in the city. So it’s something of a surprise that, coming out of this year’s Toronto International Film Festival, her latest effort has been heralded as one of the year’s biggest surprises; a grown up love story that is swooningly romantic, especially when it focuses on the smaller moments. There are the usual narrative obstacles along the way that you’d expect from a social realist romance, and these are the few moments where you will roll your eyes at the forced conflict. This is one of the most believably drawn love stories in quite some time, but the regular narrative contrivances designed to keep the couple apart are the stuff of cliche, and frequently detract from the delightfully realised character drama at the centre.

But first, an important disclaimer: one of the protagonists is an empathetically written landlord. This is Ali (Adheel Akhtar), who is still living with his ex Runa (Ellora Torchia), with the former couple having not broken the news to their families – a factor that is in large part because Ali doesn’t want to force her to move out midway through her studies. One day, Ali agrees to take the daughter of one of his tenants to school, which is where he meets Ava (Claire Rushbrook), who works as an assistant teacher there. Ava is a widow, whose abusive husband died the year before, and has a deeply overprotective son determined to make the life of any man who dares look at her a misery. Ali and Ava initially bond over a shared love of music, with Ali being something of a failed DJ, and very slowly their friendship turns into something more, that even the obstacles within their home lives can’t bring to a halt.

Music plays an important factor in Ali & Ava, both as a way of the central couple bonding, but also as a means of escape – which isn’t to say that the depiction of working class life here is particularly miserable, so much as it is mundane. The couple first bond in the car while listening to Ali’s Buzzcocks CD’s, their first personal in-joke spontaneously developing following Ali’s anger that folk (his least favourite genre) is the music Ava loves the most. One day, they find themselves back at Ava’s house, listening to different songs on their individual headphones, Ali insisting the pair both sing whatever they’re listening to at the same time. This is an arresting sequence Barnard captures while fading between the two different song choices, showcasing a developing connection amidst something out of sync.

Irritatingly, this wonderful scene is brought to a thudding halt when Ava’s son Callum (Shaun Thomas) abruptly returns home, violently threatening Ali for trying to get with his recently widowed mother. This is not the only time such a moment happens in the film, and every time it serves only as a disappointment. For a relationship drama drawn on the small-scale moments of blossoming affection, deliberately avoiding depicting pivotal sequences such as the couple sleeping together, the overwrought antagonism they face seems disproportionate to everything else. Rather refreshingly, the hate they do get never stems from the cultural barrier between the pair, so much as it is the worry of how they will be perceived together considering the context of their home arrangements. But Barnard hasn’t placed this within the drama as delicately as she has realised the central relationship, meaning these narrative obstacles never stop feeling jarring.

When it puts its full focus on the central relationship, Ali & Ava has an abundance of charm. What a shame then, that the characters around them are so one dimensional, existing only as obstacles to an otherwise beautifully written romance.