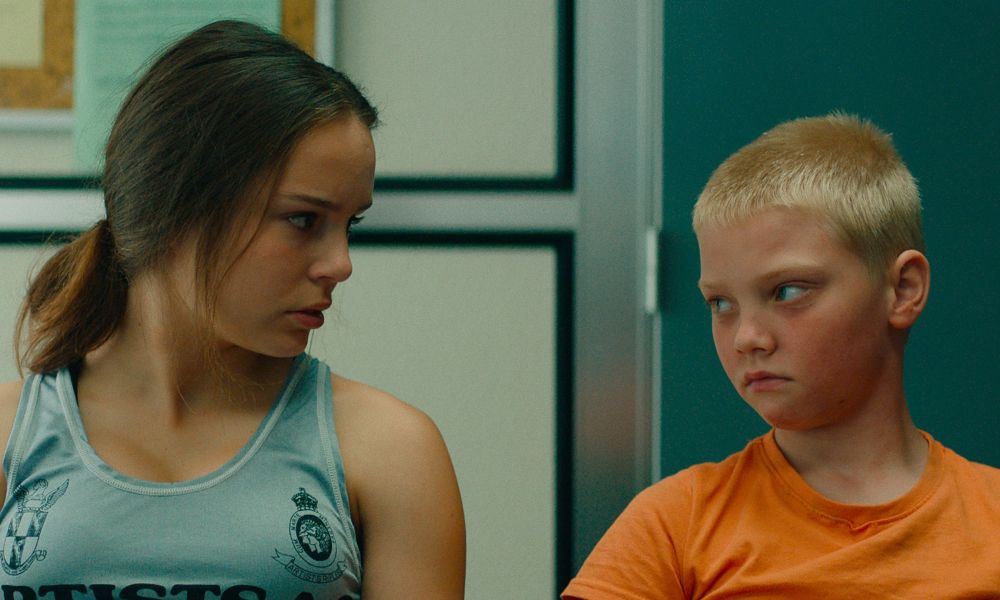 Les Pires follows the story of film director Gabriel (Johan Heldenbergh) shooting his latest feature film in the impoverished suburbs of Boulogne-sur-Mer. His film – under the working title of ‘Pissing into the Northern Wind’ –  follows the life of a young boy growing up in poverty. Aiming for realism, Gabriel and his team decided that instead of casting actors they are going to cast local children from the area they are filming in. They particularly look for children who have grown up in poverty or have troubled upbringings – children the town locals dub ‘the worst ones’. Directed by Lisa Akoka and Romane Gueret and premiering in this year’s Un Certain Regard category at the Cannes Film Festival, Les Pires – translated as The Worst Ones – is a touching and sincere look at the lives of vulnerable children in France, the systems and adults surrounding them, and the morals of making a film with children.

A film that takes inspiration from its own making, Les Pires directors Akoka and Gueret utilised a similar ethos to Gabriel for their own casting processes as they visited schools, children’s homes, and neighbourhood centres looking for new talent. Interviewing hundreds of children and young adults, they drafted their script and story from the words and experiences of the youth speaking to them. This is something evident in the film itself; from natural performances to organic dialogue, Akoka and Gueret’s compassion and care for the children is clear and remains at the heart of the story.

Amongst Gabriel’s troupe is Lily (Mallory Wanecque) a 15-year-old girl who is troubled after the death of her younger brother, Jessy (Loïc Pech) a 17-year-old boy not long out of prison for a hit-and-run incident, Maylis (Mélina Vanderplancke) a young girl bullied because of her sexuality, and Ryan (Timéo Mahaut) a young boy who lives with his older sister after being removed from his mother’s care by social services. The real star of the show is Gabriel’s lead, Ryan, a gentle-faced boy known for getting into fights at school whenever his mum is mentioned. Les Pires follows Ryan navigating his newfound interest in acting and his heartwarming relationship with his older sister. Filmed in mostly close-ups and warm tones, Akoka and Gueret take an up-close-and-personal perspective on the lives of these children. Rather than washing out shots with the cold and hostile greys and blues often found in social realist films, the duo directors try to focus on the warmth and vitality in these children’s lives by examining their families, friendships, and relationships.

Les Pires is not just a film about the lives of young children in poverty, but also about the morals of trying to make a film with disadvantaged children. It’s no doubt that the film wants to tell us that Gabriel’s intentions are pure in wanting to give a voice to these children, but it’s inevitable that certain questions of morality arise when a director wants to use the experiences and faces of vulnerable children for his own artistic and financial gain. Casting local children in the film may be authentic but also brings the children a whole host of unwanted attention they may not have been expecting. At one point, Lily is abrasively confronted at the local carnival for being in a ‘lowlife’ film and she is continuously mocked throughout the film for filming a sex scene. This humiliation and harassment is something that will linger with Lily long after the film crew have left. At one point, Gabriel does notably try to talk to Lily about what things will be like after the crew has to leave but Lily is young, naive, and hopeful and she does not realise the weight of his words.

The film also observes where the lines between reality and fiction quickly get blurred for children. In one scene, Gabriel is directing Ryan in a playground fight scene. When Gabriel does not get the outcome he is wanting – the ‘truthful’ fiction he is aiming for – he gets angry. Gabriel then inadvertently prompts Ryan to use method acting to channel his own trauma and anger for the scene. When Ryan then goes above and beyond his scripted role and things turn more violent than expected, the crew are left shocked and speechless in what to do. This is what happens when untrained crew members don’t know how to work with vulnerable children but do anyway, all in the name of art. Les Pires is very firm in pointing out the theoretical issues that can arise when working with children. However, the film is not outwardly clear in how the directors themselves would handle these issues or what the ‘right’ way of working would be. Every moral issue that occurs in Gabriel’s film could of course easily happen in Akoka and Gueret’s film – creating a meta snowball of questions and debates over rights and wrongs that goes unanswered.

Looking into the lives of disadvantaged children, Les Pires portrays the realities of growing up poor but also acknowledges the filmmaker’s privilege is temporarily being able to step in and out of such shoes all in the name of filmmaking – leaving behind experiences of trauma and distress the film’s subjects cannot. Armed with compassion, Akoka and Gueret’s latest film is an intelligent but not imperfect look at social realism and truth, the experiences of children living in poverty, and the moral conundrums of filmmaking.