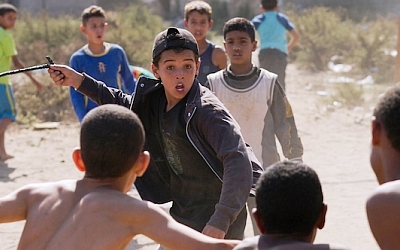 Nabil Ayouch’s ‘Les Chevaux De Dieu’ (Horses of God) was described by The Hollywood Reporter as an ‘intimate portrait of boys growing up in a toxic environment’. Written by Jamal Belmahi, Horses of God is based on a book about the five simultaneous explosions in Casablanca in 2003, and “uses current events — the death of King Hassan II, the attack on the World Trade Center — to explain how dwellers in the Sidi Moumen slum slowly turned towards keeping women at home and tolerating, when not embracing, the rise of fundamentalism”

Three boys are growing up in a shanty-town adjacent to Casablanca’s massive garbage dump: Hamid (Abdelhakim Rachid), a born leader; his bullied younger brother Yeshine (Abdelilah Rachid) and their friend Nabil (Hamza Souidek). They misbehave, smoke cigarettes and annoy everyone in their neighbourhood. A few years pass, Hamid ends up in prison for assaulting a police officer and Yeshine and Nabil eke out a living working for the repellent owner of a small auto repair shop. After two years Hamid is released from jail, he seems to have changed, apparently for the better. The boy comes in contact with an Islamic group, which has diverted his criminal activities bringing him closer to the Muslim religion. After a while Hamid manages to persuade his younger brother and Nabil to join the religious group as well. The boys’ transformation begins. I think Hamid’s character is one of the strongest and well defined by the script, a bully, who comes out of prison as a calm and extremely dedicated, to Islam, individual. Superb performance by Abdelhakim. Yachine, on the other hand, is a young protagonist who presents himself as a weak and vulnerable man until the Iman chooses him to be a part of a bigger plan. Abdelilah’s portrayal of Yachine was memorable and heartbreaking. Brilliant acting from both of them. I couldn’t have asked for more to be honest.

I have to say that Horses of God is a powerfully narrated film and very well balanced. Hichame Alauie’s cinematography adds lyric note to the squalor and Marlivina Meinier’s score builds towards the inevitable heart- wrenching climax of Casablanca. Horses of God was one of my favourite films at the 56th BFI London Film Festival.