Silvered Water, Syria Self Portrait is a film by a Syrian filmmaker Ossama Mohammed, who is now living in Paris as a political refugee with his wife, and a Kurdish activist, Simav Bedirxan, who shot her short videos during the siege in Homs. It has been over 3 years since the Syrian Uprising began with nationwide protests against President Bashar al-Assad’s government. Every day dozens of amateur recordings appear on various social media sites including, the most popular channel, YouTube. Silvered Water, Syria Self Portrait was created by using that footage. After two years of filming and editing the stories, it became a unique, moving and unforgettable documentary.

In was in December of 2011 when Ossama received a message on Facebook from a young woman in Syria. Her name was Simav, and she asked him a simple question: “What would you do if your camera was in Homs? What would you film?” With that question in mind their remarkable collaboration began. Ossama started to edit a vast amount of footage from YouTube. The recordings contained a bloody pacification of demonstrations, bombing of cities and images of victims- wounded and dead. Hams, Damascus and Dar’a, just to name few, were the most affected cities in Syria. People marched hundreds of kilometres in protest against the regime. Destroyed by greed and hunger for power, the Syrian government began carnage. Tens of thousands of protesters, students, liberal activists and human rights advocates were imprisoned and there were reports of widespread torture and terror in state prisons. In the first half, Mohammed uses odd and disturbing, out of mobile phone footage. How he acquired it, is anyone’s guess, since one often repeated shot of a badly beaten teenage boy stripped to his underwear and forced to kiss a soldier’s boot before being raped could only have been filmed by the army itself. 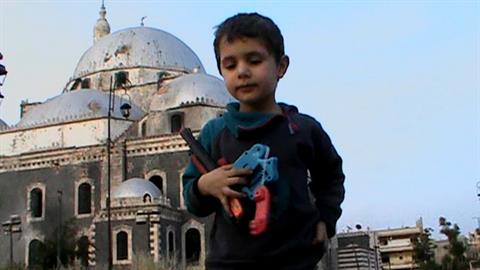 Simav came to a decision to become the director’s eyes on the ground. Influenced by him, she decided to write and document her daily activities in the conflict zone. Through her eyes we experienced fear, determination and unprecedented pain of locals who tried to live their lives in the destroyed city of Homs. She particularly concentrates on the small children she teaches for a while and reflects on their future. Her strength, bravery and stubbornness is praiseworthy. After watching shots of disfigured animals and dead children, men being shot on screen, teenagers tortured in prison and streets flowing with blood, it’s hard to feel anything but outrage against Syrian president Bashar al-Assad and his murderous army. What was this documentary made for? I do believe it had one purpose only; to raise the world’s awareness of what is really happening in Syria right now.

Along with the flawless editing, amazingly modern use of natural sounds and Noma Omran’s music, Silvered Water, Syria Self Portrait is a shattering 90 minute documentary which will make you think that “there is no limit on what cinema can do in the face of the war”. It’s certainly a must see film.