Is online dating the last resort of meeting ‘the one’? Or is it just a place to meet people from around the world and make new friends in no time? 1 World 100 Lonely is the new feature film by Brian McGuire, an American filmmaker, whose work evolves around the aforementioned subject as well as four protagonists who search for a simple thing called love.

1 World 100 Lonely is split into two chapters; the first one tells a story of an American guy (Robert Murphy) who is longing to meet a British Iranian girl (Lava Heller) he met through a dating app. The narrative is interesting due to the intimate description of the couples’ virtual relationship. At first it seems uncomplicated, however, with time, the relationship slowly becomes muddled. In the guy’s eyes going and seeing the girl is exciting yet doubtful, in her mind she thinks he is the ‘perfect man’, a future husband. This kind of relationship could only lead to disaster rather than a happy ending. What I like the most about it, is that their fictional story feels like “true to the life documentary footage” and it wasn’t difficult to relate to their story either. 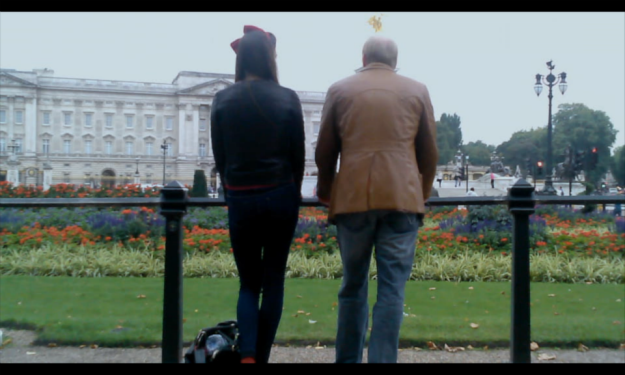 The second chapter is more intense, in which we are introduced to a couple who just split up. A guy finds out that his beloved girlfriend cheated on him, as a result, he falls into depression and struggles to resolve the issue of betrayal. His former girlfriend (Farah Moans) conversely goes on a journey of self-discovery, slowly enduring her life as a single woman, and decides to begin online dating. While surfing the net she meets another lost soul, who she thinks might be suitable man for her. Both decide to meet and slowly get to know each other, without promises and pressure. Interesting enough, the man she meets is the man who already experienced the failure of online dating. Is there any chance for a romance?

1 World 100 Lonely was shot on an Android phone; there was no sophisticated cameras, sound design or even a big crew involved in making the film – it was just Brian, his actors and the phone. Shaky camera pictures that were close to the protagonists at times, will definitely make you feel like you are a part of the film. According to the director, there was no script written: ” The actors were the writers, an extremely small crew of one at time, and no script (…) while putting the movie together, I kept describing the film to people (…).” It is hard to believe that one is able to make film without a script, having said that Brian is a living proof that you can. Technically and aesthetically 1 World 100 Lonely looks slightly amateurish, but the film is not about that, what is more important is the narrative, “a deeply intimate portrait of human relationships and love.” As someone once said: “The meaningful human contacts are definitely big themes in this film.”

The film was screened at this year’s Raindance Film Festival and received good reviews. We also conducted an interview with the filmmaker, Brian McGuire, which will be up on the blog soon.