Try to picture it: Pinewood Studios on a brisk Friday night, the champagne is flowing, and filmmakers, actors, and guests of honour are dressed in their finest. Guessed what the event is yet? No? It’s the Lift-Off Film Festival Awards Show. It’s not quite the Oscars, but it’s the largest independent film festival in the world, so it’ll certainly do.

Celebrating the biggest and best of the short-film world, the Lift-Off Global Network has screened films all over the globe, consulted with the jury, and tallied the scores. Now the results are in. Dozens of worthy candidates are up for awards tonight, in nine categories that look to promote the next directing, producing, or acting talent onto the next stage of their career.

The big winner of the night was French film The Way of Tea, directed by Marc Fouchard, which received four awards for best post production, cinematography, actor, and overall season winner. The film stars Hassam Ghancy in the lead role of Malik, a Muslim shop owner who, when mistreated by a white supremacist, uses tea as a peace offering and show of kindness. The film is moving in many ways, and, especially in light of the attacks in Paris this year, is an important production for showcasing that we must all be kind to one another. 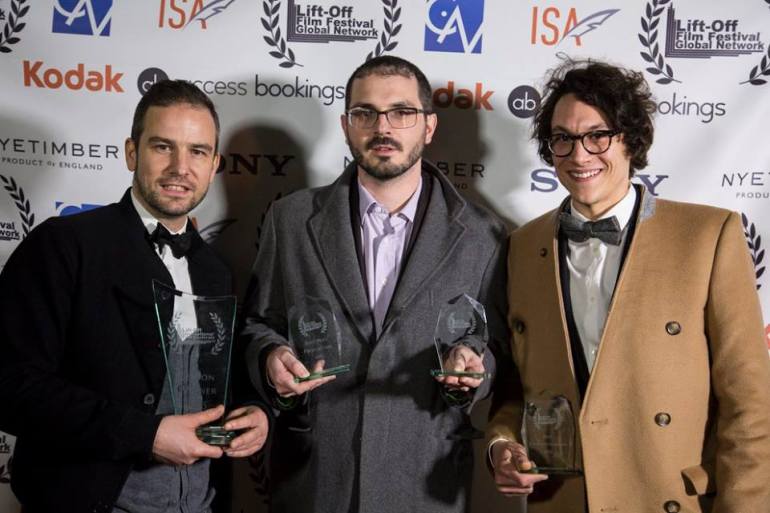 Marc Fouchard, Coban Beutelstetter, and Thomas Collard of The Way of Tea

Alex, Incomplete Faith, by Nikolas Migut, beat tough competition to win best documentary. Presenting the story of Alex, a homeless man that has been roaming the streets of Berlin for eight years, the film’s tough narrative is touching in its simplicity. The award for acting ensemble, meanwhile, was given to the cast of Acoustic Kitty, who starred in a film that had a twist on the spy genre, and centred on a cat turned secret agent, Mr Pickles.

On the subject of cats, the winner of best animation went to Wanichaya Phraejunya and Chawalit Kaewmanee for Nine. The enticing Thai animation, about a cat’s loss of innocence after making a deal with the devil, was the clear choice for the prize because of its stunning visuals and intriguing retelling of Songsin Tiewsomboon’s original story. While, the final two awards for Art Direction and Best Music Video went to the teams behind Him, Upstairs and Gabrielle –More-, respectively.

At the event, co-founder of the festival James Bradley announced that the company will introduce a new short film subscription service in 2016, called Lift-Off on demand. The subscription service will be on Vimeo, and will allow viewers to watch each film that is selected for the network’s global festivals. The service will help introduce filmmakers, and their work, to a wider audience, and all proceeds made by the service will go to them. The Lift-Off Global Network will return with the Liverpool Lift-Off Film Festival in early 2016.