Meet the Patels – no, it is not another Meet the Fockers’ story – directed by siblings Ravi V. Patel and Geeta V. Patel, is a charming and humorous docu-fiction about Ravi, an Indian- American “small time upcoming” actor who is recuperating from his break up with a white girlfriend – who he never told mum and dad about – and goes with his family on their annual trip to India. Raised in a traditional Indian environment where allegiance, probity and harmony are the three pillars upon which Indian families stand and where an arranged marriage is a part of family life, Ravi realizes that it is time for him to look for the perfect wife-to-be.

Upon returning from India, Ravi allows his parents to go through marriage applications; concurrently – in an amusing way – he shows the viewers how the process of arranged marriage and Indian online dating look like; his informal and laughable interviews with various Indian individuals reveal differences between Indian match-making and the one in North America. With the help of his sister Geeta, Ravi goes on a nationwide quest to find the perfect bride; he participates in various speed dating events, The Patel Convention and matrimonial ceremonies. 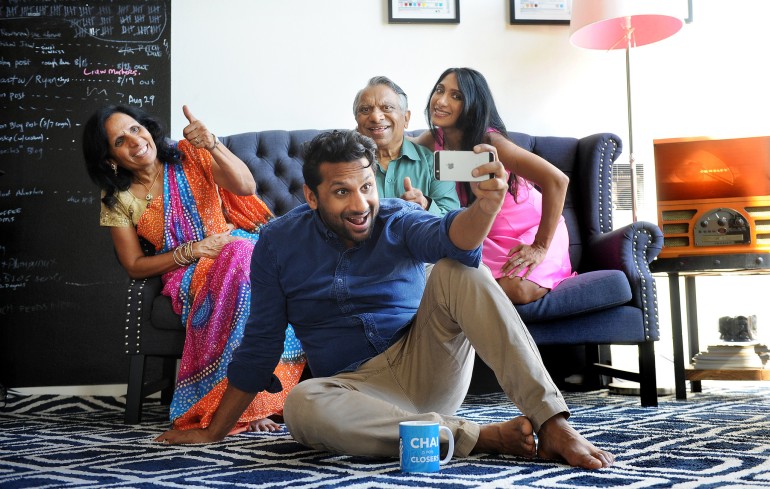 His at times profound conversations about his worries and fears about searching for the right person make the viewer – somehow – become a part of the Patel family. You will immerse yourself in Ravi’s life as you slowly start to follow his journey, which will glue you to your seat. As Ravi said, “I had never seen an audience so emotional and engaged in a way that was deeply personal. This was a cathartic laugh that reached down deep into parts of their body they hadn’t even heard of.” I couldn’t have agreed more with what he said. The occasionally used, delectable yet simple animation will delight the audience as well.

Meet the Patels definitely breaks certain stereotypes concerning Indian traditional process of an arranged marriage, it also shows that it is not as strict as in other Asian conventional countries; this particularly holds true for the Indian community that has settled in the West. Ravi’s parents are the perfect example: “Your happiness is mine happiness,” father exclaims. Through one-of-a-kind, heartwarming storytelling we learn that even the thoroughest decision ought to be discussed with the family, simply because you never known what the outcome might be.

The viewers, after a while, will notice that the film isn’t only about Ravi itself but also about his family. With his “naturally funny” and lovable parents, Ravi apprehends that the universal family values are very important in the family, which includes speaking the truth – the moment when Ravi confesses to his parents about his first love Audrey, the reaction he will get will, without a doubt, amaze everyone – including the audience.

Meet The Patels is a subtle film that will put a big smile on your face; it is also a captivating documentary that might teach you to refrain from stereotyping those who come from rather traditional backgrounds. The film is available worldwide including on We Are Colony, Netflix, Amazon Prime as well as iTunes.

All photos © Meet the Patels