Ronald Emmerich stayed true to his credo and presented us with yet another sci-fi disaster epic movie, this time reflecting back to the days of his past glory and his first global success, the Independence Day, which was the highest-grossing film of 1996.

This past decade has been referred to many as the ‘era of reboots and remakes’, so it was only a matter of time before aliens decided to invade our planet once again. While the sequel (and even a full-on reboot with two films) was discussed for over a decade, the aliens at Fox decided that it was only appropriate to attack this planet on the 20th anniversary of the first attempt – on 4th July of 2016. The film hit the screens a bit early in 2016, but this review is coming out on the D-day itself. Just in case.

Will Smith demanded a pay too high for him to re-save the planet, but the sequel brought back most of the original cast – Jeff Goldblum, Bill Pullman, Brent Spiner, Vivica A. Fox and Judd Hirsch, to name just a few. The members of the original rescue team are joined by the fresh faces – from the popular Liam Hemsworth to Jessie Usher and Maika Monroe in their first prominent blockbuster roles, joined by the young Chinese actress Yang Ying (Angelababy) in her first ever international blockbuster role and the acclaimed veterans Sela Ward and Charlotte Gainsbourg (and many more). The film started its pre-production with a star-studded international cast, befitting the global scale of its story.

Given the success of its predecessor, there was much to be expected. We spin forward from the events of 1996, to find ourselves in 2016 – which is much more tech- and space-technology-savvy than our own reality. The humankind has stood united for the past 20 years, developing a global defense programme using the alien technology (called Earth Space Defense – ESD), with headquarters at Area 51 (har, har) and off-Earth locations on Moon, Mars and Saturn’s Rhea. With all of the progress that’s been made, the humankind feels pretty good about itself, but it has still not forgotten the horrors or the bloodshed that was brought on by the first ‘harvest’. As the planet prepares to celebrate the 20th anniversary of the first victory, individuals that still suffer from the consequences of the first encounter begin to feel uneasy, with all possible visions and signs pointing at the horrible truth: THEY are coming back for seconds. What follows is a string of incidents, coalesced when a mothership, twice the size of the previous one, arrives, positions itself above all of Atlantic ocean while destroying half of the planet in its wake, which immediately starts drilling for the Earth’s core and with it, announcing the resurgence of apocalypse. Add a mysterious alien orb as yet another form of alien intelligence, loads of action and a bus, full of schoolkids, and you have yourself a blockbuster that is trying really hard to live up to the legacy of the 1996 original. And in many ways, it fails.

While the story is everything you’d expect, the story arc follows the structure of the original too closely, only veering off by a few degrees here and there to bring us some fresh air. It is true that unlike the masculinity-imbued original,  we are now – on the surface – presented with a series of strong female characters (even the alien mothership actually has a ‘mother’ – Queen). But eau de masculine is still very much present, as one of the female pilot fighters barely has any lines (Angelababy), while the other is in a daddy’s-girl mode for most of the film and only shows off her fighting chops in the very last show-down. Sela Ward’s female president character, which carried much potential, is gone before we even make it through the first half of the movie. There is a tangible lack of a center – Liam Hemsworth attempts to be it, but there is really no one who would fill the central-character shoes, like Will Smith did – this is a film with a cast of many, which makes it harder for the audience to emotionally invest. The only one that truly brings back some of the former glory is Jeff Goldblum – but let’s face it, we love the guy for his dry-humour delivery, in anything he does. 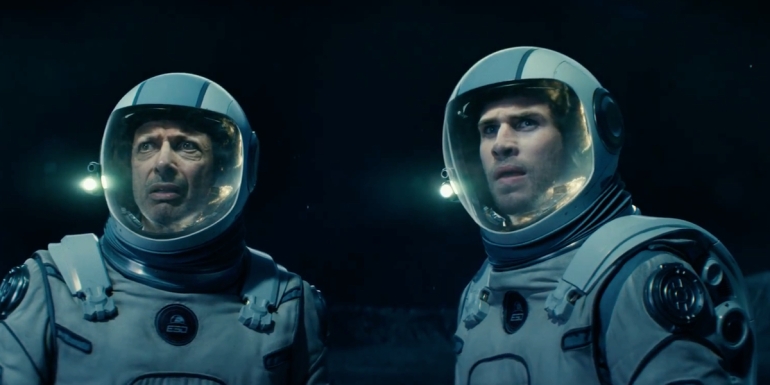 So in terms of quality and freshness, this is a complete and utter failure, with sad glimpses and allusions to its predecessors and creator’s past glory. The official slogan may be “We had twenty years to prepare,” but in reality, the script could have been prepared better. Independence Day was an epic and fun blockbuster which, also with the help of a very successful  global marketing campaign, managed to emerge as the winner of the series of alien-themed films that hit the screens in what appears to be the alien-obsessed 1996 – The Arrival (Twohy), Mars Attacks! (Burton), Star Trek: First Contact (Frakes), and even the half-animated Space Jam (Pytka) are just a few in a series of alien- and space-related films of 1996. On the other hand, Independence Day: Resurgence (2016) is but one in a series of reboots that hit the screens in the past few years, which is – contrary to the message of the franchise – about to go “quietly into the night”.

Still, it IS summer, and it IS 4th of July today. If you’re feeling too much heat and you need the cool air of an indoor cinema hall, or if you feel like watching fireworks even though you’re located outside of USA, this makes for a perfectly good summer flick. You might even unleash a slightly crazy giggle at the destruction of London, set so closely on the time scale to the currently unfolding Brexit drama. And while the story may be set in 2016, it does slightly taste like the good ole’ 90’s …