In Conversation with Lee Dong-eun, director of ‘In Between Seasons’

Lee Dong-eun started his career path as a student of economics and journalism who – like many others – had an idea for a story and a dream to become a filmmaker; unlike many others, he managed to make his dream into reality through hard work and by being unafraid to take the long road: “In Between Seasons” started out as a script, but was first published as a graphic novel in 2013; following the success of his award-winning “My Other Mother” in 2015, another graphic novel created by Lee Dong-eun, the wheels started turning in a higher gear. After receiving recognition, he enrolled into Myung Films Institute and with the support of the Institute, remade his first graphic novel into his directorial debut film In Between Seasons, which received its world premiere as a part of the New Currents section of this year’s Busan International Film Festival. The film received the KNN award for achieving the highest acclaim by the festival audience among the films in the New Currents section.

Among the busy corridors of Busan Film Center, we managed to catch Director Lee for a short conversation before he rushed off to the next screening of his debut feature.

You started your career path as an economics major, then switched to film after the success of your graphic novel – “My Other Mother”. How did the transition happen?

I always wanted to be a filmmaker since I was very young, but that is probably a very Korean situation. But I didn’t major in filmmaking, I wanted to know more about the world, so I majored in liberal arts; I co-majored in journalism and economics. But in the process of that, my passion for film has grown so much that I went into filmmaking.

“My Other Mother” is the basis for your directorial debut film In Between Seasons that is being screened at this year’s BIFF. What motivated you to turn the graphic novel into the film?

Let me introduce the process of it. When I started In Between Seasons, I wanted to make a film, but I knew that it would be very hard to get it funded, so I made a graphic novel – I collaborated with an artist – and  then the second novel, “My Other Mother”, got noticed and won an award. That was the chance that I got to make “In Between Seasons” into a movie. My next project, the book called “You And Me Both”, is a graphic novel as well, but it also started as a film script. But I talked it over with the artist and we agreed to again first release it as a graphic novel – it came out just this October.

You graduated from the Myung Film’s Institute, which was established only in 2014. What was it like, being a part of the Institute’s first generation?

There are a lot of hardships in making a low-budget film. It’s the same case as for any other independently produced film in Korea. Because of the characteristics of this Institute, the cinematographer had to be from the same school, and the art director and production designer, and other members of the production team were also from the same school. So we had our problems, it was hard at first because this was the first film that the Institute produced, but it was just the normal process of making an independent film.

The filmmaking programme of the Institute has two school years. In 2015, it was all about pre-production. We talked about the scenario that I wrote with my colleagues and also with the production company, and we started the production process early this year, we did casting and filmed, and did the post-production.

On the process of casting – this is your debut feature but the film has an impressive cast – Bae Jong-ok and Lee Wong-eun are quite famous. What was the casting process like?

From the start, I really wanted to work with Bae Jong-ok. But I at first doubted that it would be possible because this is my debut film, and it was really low-budget so I doubted that she would accept the role. But after deciding that I wanted to work with Bae Jong-ok, I read the script with her in mind, scene by scene, for the role of Mee-kyung, and it clicked. There is not a single scene where Bae Jong-ok wouldn’t fit into the character. The production company called her and thankfully, I was very lucky, because she accepted right away. As for Lee Wong-eun, the production suggested him first for the role of Yong-joon, and after that, I researched his work. In Korea, he’s called “a guy straight out of the comic”, which means that he’s very pretty, very handsome. Even in person, he’s such a pretty boy. When I met with him, he was very passionate about playing Yong-joon’s character, saying that he could understand him and he was also very sympathetic to the character’s struggles, so I thought to myself that I need to trust him to portray Young-joon’s personality – more than his outer appearance – and it worked out very well.

You’ve seen your characters come to life – is the film what you imagined, or is the end product different from what you thought it would be?

I’m very content with the final product. In terms of my imagination and the final characters … Mee-kyung is exactly as I imagined when I was writing the script. In case of Yong-joon, like I mentioned before, in the end, it was more like Lee Won-geun’s Yong-joon than who I thought Yong-joon would be at first. And I think it worked out really well. That was my mission during the production process. And as for Soo-hyun, played by Ji Yoon-ho … it was his first feature film, but he is a very talented actor, and if I thought something about the character, he did even more, the character was even more alive in the film than I thought he would be.

LGBT issues may currently be in focus of many countries, but they are still not discussed openly here in Korea. What was the reason you decided to tackle this particular topic?

In major Korean films, LGBT issues are not talked about, but when I submitted this script to Myung Institute, and when I talked about this with people involved in the production, it was suggested that we should put more focus on LGBT issues. They were saying “oh, why don’t we focus more on the queer aspect of it, express it more in this story, it would make the film more sensational,” but I was opposed to it, I didn’t want to make a sensation out of it, I really wanted to focus on the relationships, on how one can relate to another. Also, even if they are in minority, LGBT people exist and there should be more films that deal with these topics. I thought this was a story worth telling.

Which of the characters in the film do you personally relate to most?

Of course I can mostly relate to Mee-kyung because I started the film with her point of view, but as for the characteristics and how one can relate to the society, I am more like Yong-joon, the dark side of him.

You tried your hand both at storytelling and directing; which side has the most appeal for you?

I think that’s the question that I always carry with myself, something I’m still thinking about. There’s the director Lee Dong-eun and the writer Lee Dong-eun and I’ve come to think that these two people should make peace. When I was directing this film, the mission for me – this was written five years ago – was to keep trying not to forget what I felt like when I first wrote this story. I tried to really hold on to all those emotions and all those details. Also, when I’m writing, I have it in mind that this will be a film someday, so I also need to think about it in terms of filmmaking, even when I’m writing.

Since I saw the film, I’m curious. What made you decide on that particular ending? (Spoilers ahead!)

I always thought about this film as a triangle form. Throughout the film, there was not a single scene where the three of them are happy – throughout the film, whenever they would dine, two of them would eat happily, but the third person would just watch them. So for the ending, I wanted to put all of them together and have them dine together as well. And I wanted Soo-young to look at the other two characters that were previously looking at him.

Do you have any projects already in the works, and what are your plans for the future?

My dream is to keep making my scripts into films, and because I can’t make the films alone, I hope that there will be investors, and production companies to work with. In terms of what I want to talk about, I think In Between Seasons is a family film, and I want to keep talking about special families. Not whole, not perfect, but special.

Thank you so much for taking the time to do this interview! 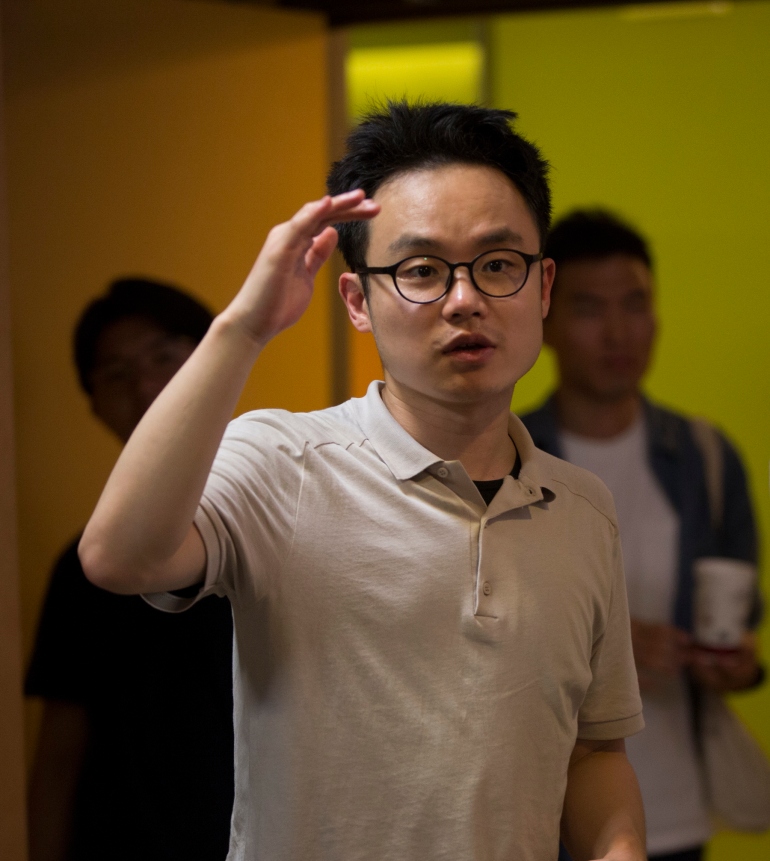 In Conversation with, Korean Cinema