In Conversation with Maude Hirst of ‘Vikings’

Maude Hirst, the daughter of Michael Hirst – a screenwriter and producer (Elizabeth, Elizabeth: The Golden Age, The Tudors, Vikings) – started her acting career with the role of Sophie in 2008’s Crush and Curry, a fast-paced comedy drama which was followed by 2009’s Nuryan, where she portrayed Ellie. From 2008 to 2010, Maude played Kat Ashely in the highly successful BBC TV show The Tudors, alongside the heart-throbs Jonathan Rhys Meyers and Henry Cavill. Currently, the actress is a part of History Channel’s Vikings where she plays Helga, “the tenacious wife of the troubled and mischievous Floki”, portrayed by Gustaf Sgarsgard. 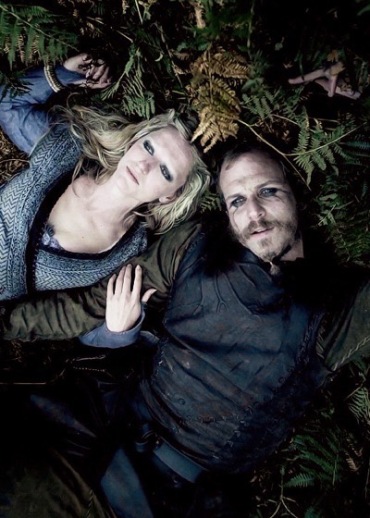 Maude as Helga in Vikings

When talking to Maude, I immediately sensed that the 23-year-old actress is not merely a pretty face, but also a humble, articulate, talented lady and a force to be reckoned with in the near future. Her father Michael Hirst is a well-established writer/producer; one might think that she has probably gone into acting because of her father, but that is where you would be wrong. Maude herself stated: “I was always creative, I didn’t grow up much with my father. I was raised by my mum who is an artist and that’s what probably influenced my creativity.”

“I didn’t know I would go into acting until when I was 10 years of age. I used to be in gymnastics, just as a hobby. One day, a casting director, who was making a film about gymnasts, spotted me. She really got me interested in the film industry really, and when I was old enough, I decided to make my own decision, to go into acting and train properly.”

After getting a scholarship to the prestigious London’s Italia Conti of Academy of Theatre Arts and graduating the school, Maude went on to play Kat Ashley in The Tudors; being a part of a great assemble of actors has definitely increased her confidence as an emerging actress: “It was brilliant, it was just after the drama school and I was completely new, wide-eyed to the whole film world. Being in a such a huge show as The Tudors is quite overwhelming when you are young actress, but it also makes you learn fast.”

“It was a huge learning curve for me for sure, but it was also very exciting.”

Maude Hirst has been starring in Vikings, an original Canadian-Irish series, for the past four years and, as previously mentioned, she portrays Helga in the series. How much of her own character did she put into Helga’s? Has she perhaps wanted to separate herself from the character?

“I think it’s a bit of both. There are similarities between me and Helga, but there are many differences too. Nevertheless, when I started, I really tried to make her have her own character and keep her away from myself; but after four years developing the character – and throughout the show – I think I’ve become very empathetic towards Helga. But I would like to think that I am slightly bossier than her. All in all, we are the same – yet different.”

After four years of playing Floki’s wife, I am sure there must have been moments when Maude thought that it was a challenge to play Helga … “Yes, absolutely. I found it challenging at times, particularly when she had to go through a trauma of losing a child, and also dealing with Floki’s mental health issues. Both were huge subject matters and I really wanted to do them justice, as it wasn’t easy to tackle such topics.”

According to Maude, Helga’s relationship with Floki – not to give away too much – is still going strong in Season 4; there will be a few challenges along the way, but as she said, “they have a special bond, and that will continue in the next season, as far as I can say (laughs)”.

In Vikings, there are various female characters with different issues. Some of them are vulnerable, while some are really tough. To me, Helga has always been a strong individual,  and to Maude … “I think she is becoming stronger. I think she came to the show as a carefree, always hippie Viking. And with all that she has been through, I see her as a hugely brave woman. Even though she is not a fighter or a warrior – like some of the other characters – I think her strength lies inside of her; her internal strength is admirable.”

Maude recently starred in The Knock, a short film which is currently in post-production and might even be eligible for a BAFTA nomination. The film deals with a young child’s loss of innocence: “It is a beautiful story, and the cast was also great. I hope people can see it soon and enjoy it.”

With a packed schedule, Maude still managed to find the time to found Tuppence Films, which specialises in producing work with female leads including the 2013 feature film Smoke. It is great to see that more female filmmakers and actresses are trying to push through into the film industry that is – sadly – still dominated by men. What ought to change to improve the women’s role in the industry? “My opinion is that it is still very much a subject matter that needs to be discussed and it needs to be changed because it is very apparent that it is women – not only in the film industry, but in any other industry, that are treated unfairly; for instance the pay gap is still huge, also there is a lack of leading ladies in films. Yes, everyone talks about it, and the situation slowly changes; however, I think we still have a long way to go.”

The situation in the TV and film industry regarding the power of men over women actors is appalling. Discussing the recent situation that highlighted the unpleasant filming that Maria Schneider endured during Bernardo Bertolucci’s Last Tango made me realised that, after 40 years, not much has changed. We don’t really know why this is still happening, but the good thing is that film professionals have started talking about the role of women in film and about equality and how we could change/improve the situation. Maude said that there is a long way to go, but, with time, I am convinced women will take over film industry as there are many bad-ass female film directors (Andrea Arnold, Kathryne Bigelow, Jane Campion, Mira Nair and many more) and actresses out there, proving that “we’re worth it.”

Maude also writes in her spare time; perhaps in a few years’ time, we will see her behind the camera; that said, she is currently concentrated on acting. We do hope to see her in yet another exciting TV show or maybe in a feature film in 2017. But, for now, we wish her all the best and we look forward to seeing her in the second half of Season 4 of Vikings. Thrilling times!

Featured image © Courtesy of the photographer

All photos © Courtesy of the photographer