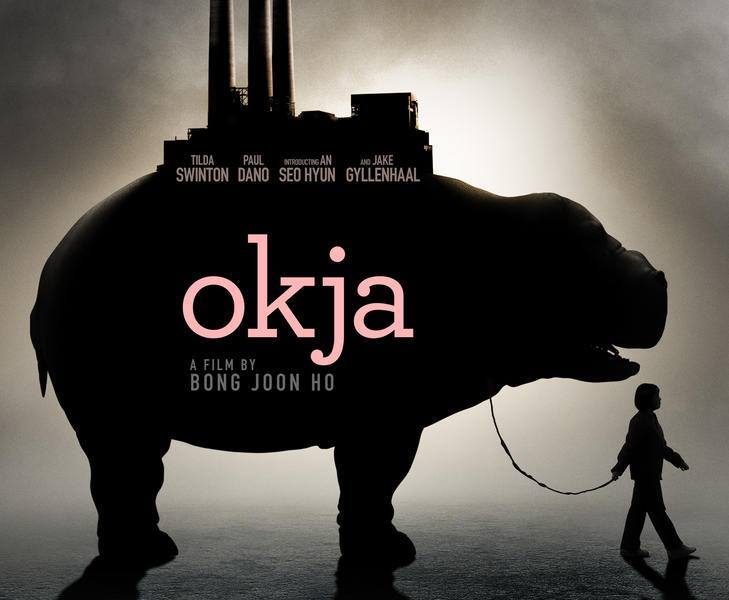 There is no doubt that Bong Joon-ho is a visionary filmmaker. And with six features under his belt (Snowpiercer, Mother, The Host, Memory of Murder, Barking Dogs Never Bite), including his newest production, the Netflix original Okja, there is no sign of him slowing down. Okja premiered at this year’s Cannes Film Festival; it connects drama, family cinema and humour and while watching it, the audience may both sob and laugh.

For a few years, Miji (Ahn Seo-hyun: The Housemaid, Monster) has lived a peaceful life with her grandfather in the mountains of South Korea; it is a place that also becomes a sanctuary for an unusual animal named Okja, the girl’s friend and companion. The idyllic existence suddenly ends when the giant hippo-looking-pig (it can certainly swing its hips) – without Miji’s knowledge – is returned to its rightful owner, a New York-based Mirando Corporation. Okja is transported to the city, where the greedy and self-image obsessed president of the company, Lucy Mirando (Tilda Swinton: War Machine, Doctor Strange, Snowpiercer), wants to show off her creation to the public, concurrently organising mass slaughter of similar creatures to sell their meat. Without hesitation, Miji goes on a quest to save her beloved friend; in the meantime, Okja also becomes a subject of interest to a rather unusual animal rights’ group, run by Jay (Paul Dano: Swiss Army Man, 12 Years a Slave, Prisoners). 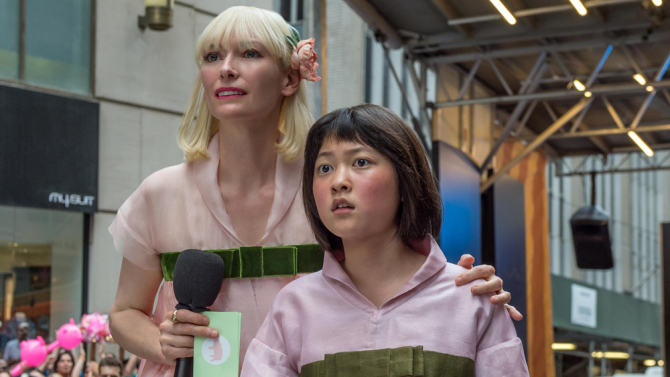 In Bong Joon-ho’s film, there is no artifice. All of the characters – although some are terribly overdone, like the mentally unstable and occasionally goofy Dr. Johnny Wilcox, portrayed by Jake Gyllenhaal; he strongly reminded me of Julius Henry Marx, an American writer, comedian, film and television star (famous for Brother Marxs’ shows); or the weird and quiet Jay, characterised by Paul Dano – fit into the narrative naturally. The director drew on the incredible acting talents such as Tilda Swinton, with whom he previously worked on Snowpiercer. Ahn Seo-hyun is the star of the film! Seo-hyun projects the feelings of happiness, sadness and irritation to the audience implacably – whatever Miji feels, the viewers will feel. Minji’s struggles with various adversities in order to get Okja back may also cause a few tears here or there.

I feel like Bong Joon-ho got slightly lost in balancing the narrative between corporate greed, the negative sides of capitalism and between drawing a family portrait, including the friendship between Miji and the animal. That said, the subtle relationship between the two is wonderfully built on the powerful emotion that is love.

Now, onto the music; sadly, it was the most random score I have heard in a long time, most of the songs or musical tracks weren’t adequate for the actions on the screen. On the other hand, the sublime cinematography by Darius Khondji (The Lost City of Z) beautifully blended with – not as much credible – CGI piggy. Due to the limited screen time, supporting actors like Lily Collins, Steven Yeun, Devon Bostick and Daniel Henshall didn’t manage to show off their acting talents, and from what I have seen, their performances were somewhat okay.

Okja tackles an up-to-date theme of consumer awareness, and at the same time it raises a few questions: do we all know where the meat comes from, how the animals are treated and under what conditions they are kept? The audience ought to be aware that Bong Joon-ho didn’t make a movie to make us think that we should all become vegetarians; the film’s purpose is not to make us abandon our eating habits – Miji eats meat herself (rabbit) – but to make us realize that animals, particularly those intended for slaughter, are not always treated the way they should be treated – with dignity.

All in all, with a few questionable moments in the film, Bong Joon-ho’s new work is a nicely woven production about an unusual friendship and an allegory of a society of both caring and hypocritical carnivores. It might actually make you look differently at the pre-packed meat in stores.

After watching a couple of big Netflix productions, I wonder if the company is going to make more high-budget films. I am not surprised that with such a huge video-on-demand network, the cinema feels threatened, especially since Netflix currently does not desire to screen its films in worldwide cinemas, save for a handful of limited screenings, probably thinking that more people will be motivated to subscribe to its network – cheeky!

All photos © Plan B Entertainment & Netflix