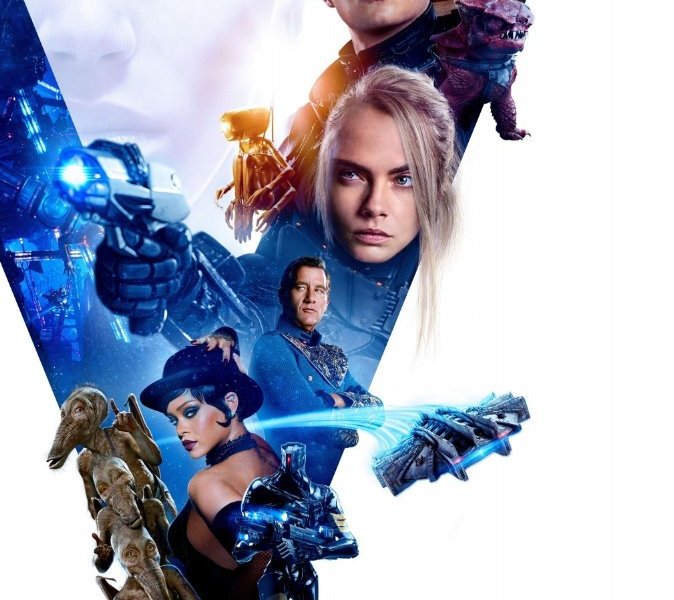 Luc Besson’s Valerian And The City Of A Thousand Planets

The Fifth Element (1997) has been both loved and bashed by critics for the past 20 years; some have even ruled it the best summer blockbuster ever made. However, not many people know that Luc Besson’s creation was partially inspired by a series of French space opera comic books called Valérian and Laureline; the connection between the comics and the movie was visually furthered by the fact that Besson employed none other than Jean-Claude Mézières, the illustrator of the comics, to be in charge of the production design for The Fifth Element. Decades later, Luc Besson finally achieved what Mézières suggested already in the 1990’s: he adapted the 6th volume of the comic book series, ‘Ambassador of the Shadows’, into what aspired to be yet another summer blockbuster: Valerian And The City Of A Thousand Planets. Funnily enough, due to its compelling, but oddly familiar visuals and the strong (and also oddly familiar) moralizing speeches that bring back all those 1990’s feels, it feels more like a sequel to The Fifth Element than a start of a new comic-book-based space opera.

Through a series of fast-forwarded time jumps, we witness the growth of Alpha, first a simple space station above Earth and then a steadily growing incubator that brings together beings and creatures from all sorts of planets and galaxies – on Alpha, they live together peacefully while exchanging their knowledge. From the man-made planet-like station, we jump to an idyllic planet of humanoids that live in symbiosis with nature – until a giant spaceship falls from the sky, destroying the only world that they’ve ever known. In a flash of blue, on the other side of the galaxy and time, Valerian, a special agent of the human security force, wakes up to receive a mission with his partner and love interest, Laureline, to retrieve the last living member of an animal species from a black market dealer on a nearby planet. After an eventful mission, the pair returns to Alpha only to learn that the animal seems to be somehow connected to the mysterious force that has infected a part of the station. Valerian and Laureline are put on the security detail of protecting both the commander who is at the station to address the security council, and the animal – but the aura of bad is strong around the commander and things seem to be fishy even before the meeting gets attacked by technologically advanced humanoids. The commander is kidnapped and Valerian goes missing during the pursuit – and we’re only approximately at the half of the story!

Boring is certainly not a word that one could use to describe Valerian And The City Of A Thousand Planets. First of all, Besson is a master of visual antics, and knows how to really bring a film alive on the visual scale – which might just be the (only) saving grace of this film. It is palpable that he really let go and had all the fun he could muster with the digital technology that he could only have wished for when he was making The Fifth Element. The action is also very packed and fast paced – but this does not manage to fill in the numerous gaping holes of the narrative, and it also cannot take away the fact that certain members of the cast – especially the lead pair – were grievously miscast.

Dane DeHaan is a fine actor, but he might just have had a bit too much depth to really get into the playboy, playful character of Valerian. On the other hand, Cara Delevingne fell completely flat with what should have been a complex, but compelling character of Laureline. In The Fifth Element, however overly dramatic and over-the-top the acting was, the chemistry between Bruce Willis and Milla Jovovich literally sizzled on the screen. It regrettably feels like DeHaan and Delevingne are smack on the opposite side of the scale. The chemistry between the two feels virtually non-existent, if not even in the negative. As for the rest of the cast… Rihanna made a notable appearance, but (spoilers ahead) for a character that got disposed of fast, in a very negligent, almost thoughtless, oh-by-the-way manner. Clive Owen’s commander was the painfully obvious (in terms of both the story and acting) villain of the story, Kris Wu did good in his (however brief) role, proving that his English is more than adequate for further Western castings, and Ethan Hawke and Rutger Hauer… well, they appeared.

The bottom line for this film is: bad casting, a great score (Alexandre Desplat did another awesome job), a visual feast with an Emmenthal narrative (cheesy, uberly moralizing, with plenty of holes), but still oddly fun to watch. I dare say that I might be even tempted to watch the (probable) sequel!