Seeing Him: Short Film Review Plus Q&A with Vanessa Bailey

The theme of attraction and fantasy relationships where a woman is older than a man is clearly deficient in the cinema, while the reverse configuration finds plenty attention without anyone complaining.

Seeing Him, a short film written by Vanessa Bailey and directed by Chris Jones, has finally brought what the British cinema was slightly lacking: a topic of profound love between a mature woman and a younger man. Sophie (Vanessa Bailey: EastEnders, Doctors, Casualty) and James (George Taylor: Sherlock Holmes: Game of Shadows, Partners in Crime), against all odds and the efforts of Sophie’s (Catherine Rowney: Doctors) sister – who tries to set her up with a silver fox Mark (Duncan Duff: A Quiet Passion, The Tudors) – form a strong liaison. They cherish each other and, like any other ordinary couple, they enjoy spending time together – the filmmaker in a subtle way shows that love knows no age, and that we ourselves have a right to choose the one we love.

Seeing Him (without giving away too much) is also a story of a struggle and of arduous decision-making. Even without a detailed description of the main characters, the audience learns enough about Sophie’ and James’ resilience towards those who oppose their love affair. Nevertheless, is it right for them to be together? Will their relationship stand the test of time?

Seeing Him is just 7 minutes long; however, it is a beautifully woven short film which might also make you cry. It is not one of those forged Hollywood narratives; Seeing Him is an honest tale, a tale that some of us might relate to; perhaps not to the full extent, but at least somewhat. The film is accompanied by William Goodchild’s (Jago A Life Underwater, Gorilla Family and Me, Walking Through History) superb music that adds a great note to the short.

Technically speaking, Seeing Him is exceptionally well done; you can see that it is polished from A to Z, with no cut corners. Cinematography by Don McVey (The First Film, Comes A Bright Day, Postcards from the 48%) and James Layton (Downton Abbey, Fortitude, Sherlock, Humans) is flawless, as well as editing by Christopher Frith (Mission: Impossible – Rogue Nation, Rogue One, Kingsman: The Golden Circle, The Man From Outer Space). All in all, Seeing Him is an exceptional and haunting short, worth watching on the big screen.

It took a very long journey for you to make the short film ‘Seeing Him’ (Previously called ‘Three Days’) – the last time we spoke about the film was back in February 2013. Could you tell us more about the process of making the short and the story behind the hard work and the delay?

Yes, it did take a while to get the film to the point where I was happy to see it go up on the big screen. And that was a combination of production glitches and challenges and my decision to only make something that I considered the very best film I could make with the resources we had. The film was crowdfunded (via five separate campaigns) so that certainly helps to keep you accountable for the way you use other people’s money.

The film started as Three Days, a romantic comedy, but after the first shoot, it became apparent that we couldn’t cut the film from the footage we had. Too much had been both spontaneously tweaked on the day without enough consultation with myself as the writer, and this led to serious continuity/story arc issues. We had also missed certain moments in the script. I had a choice to make – either try to make a very pretty but disjointed set of scenes work somehow or start again from scratch. Having spent time going through all the footage at Ealing Studios and after discussing the production issues independently with Chris Jones I decided to take the plunge, with Chris’s encouragement, and re-write and re-shoot.

I have to say that the story behind ‘Seeing Him’ captured my interest immediately. What prompted you to change the previous short story of ‘Three Days’ into a completely new narrative in ‘Seeing Him’?

I could have gone back and re-written the same story again, but I felt that there was a better story out there. I knew that my backers trusted me to make the best film I could, so I decided to make the shift to drama, but still keeping the central age gap romance. This was a good point at which to look at re-casting and crewing. I spent some time with Chris Jones and Judy Goldberg chewing over ideas for the story and how to give it some punch. In fact, I did know what I needed to do to give the film its pivotal moment, but I was reluctant to go down that particular line. When Chris suggested the exact same idea, I did fight it for a while, but eventually conceded that if I could write it well enough; it was exactly what the story needed. Then I went away and started writing the new script, sending drafts to Judy who would look them over and give me a few pointers here and there if there was a gap somewhere. Or if a scene wasn’t working effectively.

The main challenge with this particular set-up is to make sure each scene is driving the narrative forward in some way. And to make sure the audience have shortcuts to help them care about the characters as quickly as possible. There is a lot of narrative in under nine minutes, so the challenge was real! I fell head-over-heels in love with the new story and the new James; that made the whole process very exciting. I very much wanted to be able to provide the means for the characters and their story to come alive on-screen. 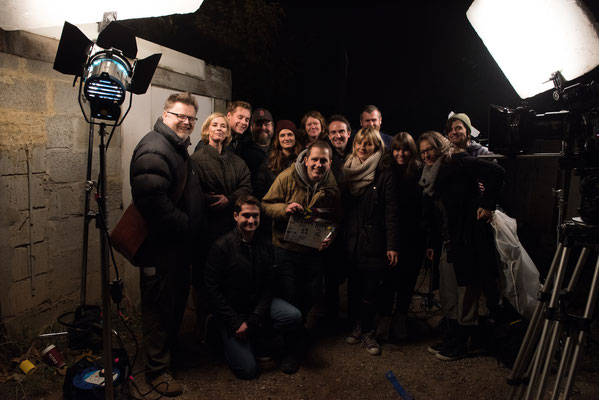 4 years ago, you had a different cast assigned to the project; you later decided to work with a new cast for ‘Seeing Him’, including a new leading male role. Can you tell us a bit about the actors?

It was a fantastic opportunity to go back to the drawing board and to make sure I had exactly the right actors on board for this new version of the story. Catherine Rowney stayed on board from the previous incarnation and I wrote a new role for her, the part of Kate. That was easy as I knew Cat well as an actress and friend and she fitted the role of Kate perfectly.

It was very difficult to find the right actor to play James. I watched dozens and dozens of showreels, stalked people on social media and just couldn’t find the right fit. Then I stumbled across George Taylor by complete accident on a friend’s website. My friend, Seb Solberg, has been shooting some BTS interviews for a big indie feature film and I happened to watch George being interviewed talking about his role and the film. I felt an immediate connection with him as an actor and as a person and was absolutely convinced I’d found James. I tracked him down on Twitter (bypassing his very big agent), we had a phonecall, then a coffee. It was clear even from the coffee that there was chemistry between us so then I sent him the rough script and he said yes to the part. I continued to re-draft and hone the script once I’d met him, to suit his skills and nuances as an actor. I threw him some awful things like deliberately over-written dialogue and even a monologue, because I knew he could handle them.

I met Duncan Duff at a job we were both doing for the BFI and Channel 4. We were playing husband and wife and got on really well. At that point in time, I had a scene at the beginning of the film that I felt wasn’t working well and then when I met Duncan, I immediately saw the solution to my problem – a new character with a very specific role in the story. And so, without actually having the role written yet, I asked Duncan if he would be interested in looking at the script for my film. He said yes, I went home and re-wrote the opening scene with Sophie and the new character of Mark, sent it to Duncan and he accepted the role. 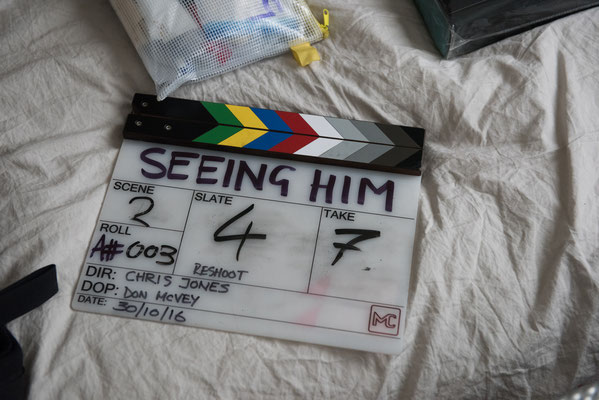 You did 5 crowdfunding campaigns; do you think that crowdfunding is the future for independent films? If yes, why is that?

Crowdfunding does several things – it democratises the process so you no longer have to wait for permission or funding to make a film. It offers free, global promotion for your film and helps build a fan base for yourself and your projects. And it offers other people the chance to share in the process of filmmaking and to really feel a part of the final film.

Done well, it’s also EXTREMELY hard work. It takes planning, marketing and a knack with social media. But for the filmmaker who is prepared to work hard, think outside the box, develop marketing and networking skills and take a collaborative approach to filmmaking, it is massively empowering and makes filmmaking possible in an otherwise fairly impenetrable industry.

After all the ups and downs, you successfully made your short, which has now been sent to various prestigious international short film festivals. ‘Seeing Him’ was also nominated for a few awards; how does it feel to be nominated after all the hardship?

I am so proud of my amazing team and what they’ve helped me achieve. I came into this with no experience of writing, producing or filmmaking. I have learnt so much from every member of my team about so many aspects of filmmaking. My director Chris is a multi award-winning director, my DP James has worked on Downton Abbey, Humans and and Fortitude, my composer William has scored for the BBC and National Geographic and our editor Chris has worked on Kingsman and Mission Impossible. They have raised the production value of the film and taught me so much. I, in turn, have been determined to see the film through to completion in its best form. We are pretty excited to have been selected to screen at the Opening Gala for Oscar-qualifying festival Rhode Island and have been nominated for three awards (Best UK Short, Best UK Director and Best UK Actress) at New Renaissance Film Festival. We’ve also just been selected by Leigh Film Festival and have many more festival submissions still to hear from in the coming months.

All the toil and struggle (and there have been some significant personal struggles along the way too, including unexpectedly losing both of my incredible parents in the midst of production), the not-giving-in to compromise has been worth it to see that audiences are engaging with the film and being moved by it. And I really hope that film festivals will give the film the exposure my team deserves.

So yes, it feels amazing to finally have the film finished and to be getting the story of James and Sophie out to a wider audience. We did it!