Guillermo del Toro (Pan’s Labyrinth, Crimson Peak, Pacific Rim) is an intriguing, imaginative and fearless filmmaker, whose dedication to his work and signature film technique made him into one of the most recognisable contemporary film directors. What makes his work even more alluring is the fact that he is very precise when it comes to “his” creatures, from their make-up to their costumes; he often tries to avoid using too much CGI as he desires for the ‘monsters’ to be as authentic as possible.  Guillermo del Toro’s unfettered imagination always takes an audience on an unforgettable journey as he successfully manages to create narratives that blend fantasy, adventure, and horror. 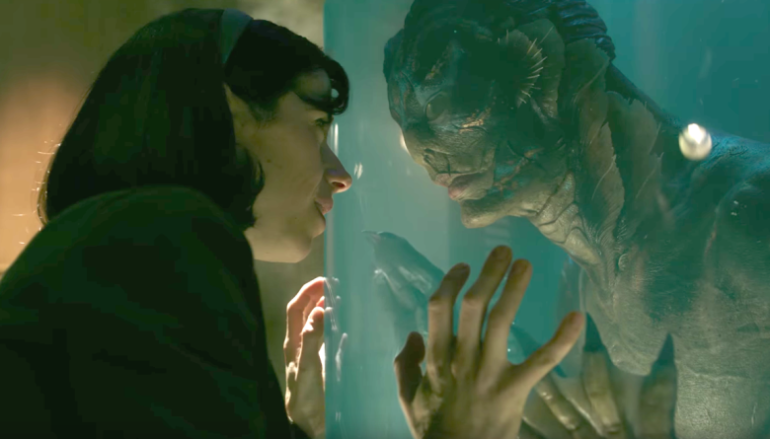 His newest work, The Shape of Water, is a breathtaking and enchanting adult ‘fairy-tale’ about the love between a mute janitor Elisa Esposito (Sally Hawkins: The Double, Blue Jasmine) and an amphibian-man (Doug Jones: Pan’t Labyrinth, Hellboy), set against the Cold War in 1960s America.

The film opens with a scene that takes the viewer into a fantasy realm: an apartment, filled with fascinating fabrics and objects, ‘descends’ into the water; everything swirls and floats around, including a young woman who is blissfully asleep. Suddenly, we are ‘woken up’ by the sound of an alarm clock, the scenery changes and the flat seems to be completely normal again. This is when we meet Elisa who daily, with great enthusiasm and meticulousness, prepares her meals, then visits Giles (a great performance by Richard Jenkins: The Visitor, Six Feet Under) – a painter and a lonely neighbour of hers; she sleeps during the day and works at night as a cleaner in a facility owned by the U.S Government. There is something enigmatic about Elisa (e.g. there are cuts on her neck that go unexplained), but it is clear that she is good-hearted, stupidly brave and charming, all at the same time; since she is known for never asking questions, she is sent – with another cleaner, Zelda (Octavia Spencer: Hidden Figures) – to clean a secret laboratory. There, she encounters a very peculiar “classified experiment”, a.k.a “The Asset”, who is often mistreated by Elisa’s superior, Colonel Richard Strickland (Michael Shannon: Revolutionary Road, The Iceman), and the creature quickly becomes the woman’s soulmate. 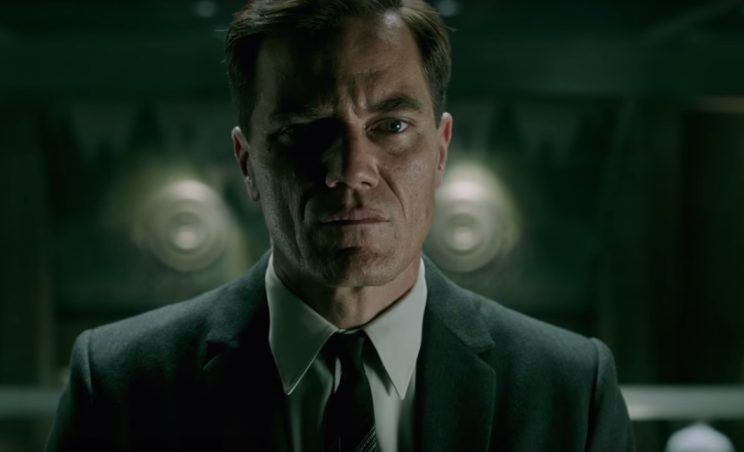 Parallel to the two individuals’ story, the film director cleverly ‘hides’ the political matters – USA is showed as a super power, ‘playing’ against The Soviet Union – as well as social issues that were present at the time (and are still present today): racism, homophobia and rejection of those that are less fortunate. Elisa and the amphibian-man match together, even as – according to some – they do not fit the standards of the surrounding world. With this film, Del Toro points out that being different is acceptable even as there is a need to redefine the entire concept of the word ‘different’.

The film consists of all the things you would expect from the renowned Guillermo del Toro: unrestrained imagination, a perceptible clash of good and evil, darkness and mesmerising assemble of actors. The British actress Sally Hawkins’ characterisation of Elisa is sublime, without any words spoken; just by using sign language, she dominates  the big screen. Elisa is the ultimate heroine in The Shape of Water, unafraid to stand against the devilish Colonel Richard Strickland – played by Michael Shannon, who also delivers exceptionally well. Doug Jones as The Asset is irresistible in his own way; there is so much grace to his character, he definitely cannot go unnoticed; every single thing about this film is outstanding. The Shape of Water is an exquisite cinematic experience that cannot be missed!