In Conversation with the Oscar Nominee Nora Twomey, Director of ‘The Breadwinner’

Nora Twomey, an Irish animator and filmmaker, studied animation at Ballyfermot College in Dublin. In 1999, she co-founded – alongside Paul Young and Tomm Moore – Cartoon Saloon. Her journey into filmmaking started in 2002, when she directed From Darkness, an award-winning animated short. With Tomm Moore, she co-directed the beautiful animated feature film The Secret of Kells, which premiered at Berlinale in 2009 and was nominated for Best Animated Feature Film at the 82nd Academy Awards.

In 2017, Nora Twomey directed The Breadwinner, a profound and visually impressive animated feature. The story of the film focuses on a young Afghan girl Parvana and her extraordinary journey – after her father is arrested, she disguises herself as a boy to be able to take up a job and make money for her family. The animation won a few awards already and has several pending nominations, including the nomination for Best Animated Feature at this year’s Oscars.

Just a few days ago, we were honoured and delighted to interview Nora Twomey herself.

The Breadwinner is based on the best-selling children’s novel of the same title, written by Canadian author Deborah Ellis. What made you decide to get on board and direct the film? What’s the story behind it?

The book landed in my lap and I absolutely loved the character of Parvana. The way Deborah Ellis writes for young people, that doesn’t talk down to them or belittle their intelligence was really refreshing. Anthony Leo and Andrew Rosen of Aircraft Pictures, a Canadian production company, got in touch with Gerry Sherrin and Paul Young of Cartoon Saloon back in 2013. They had the rights to Deborah’s book and had seen The Secret of Kells an film I co-directed with Tomm Moore. Deborah’s book was published in 2000, given everything that had happened since in Afghanistan and around the world, I felt a film of this nature was something not just I, but many animators, voice actors, musicians and painters would be interested in creating. I think the time for a nuanced, hopeful film tackling what life is like for children like Parvana was at hand.

Could you tell us more about the process of making The Breadwinner? Who was responsible for the storyboard and the animation itself?

There are over 300 creatives involved in this film. It is a co-production between Ireland, Canada and Luxembourg featuring the voices of a diverse cast including many Afghan actors and the voices of The Nahid Women Choir of the Afghanistan National Institute of Music in the score for the film. The cast includes actors who’s family fled conflict in Afghanistan over the decades, as well as many people who’s own stories inform the depth of understanding in the film. Ciaran Duffy and Reza Raihi worked together as Art Directors for the film, their own skills and talent informing the look of the film. Jeremy Purcell directed the sequences where we see Parvana’s imagination. Anita Doran, our screenwriter worked closely with Amanullah Mojadidi, an Afghan-American artist to make the screenplay as nuanced and sensitive as possible. The animation was done in Cartoon Saloon and Studio 352 in Luxembourg, with the compositing being led by Sanatan Suryavanshi and Sheldon Lisoy of Guru Studio in Toronto. Over the years many people contributed to the film and it has been an honour to lead the team.

The film is a great eye-opener for the situation that has been present in Afghanistan for decades, if not more – the mistreatment of women and girls goes beyond anyone’s comprehension. What message, as a director, did you want to get across to the audience?

I did not set out to make a message – rather a film; a story about one young girl and her love for her family. While making the film, it brought home to me how anywhere you have conflict, men, women and children continue to suffer for generations. The reasons for conflict in Afghanistan are complicated and multifaceted. Proxy wars, fought by the world’s superpowers, have a direct impact on families and oftentimes the true effects of seemingly well-meaning intervention can only be seen in hindsight. In a world where so many children do not have access to education or are forced to take on the responsibilities of an adult because of lack of resources, there are no easy answers or simple messages, there is only the simple fact that every child born into this world deserves an education, a roof over their head and to have their family around them.

The Breadwinner is a very moving and visually impressive film. Were you fully responsible for the animation? How did your work with script writers Deborah Ellis and Anita Doron look like throughout the process of making the animation? How involved were they during the production?

Deborah is an incredible novelist, activist, educator and feminist. She is someone I look up to a lot and I really tried to honour the spirit of what she’d achieved in her novel. Deborah had written a draft of the screenplay back when it was being thought of as a live-action film and Anita and I mined that draft for anything we could use in the animated version. Anita did an incredible job with the screenplay and is a very visual writer. Her dialog is like poetry but it’s also full of character, so it made the story-boarding stage easier. Julien Regnard, a director who had made a short film called Somewhere Down the Line and with whom I had also worked on Song of the Sea with, story-boarded an entire rough pass of the film with me. I wanted to keep the initial team quite small as the amount of research and the sensibility of the film had to be spot-on. Once we had that first pass of storyboard, other story artists came on and we had a very solid story foundation. Stuart Shankly was my amazing Assistant Director while Ciaran and Reza made sure the look of the film always gave Parvana what she needed to carry the story.

What was your vision of Kabul before making the animation? Was it very complex for you to depict the city and its inhabitants?

The film is set at a time when 80% of the city had been destroyed by decades of war. Camera’s and recording equipment were prohibited in the city. There are famous images superstitiously taken, where we see VHS tapes and TVs tapes strung up on electricity poles as warnings to those who might attempt to document the regime. So many Afghan voices inform the look of the film, it’s atmosphere and the characters we see, the beauty of animation is that it takes so much time to complete, so you have a lot of time to think, to ask opinions, to inform and add depth.

This is one of those questions that probably everyone asks. How did Angelina Jolie get involved in the project?

Our executive producers Jon Levin, Jehane Noujame and Karim Amir managed to get the screenplay in front of Angelina. Jehane and Karim had produced and directed The Square, a documentary about the uprising in Egypt and were working with her on some other projects.  Angelina came on at an early stage in production, she read the material and understood our approach to the subject matter. She set up a girl’s school outside Kabul over a decade ago and continues to support young girls like Parvana in Afghanistan and around the world, so her guidance was really important to the team.

The film may not have earned millions of dollars, but it stole the hearts of many people, including those of the Academy Awards’ jury. How does it feel for you to be recognized as a film director and to show such an important and relevant film to the world?

I think it’s really difficult for independent films, especially animated ones, to compete theatrically without a publicity budget many times greater than the production budget. Therefore recognition by critics and awards bodies means the film won’t disappear but may be discovered by the general public in more round-about ways. The whole team has been overwhelmed by the stream of nominations the film has received.

When I saw the film at the last year’s London Film Festival, I felt really emotional by the end of the film. Why – in your opinion – is this film appropriate also for the young audience, for kids of age 11 and above?

We aimed the film at the same audience as the book, around 11 years up, but I continue to be surprised by the reaction of young adults and older adults. Children seem to take their cues from Parvana and how she deals with the world around her, whereas adults have a huge context within which they place the story and characters, oftentimes they are reacting to their expectations more than the film in front of them. Really though, the film is no longer mine and belongs to the audience, so at the end of the day, it is whatever they make of it. 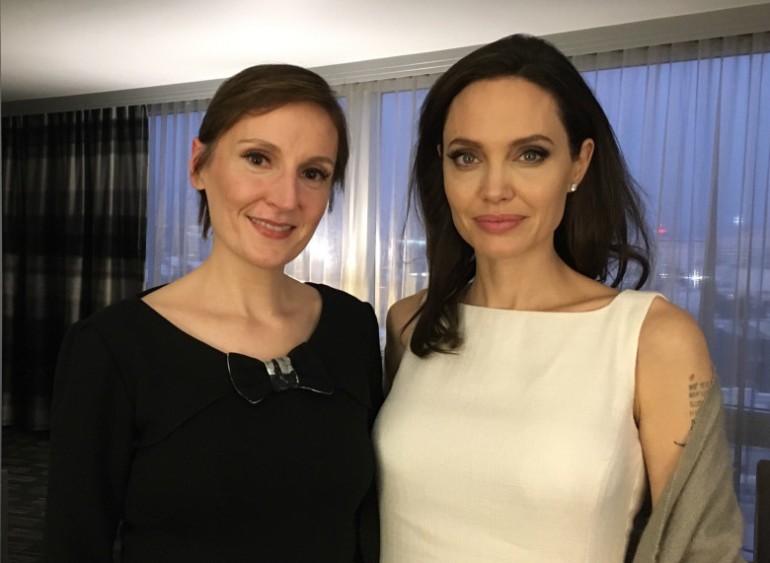 It seems like The Breadwinner might have started a new trend of making more serious animation, animation that is relevant to the current political situations around the globe. What are your thoughts on that?

Grave of the Fireflies, Persepolis, Waltz with Bashir, When the Wind Blows, Ghost in the Shell, Akira etc. There have been many films that use animation to explore complex, mature ideas. There is no rule that states that animation has to be used to make comedy films for very young audiences, yet it is an unspoken expectation in the West. Films like The Breadwinner challenge that and I have a lot of hope, given the range of films available on our screens nowadays, that the horizon will broaden for animation.

So how’s the animation business doing in Ireland?

It’s booming. In Kilkenny, where Cartoon Saloon & Lighthouse Studios is based, we have over 120 people employed. In Dublin, there is a huge number of companies creating original content and working with Disney, Amazon, Nickelodeon, Netflix etc. It’s amazing to witness how strong the industry is here, how much talent we have in the country. The support of the Irish Film Board, The Broadcasting Commission and Section 481 tax incentive, along with long-term support of organizations like Enterprise Ireland and the IDA, have meant the country is now reaping the benefits of such a value being placed on the creative industries in Ireland.

What’s next for you in the pipeline?

For Cartoon Saloon, Tomm Moore’s Wolfwalkers is next in the pipeline. Along with a number of animated series in development, I’m working on a new feature at the moment but it’s early days.

All other photos courtesy of the photographer.

Film, Film events and festivals, General, In Conversation with