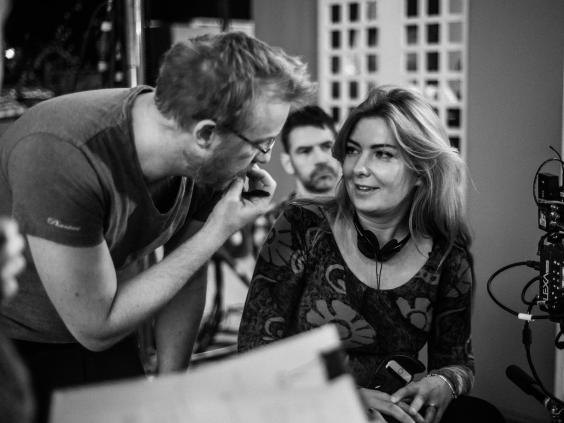 In Conversation with the Oscar Nominee Dorota Kobiela, Director of ‘Loving Vincent’

How much passion does it take for a person to take on a task of making a movie such as Loving Vincent? Probably a lot, since it took almost a decade to bring the sublime production – the world’s first full-length painted animation, consisting of about 65,000 paintings, painted with oil paint on canvas – to life. But with plenty of passion, Dorota Kobiela and Hugh Welchman, with their extraordinary team of artists, managed to create the exclusive and visually immersive film about Vincent van Gogh.

Dorota Kobiela was awarded the Ministry of Culture scholarship for special achievements in painting and graphics for four consecutive years. Through friends, Dorota discovered animation and film, and immediately threw herself into learning these new artistic disciplines, attending the  Direction Faculty of the Warsaw Film School. (source Loving Vincent).

We caught up with Dorota a few days ago and chatted about filmmaking and her work on Loving Vincent.

Looking at your entire project, the audience might wonder what was in your artistic head to take on such an enormous task that it was to make Loving Vincent. Could you tell us how it all started?

I honestly had no idea what I was about to take on my shoulders (laughs). Years ago, I was working in Lodz, and the concept of creating the film about one of the greatest painters of our time came into my mind. I think it was about 10 years ago, and the production itself started in 2011 or so, but at that time, I was only thinking of it as a short film.

When in Lodz, I was helping my friend with his project; I quickly realized that I am a painter, but I was working on film animation; painting what I was missing the most. So I thought to myself, how can I combine my passion with filmmaking? How can I put oil paintings into filmmaking? How can I incorporate both on the big screen and show it to the audience? I had all of those questions going through my mind… and then I thought of Vincent van Gogh. I was fascinated by his persona, by the letters that he wrote to the people he cared about, and by how all subjects of his art were real. I realized that you can tell his life story through his incredible paintings. So that’s how it all started.

You are a painter by profession; I imagine that directing this film must have been very stressful. How did the filming process look like on the set itself?

It was stressful. The whole learning process was difficult, but having said that, I learned a lot from my friends’ projects, The Letter (2004), Love me (2004), Mr.Bear (2005), Chopin’s Drawings (2011) and Little Postman (2011), all of which are short animations. And working with people on their projects was an interesting experience in itself; you kind of learned how to do everything by yourself, from script-writing to even producing your own work, you had to do work on the sound design, music and post-production. I think I was really lucky to work with my friends as I learned how most of the things work. Everything that I have learned, I transferred into my personal journey of making Loving Vincent. But obviously, it wasn’t possible for me to make a feature film on my own (laughs). I met Hugh and… Work on set was hard, but it was also great in many ways.

In many newspapers around the world, and on many global websites, there are so many fantastic reviews of Loving Vincent; critics have expressed their opinions objectively with 4- and 5-star reviews. That said, I would love to know your opinion about the film and if you are fully satisfied with the final product?

I worked very hard on Loving Vincent and while making the film, I was thinking and concentrating on how to make it well, you know, how to make it the best I can. The film’s triumph took me totally by surprise! After all that hard and complex work, we received so much love from around the globe; it feels surreal to me. The whole project was a project of passion, and our team of artists, actors and the entire crew, we all believed in the film, so I am delighted that Loving Vincent has become so successful. I think I was the most terrified of the first screening of the film. After we finished with the production and post-production, we had to wait for about 3 months before we screened Loving Vincent for the first time. That period of time was very nerve-wracking, but afterwards it all went well, we received a standing ovation; what a relief that was (laughs).

Looking at the script, one might wonder why there are two narratives in the film. One that depicts Vincent van Gogh himself and the other one telling the story of Arman Roulin, a young man portrayed by Douglas Booth. Both narratives are shown in different types of animation. One is made in van Gogh’s style and the other one is black-and-white. Was it your purpose from the beginning to have dual narratives and two different animations?

Yes. There are so many different stories about Vincent van Gogh out there, we wanted to show as much as possible. We read the painter’s letters, his touching words to those who he cared about the most. We didn’t want to invent anything about the artist, we were eager to keep everything within the bounds of what we found about him. And having two narratives was intentional as well. It made the film more interesting and the two different animations allowed the audience to take a break from the colorful and bright screen – it made for a good eye-rest.

What was the casting process like for Loving Vincent. Robert Gulaczyk was the perfect choice, but how was the rest of the casting? How did you choose Douglas Booth, Jeremy Flynn, Saoirse Ronan and Helen McCrory?

We were very lucky to be working with Trademark Film, a British production company that won the Academy Award for Best Picture in 1998 for Shakespeare in Love. I met Saoirse a few years before the project started, and I was very eager for her to be a part of the film. I think it is also a combination of luck and good work of the casting director. We were also very fortunate as the actors we got were interested in taking a part in the making of Loving Vincent.

You also worked with Clint Mansell on the film; he is known for being an incredible film composer. How did you manage to get him on board?

It was difficult to get him involved at first; he was very busy at the time. Hugh even suggested that we should find another composer, but I was very stubborn and stuck to my choice of Clint Mansell. The composer has has a huge impact on my life and I have always listened to his music; obviously it was a right choice for me to have Clint on board. After a while, and after many emails between us and his agent, we finally met and he agreed to work with us; it was such a magical and beautiful moment for me.

Any new projects in the pipeline for you and Hugh?

Loving Vincent was very time- and emotionally consuming so I haven’t thought much about a new project, but there are some ideas up in the air (laughs). We definitely want to pursue the same technique to make another film; we’ve been thinking of making a kind of a dark, almost horror-looking film, based on the paintings of Francisco Goya.

We would like to thank Dorota Kobiela for the interview and we wish her all the best at this year’s Academy Awards.

Written and interview by Maggie Gogler