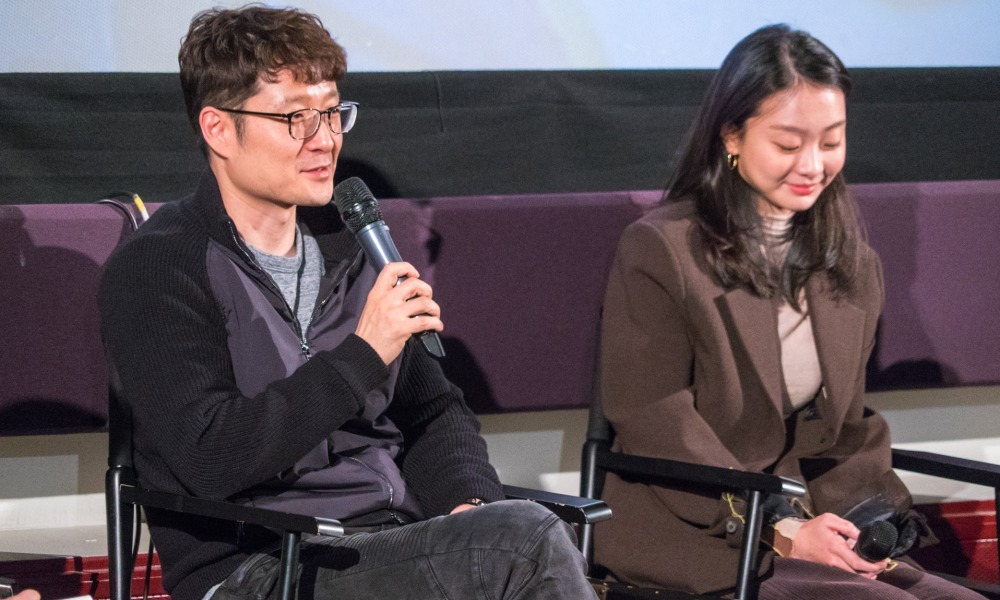 3rd London East Asia Film Festival: In Conversation with Park Hoon-jung and Kim Da-mi of ‘The Witch – Part 1. The Subversion’

Thanks to his distinctive and thoughtful writing style Park Hoon-jung has attracted a vast number of international and domestic fans for his work on Kim Jee-woon’s I Saw the Devil and Ryoo Seung-wan’s The Unjust. He then traded in his writing skills for directing, and in 2013 he made New World, an intriguing film that is arguably one of the most gripping Korean gangster productions of that year. With that success in mind, Park Hoon-jung went on to direct The Tiger: An Old Hunter’s Tale and V.I.P., the latter being a crime thriller that depicts the story of Kim Kwang-Il, a psychopath who gets embroiled in political games between the USA, North and South Korea.

This year, Park Hoon-jung is back with The Witch – Part 1. The Subversion, an exhilarating, supernatural thriller starring the newcomer, Kim Da-mi. The 23-year-old showcases her acting talents in the strong female role, in a performance which is well-nigh as good as the ruthless female protagonists in La Femme Nikita and The Villainess. Kim Da-mi won numerous awards for her characterization of Ja-joon, including the Rising Star Award at the 3rd London East Asia Film Festival and Best New Actress at the 27th Buil Film Awards.

Despite Park Hoon-jung’ and Kim Da-mi’s hectic schedules, they attended the premiere of their film at the 3rd London East Asia Film Festival in London. Before the screening of The Witch – Part 1. The Subversion, we sat down with the director and actress, and chatted about what it was like to make The Witch, the casting process for the role of Ja-joon and working with established actors such as Choi Min-soon, Park hee-soon, and Choi Woo-sik.

You are known for your distinctive and thoughtful writing style; you wrote the script for Kim Jae-woon’s I Saw the Devil and Ryoo Seung-wan’s The Unjust. After that, you became a director yourself and made The Snowdown, New Wold, The Tiger: An Old Hunter’s Tale and V.I.P. Now, you have returned with The Witch – Part 1. The Subversion. Where do you get your ideas from, and what inspired you to write and direct The Witch?

Park Hoon-jung: I get inspiration from daily life and society, and then I express my ideas into screenplays. In term of The Witch, it comes from the same context, from previous experiences that I have been through in my past life, but mainly, my new film was inspired by various Japanese manga that I was very fond of when I was younger.

Looking at New World and V.I.P, it’s impossible not to notice the significant influence of Tarantino in those films.

Park Hoon-jung: I don’t deny it (laughs). I am a great fan of Tarantino and his directing style. So yes, there must be some things inspired by Tarantino in my films.

Kim Da-mi, you are a newcomer to the film scene after debuting in 2017, and here you are, already in a lead role, in a film that got screened in Montreal, Canada, and now in London – it must have been a crazy year for you. You studied Performing Arts at Incheon University – can you tell us a bit more about what motivated you to become an actress in the first place?

Kim Da-mi: While growing up, becoming an actress was my dream. I worked hard and studied hard to become one. It feels like a dream to have been through [so much] in 2018, it’s amazing. So much has happened.

In the film, you combine various film genres, from a thriller to sci-fi to action. The final result is really good. How did you manage to balance the three in one film?

Park Hoon-jung: In modern cinema there is a lot of improvisation when it comes to combining different genres. It all depends on the narrative and how you set the film in general. Modern cinema/films are not restricted by one genre, one can move to the other and always mix and match situations. And how did I manage to combine three genres into one film? It is all my talent I guess! (laughs).

Your performance was hailed as a perfect balance between physical and emotional. How did you prepare for this role and in what way did you approach Ja-joo’s character? Did you require a lot of physical training?

Kim Da-mi: When it comes to the physical training, I went to an action school for three months to prepare for her action scenes. I also practiced singing to make sure that the scene where I am required to sing is as realistic and natural as possible.

The emotional preparation for my role was complex as the character differs in the first part and the second part of the film. I tried to figure out how to show that difference and my transformation throughout the film.

You drew on incredible cast of well-known actors such as Choi Min-soon (known for Kim Ki-duk’s Pieta), Choi Woo-sik and Park Hee-soon, as well as emerging actors, including Kim Da-mi. What was the casting process like, particularly for Kim Da-mi’s character?

Park Hoon-jung: I really emphasized the cast for this film, the characters lay within the actors I chose. I put a lot of effort and time to choose the actors. As for Kim Da-mi’s character, there were 1500 actresses competing for the role of Ja-yoon. I couldn’t find Ja-yoon’s persona in any other candidate but Kim Da-mi.

How was it for you to be a part of the project? Choi Woo-sik seems to be an interesting co-star to act with. What was your experience like, working with him and also other members of the cast?

Kim Da-mi: When I first saw the list of the actors attached to the film, I was very surprised. I was very honored to be part of this project. Working with Choi Woo-sik was great as he’s a similar age to me, we become quite friendly and he advised me a lot as well.

How long did it take to make this film and did you face any difficulties while making it?

Park Hoon-jung: The action scenes were naturally difficult. It required a lot of practice, training and bringing the equipment in. But the rest of the film came out the way I wished, we didn’t experience many problems while filming (laughs).

So what was difficult for you while shooting the film?

Kim Da-mi: I found the actions scenes difficult. That’s because I had to do physical acting in short cuts; that’s challenging – I had to perform everything that was required of me in a very short period of time. I also had a stunt double.

Did the actors follow the script from A to Z, or was there any improvisation involved in any scenes?

Park Hoon-jung: I am usually very supportive of actor and actresses’ improvision on the script, and I respect and allow my actors to do so. For The Witch, with Kim Da-mi and other new actors, I gave directions to them, simply because they didn’t have enough experience to express themselves. But for the veteran actors, I just let them do their thing.

We are finally starting to see more strong female characters in the foreground of films, and Ja-yoon firmly falls into that category. Do you feel there is a wind of change in Korean cinema?

This might be a bit of a spoiler, but given the ending of the film, where do you want to take the story in the sequel, is the film in works already?

Park Hoon-jung: Yes, we are thinking of the sequel. I am currently in negotiation with Warner Brothers. We hope to prepare for it soon (laughs).

After acting in such an intense role, do you see yourself also acting on the small screen, or do you wish to focus on your career in the film industry?

Kim Da-mi: I am willing to learn from everything and I am open to other roles, including the small screen. I am open to all sorts of opportunities.

We would like to thank Park Hoon-jung and Kim Da-mi for taking the time to answer our questions, and to London East Asia Film Festival for organizing this interview.

Written and transcribed by Maggie Gogler