On February 12, 1993, a security camera in a shopping centre in Bootle, Merseyside, captured the moment 10-year-olds Robert Thompson and Jon Venables abducted two-year-old James Bulger when his mother, Denise, had taken his eyes off him momentarily. Played by Leon Hughes (Thompson) and Ely Solan (Venables) in short film Detainment, the pair are seen playing truant, stealing from shops and messing around the city prior to the crime. Out of curiosity, they decide to see if they can get away with abducting young James.

Taking him on a 2.5 mile walk across Liverpool, 38 people saw them on their route. Some marvelled and wondered where the boys were going, but, even when two people questioned them over the distressed child’s head injury, the boys were able to walk away with him, as they claimed he was their younger brother, or that he was lost. Two days later, at Walton & Anfield railway station, James’ severed body was found. He had been tortured and mutilated by the two boys, who left the deceased child on the train tracks in the hopes it would look like he died in an accident when his body was hit by a train.

Thompson and Venables were soon arrested, but at first they strongly denied the accusations against them. In the interview room, Venables’ plea, extraordinarily performed by Solan in the short film, makes for an uneasy watch, not least because his heart-breaking and teary, yet false, confession was given in the hopes of attracting empathy. While he admitted to his crimes relatively quickly, his counterpart Thompson, denied it and put the blame solely on Venables. Hughes’s portrayal of the youngster is so realistic it’s uncanny, and one can only wish his character was fictional. 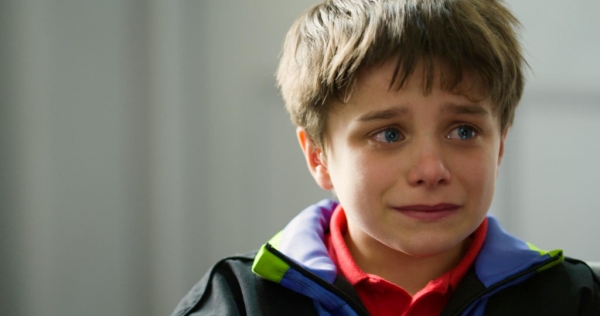 Vincent Lambe, who directed and wrote the short, rightly avoids giving a brutal description of the crime. Instead, he emphasises on the young boys’ confessions and their emotional state during their interviews with the police – as the narrative itself is based on the recordings and transcripts from the 1993 investigation. The reconstruction of the day that the crime was committed only gives a hint of what might have really happened to James (played by Caleb Mason), as the toddler’s murder is not shown on screen. Caleb’s performance also brings tears to your eyes as you scream inside “Please, not him”. He doesn’t speak, and looks helpless as the audience sees him crying and with a head injury, a scene which only increases the tension of the film.

Detainment is Vincent Lambe’s fourth short, and it is controversial and hard to watch. However, it’s necessary to show what humans, regardless of their age, are capable of. It also forces the audience to admit that the real world is a brutal place, but that it is also in need of kindness. Lambe avoids over-dramatising the events, and doesn’t label the boys evil. He decided, without being sympathetic towards either of them, to show the pair in a more humanised light.

As Lambe said in one of his interviews: “I think in the film, for the first time ever, we see them exactly as they were, and they were two ten-year-old boys who did something that was horrendous, but they don’t really know why.” A statement that begs the question: did they not?

Detainment is a well crafted and tragic 30-minute film that will divide viewers, but, regardless of this, it is a heart-breaking story that we need to be reminded of again.