Hellhole, Bas Devos’ second feature, is a draining and frank look at the trauma inflicted upon Brussels residents following the March 2016 bombings. It delivers an episodic and fragmented depiction of a hollow, sceptical and disconnected city – filled with individuals struggling in their own way with grief and isolation. Hellhole follows the story of three characters residing in the Belgium capital. Mehdi (Hamza Belarbi), a teenager of middle-eastern descent who is faced with a difficult decision when his brother asks him for a questionable favour. Wannes (Willy Thomas), a Flemish psychiatrist who is struggling not only with the death of a relative, but also with the deployment of his son to the middle-east, and Alba (Alba Rohrwacher), an Italian translator working for the EU, who is dealing with exhaustion and the heartache of solitude.

There’s a line in the film where a kid in Mehdi’s class jokingly calls Brussels the ‘Ghetto of misery’; Hellhole is certainly a film drenched in misery, but it’s not one that is melodramatic or cathartic. Devos takes an almost numb and ambivalent approach to depicting melancholy. The characters in the film are held at arm’s length, their dialogue minimal and their actions rarely explained. While we may not get a hugely detailed insight into each character’s thought processes, Devos is articulate in capturing the private lives of humans and their heartbreak. We’re offered up long static shots of characters sulking about their apartments that wouldn’t feel out of place in an anthropomorphic photo study in an art gallery. The camera tends to linger a lot, Hellhole never tells a viewer what to think but forces them into a corner of observing something about each sequence. Such static shots are beautifully framed with striking colours and reveal a voyeuristic take on singularity and despair. 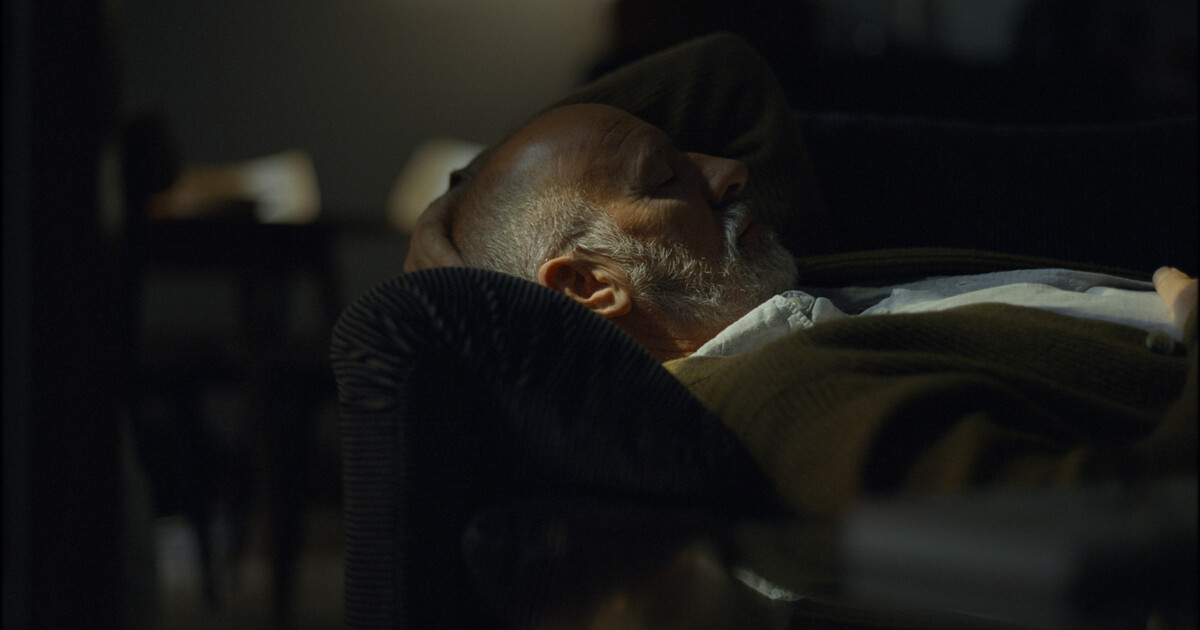 Unfortunately, an over-use of such lengthy shots can grow tiring in this film, and certainly take a toll on one’s attention span. Hellhole is undeniably a testing film. It’s a film with a lot of space and absence – that absence usually being the warmth of a loved one- which makes for some poetic reflections but can feel a little repetitive at times as the film doesn’t seem to want to go very far with these themes. There’s only so many times you can take in a long shot of an empty apartment corridor without growing a little disinterested.

There’s a certain haziness about the characters in Hellhole, as if they’re drifting through a world they’ve been harshly severed from. Something well-articulated by Devos’ recurring use of crisp close-ups of faces against a fuzzy backdrop of Brussels and his infatuation with showing scenes of dialogue through reflections or obstructed frames. In one scene, Alba is desperately trying to find a connection with her doctor (whose face remains out of the frame). ‘I can speak a little dutch’ she pleads to him as he ignores her and tries to rush her out of his office. She starts to then urgently confess to him her trouble with her unfaithful boyfriend – ‘ 21st-century love’ she calls it. It’s one of the more straightforward scenes in the film, it’s humiliating, awkward and makes an audience feel helpless, but it perfectly depicts how desperate she is for some human connection.

In one of the more daring scenes, Wannes is coming to terms with the fact a family member is going to die very soon. After a muffled conversation, he steps outside his kitchen into his moonlit garden. Then, the camera takes a stroll for a few minutes around the exterior of the house; slowly revealing new life from each corner of Wannes’ home as the camera creeps past every window until it reaches Wannes again. Only now, it’s dawn and his beloved has passed on. It’s one of the more exciting feats of cinematography in the film and breathes a bold life into the story – a bold life that I wish was more present within the rest of the film.

Hellhole is an incredibly gracefully shot film and one that delivers on its promise to attend to a more mellow and realistic take on modern-day trauma. However, it’s also one that is unnecessarily airy and drawn-out, never quite hitting a specific articulate point and makes for a draining and weighted watch; perhaps one that would have been much more effective as a short.