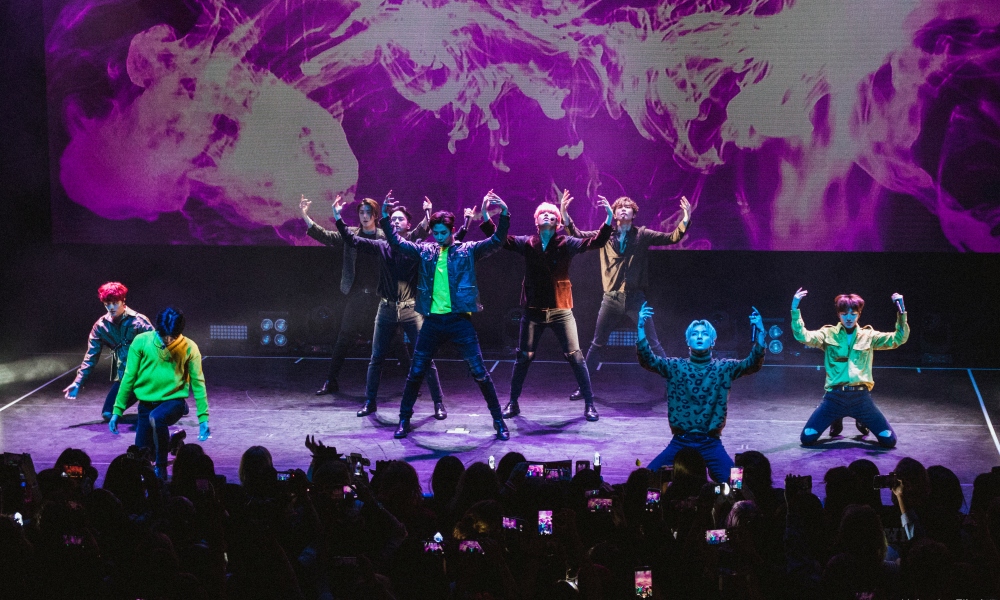 To most Korean idols, the K-pop world is anything but a bed of roses. With the boy and girl groups being categorized into ‘A’, ‘B’ and ‘C-list’ levels depending on their popularity rankings, many of the artists have to fight hard to reach a decent place.

Debuting under FNC Entertainment in 2016, SF9 has been increasingly getting closer to becoming an ‘A-lister’. With their unique approach to pop music and with over 10 million views on their YouTube videos, they are slowly closing the gap between themselves and those on the top of the K-pop’s ‘food’ chain. The group has yet to utilize a strong storytelling approach in their songs, but, with the boys’ eye-popping visuals and humble personalities, the fans can keep themselves busy while they patiently wait for more meaningful lyrics to appear in SF9’s repertoire. That said, within a short period of time, the group achieved success both on the domestic and overseas markets (and sold-out their USA tour) and not only that; they secured the title of Billboard’s 2019 K–Pop Breakout Pick. SF9 has recently finished their USA – Europe Unlimited tour, with the last stop taking place in London. 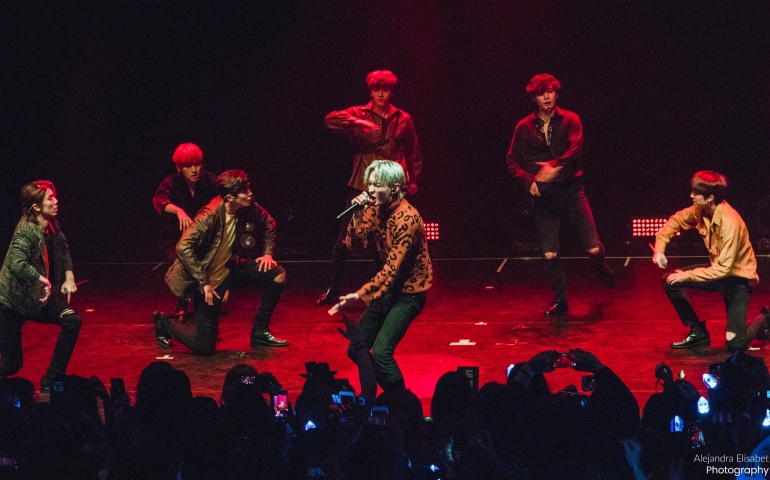 Shepherd’s Bush Empire. SF9, to the huge applause and loud screams, welcomed their fans on the iconic stage and dominated Sunday night with an almost two-hour show. The group kicked off their concert with catchy and ‘sing-along’ lyrics of Unlimited; the nine-piece ensemble dived into a dance routine so well that one barely dared to blink in order not to miss anything. Without wasting any time, they smoothly sang their way through two more songs, including their newest single Enough. Shepherd’s Bush stage is not a big one, and the group’s staging wasn’t sophisticated at all, but they compensated for that with thrilling visual images being continuously screened in the background. SF9 furthermore managed to build a great atmosphere not only by singing and dancing, but also by interacting and joking with their fans. With choreography and heart-pumping tracks dominating the first part of the concert, the crowd started to scream so much that some in the attendance must have regretted not bringing earplugs along for the ride… There is no doubt that SF9 is no average group; they are K-pop representatives, but they also combine various other genres in their music, from electro-pop and house to Latin-pop. 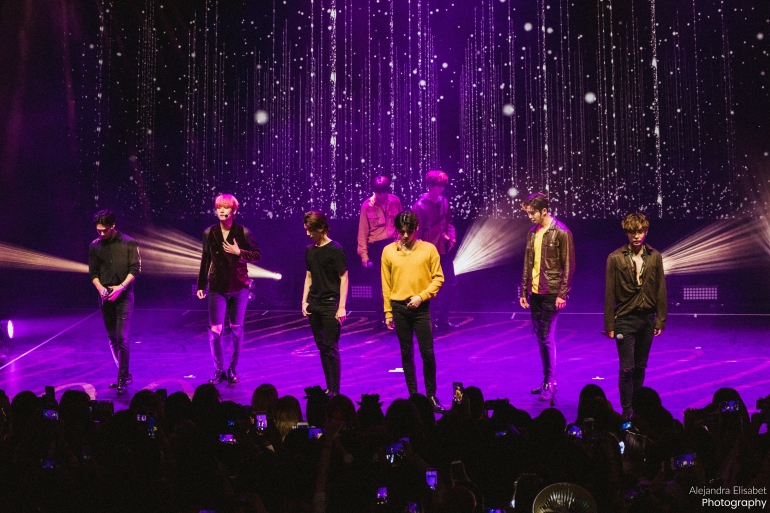 Splitting K-pop groups into units during concerts is a common practice and SF9’s performance was no exception. The first unit of three members consisting of Da-won, Zuho and Young-bin sang a cover of Wiz Khalifa’s See You Again, a heart-rending song from Furious 7 soundtrack. While the rep section was delivered with excellence, there was some room for improvement in the vocal performance as Da-won faltered on a few notes. The 80’s mix of Just On My Way and 4 Step made the group really stand out, showing that the members know what to do to keep their fans in high spirits. Also, showing videos during breaks is a clever time-filler, and SF9’s were luckily a pleasure to watch. 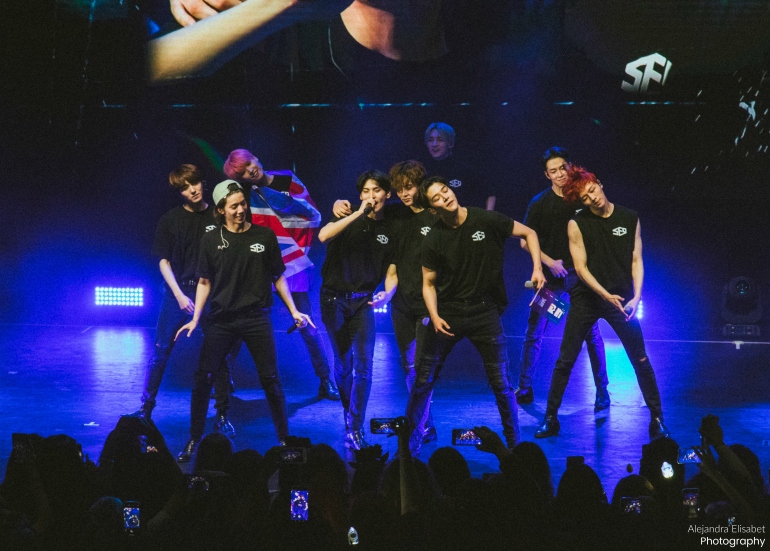 After the energetic first part of the gig, the group was again split into units and performed a couple of ballads. Tae-yang and Jae-yoon sang Justin Bieber’s Nothing Like Us, and the duo delivered with delicate and clean vocals. With his cover of Bruno Mars’ Versace on the Floor, In-seong stood out as the best performance of the night, simply because his vocals were sublime; the notes were well-executed and his voice control was first-class – one could argue that the cover surpassed the original. Another highlight of Sunday’s gig were rap performances; they were strong throughout, particularly when Hwi-young and Young-bin performed their hard-hitting raps to Zero off. With Fanfare, the song that SF9 debuted with in 2016, O Sole Mio and the pop-electric Now or Never, the group was ready to wrap up their concert. As the show neared the end, the boys came back on the stage, tired and out of breath, but powered by deafening screams from the fans, and they sang four more songs, including Dear Fantasy and the English version of Enough – they really showed that they gave it their all. 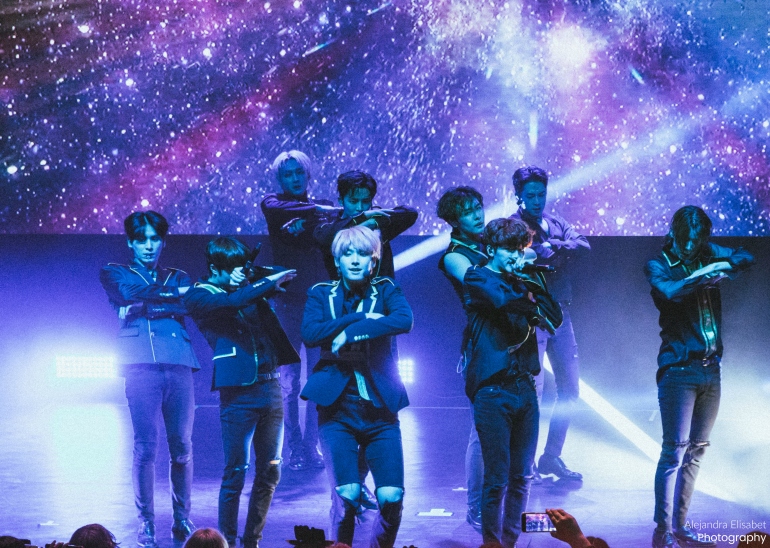 It really says something when a person goes to a K-pop gig without any expectations because the group is still fairly new on the market, and then leaves said gig feeling happy and satisfied. It also serves as a reminder of how important it is to support emerging artists. SF9 surprised with their quality performance, and even with a couple of vocal slips along the way, the boy group is one to be reckoned with.

Photos © Alejandra Elisabet Photography for View of the Arts

* Note to the organizers: View of the Arts would like to thank My Music Taste and Shepherd’s Bush Empire’s stuff for their support throughout the concert.