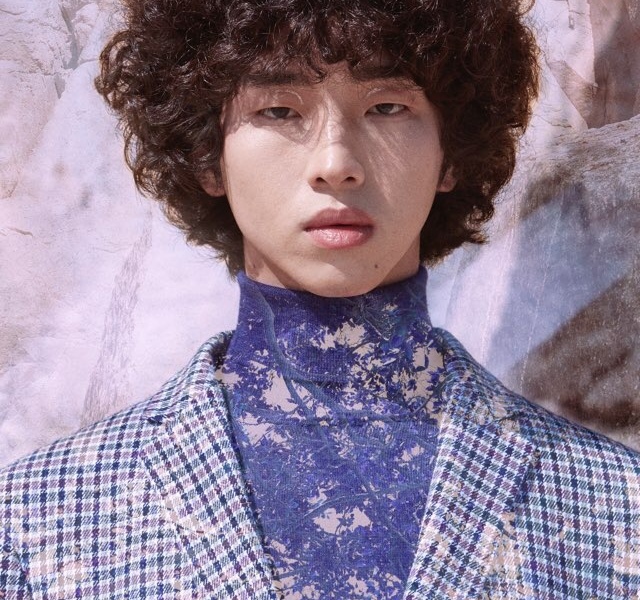 “Fashion Is a Method of Expressing Who I Am” – In Conversation with Kim Won-ki, a South Korean Model

From runways to magazine photoshoots, music videos to countless lookbooks, there is no doubt that Kim Won-ki, a South Korean model, is on a roll. Distinguished by his perms and babyface, Won-ki’s doe-eyed stare has no trouble grabbing the attention of fashion lovers as well as designers.

Kim Won-ki has various campaigns and editorials under his belt, including a photoshoot for Esquire and Arena, Adidas Original collab with Musinsa, and a 2018 BHM Youth Culture campaign alongside Jay Park and Gray, two well-celebrated Seoul based artists. Among other things, Won-ki also appeared in AOMG’s DJ Wegun’s music video, Hailey’s Burning and Lee Seol Ah’s Stay.

Kim Won-ki doesn’t mind dressing fashionably, however, he likes to emphasise his individual style as well. Nowadays, people like seeing models that are less artificial, models that are natural, and Won-ki can deliver that. Not only is his physical appearance naturally beautiful, his general presence as a model is irrésistible too. On top of everything, Won-ki experienced modelling in Hong Kong and South Africa. One might be also surprised by the fact that Won-ki finds pleasure in woodwork when he is not busy with modelling.

Recently, I spoke to Won-ki about fashion and the dynamics between models and photographers. He also shared his thoughts about the pressure of fashion shows and told our readers all about his guilty-pleasures.

Do you remember the first moment when you felt that your future should lie in the fashion industry?

Kim Won-ki: I was 14 when I first felt that my future is in modelling. It was after watching a modelling competition show on TV.

Kim Won-ki: My bright personality, little spunk, and a slightly asymmetrical face all help me in working as a model. As of now, I don’t think I have ever felt there’s a part of me that complicates my work.

Kim Won-ki: Before the photoshoot, I ponder on how fun this shoot is going to be, what great people I’m going to meet, and how interesting the results are going to be. During the shoot itself, I completely focus on the work at hand while still imagining something fun in my head. No matter where or when, I don’t think I’ve ever felt there was something that gets in my way.

You have model friends that are in the spotlight, have you ever felt like you were competing for similar jobs? Have there been any jobs you’ve been disappointed not to get?

Kim Won-ki: I have many different friends, and some friends do receive a lot of spotlight from the public. I am not competitive about it though. I believe everyone has his or her time to shine, so I tend to work hard so that my own time comes soon.

Recently, there were several ads I wanted to be in, but I wasn’t selected at the final round. But this became a motivation for me to grow one level higher and work harder.

How would you describe your own fashion style? Considering anything and everything from colour to historical eras and more?

Kim Won-ki: Personally, I like Dior Homme during Hedi Slimane’s era and brands with a dark and Avant-garde mood such as Rick Owens, Ann Demeulemeester, Julius, and CCP.

Gianni Versace once said: “Don’t be into trends. Don’t make fashion own you, but you decide what you are, what you want to express by the way you dress and the way you live”. What does fashion mean to you?

Kim Won-ki: I also don’t like following trends. Although I like fashion styles from the past, I prefer to modify them so that they fit the current era and so that they are catered to suit me even more. I think fashion is a method of expressing who I am by wearing clothes that suit me.

You have done a few editorials; can you describe the model-photographer dynamic? Do you ever feel uncomfortable being photographed?

Kim Won-ki: There definitely seems to be a rhythm, a kind of give-and-take breathing, between the model and the photographer. People typically call it a ‘boom clap’. When I shoot with a photographer who I hit it off with, it allows me to bring out more of ‘me’, and then the results often come out above and beyond what I originally anticipated. In general, I don’t think I’ve ever felt uncomfortable about being photographed. My default belief is that even if the rhythm is off between me and the photographer, I must take the lead and pull along that photoshoot to completion.

Looking at the fashion world and models, it seems that today, models are given more of a voice – especially through social media – rather than just being the image of a brand. What are your thoughts on social media and its role nowadays? You’re active on Instagram, do you have any self-imposed rules?

Kim Won-ki: I think social media’s role is to be a type of profile for the person. I show my working life and my daily personal life on social media and sometimes, I get calls from various brands because of a photo or a video I had uploaded. Ultimately, social media is to increase my exposure so that I reach more people.

You have recently started to learn how to make furniture, what inspired you to take on a challenge like that? Would you like to design and make furniture in the near future?

Kim Won-ki: I felt the need for a hobby while working as a model. So, I learned things I’ve always wanted to try one by one, and making furniture seemed to fit me best so I continued. I think I still need to learn more and need more time. Of course, I do want to design and manufacture my own furniture someday, and I plan to work hard until that time comes. I sense that this hobby is going to stay with me for a long while.

The fashion industry has slowed down recently, however, in general, how do you deal with the pressure of fashion shows?

Kim Won-ki: Of course, fashion shows have changed so drastically in our current world compared to how they used to be. Now, I don’t get to have the same level of euphoria of standing in front of a big crowd. But when I think of designers who are still preparing and working hard to put together digital fashion shows, I think we as models should also prepare and adjust to this new fashion world that is only going to continue changing.

Who encourages you and supports you from the side-lines on your hardest days when you do modelling?

Kim Won-ki: I usually get cheered up or encouraged by my parents or people I became close to from modelling work.

In your free time between shows and campaigns, what helps you relax? How does your perfect day off look like?

Kim Won-ki: I work out, do woodwork, or hang out with friends from work on my days off.

Do you have any guilty pleasures you can share? Maybe something you love to eat or music you secretly love listening to?

Kim Won-ki: I’m actually a foodie. I love food, but I tend to gain weight as soon as I eat so I exercise more on days when I’ve eaten a lot. For music, I usually listen to K-POP from the 80s and 90s. The lyrics and melodies are very poetic, so I recommend you give those songs a listen.

Facing forward, what would you like to achieve this year? Do you have any plans with regards to modelling? Perhaps you have different plans for this year?

Kim Won-ki: My goal for this year is to find work I can do with my family if the opportunity comes. Also, since I’ve been a model for 5 years now, I wanted to take on a new challenge. So, I plan to start learning acting. I’m bringing a lot of passion to the table as I take on this new challenge. I’m already excited and looking forward to it.

Fashion, In Conversation with