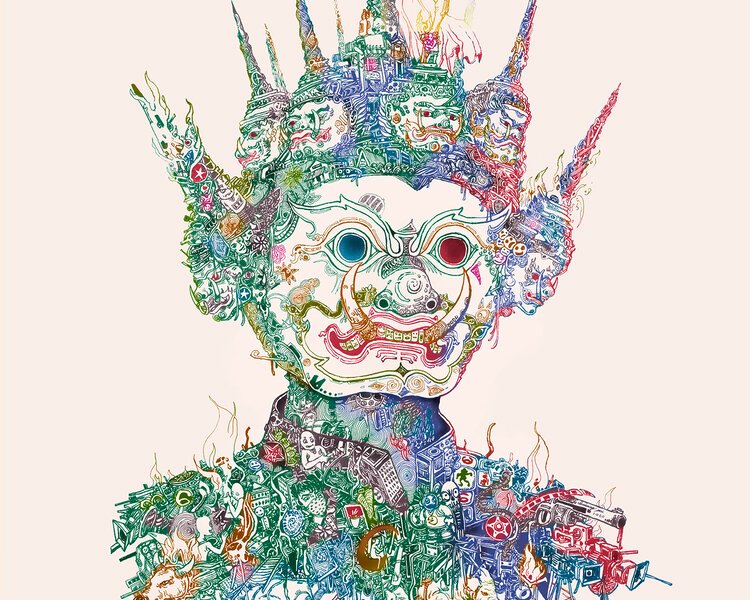 Wai Bhone (Okkar Dat Khe) sits across from his producer in his office. His producer pours over Wai Bhone’s latest film script. He crosses out lines and spits out suggestions – cut out smoking scenes – they set a bad example, make the criminals more polite – we must show how polite Burmese people are, and put a disclaimer amongst the credits that criminals shouldn’t be allowed to escape conviction. All this he cites in reference to Myanmar’s strict censorship laws. Working under censorship regulation and a next-to-nothing budget, Wai Bhone is desperately trying to successfully land his feature film debut after years of working on straight-to-video projects. Directed by Maung Sun, Money Has Four Legs is a relatable, forthright, and dry dramedy about a struggling and exhausted director, not even trying to make it big, but just trying to get by.

On set, Wai Bhone faces a whole array of obstacles other than just censorship restrictions. He faces reluctant actors who would rather take selfies than learn their lines, looming deadlines, and the pains of trying to film on land without permission hoping the security guards don’t catch on. At home, Wai Bhone faces power cuts, overdue rent, and a passive-aggressive landlady who shows potential tenants around his apartment without so much as an eviction notice. On top of all this, the bank his wife works at has declared bankruptcy so his wife is now jobless and all of their daughter’s tuition savings are completely gone. The only thing left of value in their apartment is a prized Myanmar Motion Pictures Academy award won by Wai Bhone’s father, an acclaimed film director that Wai Bhone now lives in the shadow of. While the woman at the DVD shop doesn’t even recognise Wai Bhone’s name, old acquaintances stop Wai Bhone on the street to mention his father and all his glory. Taking a more realistic view on the trials and tribulations facing filmmakers, Money Has Four Legs is a film all about the underdogs of the world and the struggles of trying to make it big in the film business.

Often swinging by Wai Bhone’s apartment is his good-natured brother-in-law Zaw Myint (Ko Thu). Himself a small-time actor, Zaw Myint‘s acting history consists of small roles in B movies and being renowned for starting drunken fights with other actors. After an incident where Zaw Myint breaks a camera on Wai Bhone’s filmset, the pair are left with no option but to rob the bank Wai Bhone’s wife used to work at to try and salvage Wai Bhone’s career.

Here, the filmmaker’s journey turns into a movie plot of its own as Wai Bhone and Zaw Myint attempt a clumsy bank heist. On the way they blast heavy metal music (rotating the dashboard Buddha figurine so he can’t see their actions) and run over a stray dog – and consequentially end up being late to their own bank heist so they can take it to the vet.  No doubt, Money Has Four Legs is scattered with funny quips and small witty details. However, the film still misses that bit of zest required to construct a fast-paced and exciting crime comedy. Alternatively, it does not sink its teeth deep enough into its characters to produce a moving and hitting drama. The film is stuck somewhere between the realms of drama and comedy, sometimes teasing fragments of both but never fully hitting its mark. This results in the film feeling rather slow-paced and lethargic at times as it flits between its various storylines without fully committing to any true resolution or pay-off.

In one scene, Zaw Myint drunkenly splutters ‘Money has four legs. When money runs from you, you can’t catch it.  But if money chases you, try as hard as you want, you can’t escape from it’. Ultimately, if you peel back the dithering and diverging plotlines, Money Has Four Legs at its core is a film trying to scream about the inequalities of capitalism and the injustices facing the poorly paid workers that prop up the film business. Throughout the film, Wai Bhone is constantly chasing money in an attempt to resolve all his issues – and it’s something that is constantly slipping through his fingers. There’s even a sweet irony in the film in that when Wai Bhone finally gets the money he needs; he is almost certainly losing it straight away. If only the film clung to this irony and satire more tightly and channelled it throughout, it could have resulted in a biting and twisted take on the life of the struggling filmmaker.

Money Has Four Legs is a perceptive and honest portrayal of life as a struggling filmmaker and an interesting insight into Myanmar’s film industry. Although offering up splices of witty comedy and drama, this is a film that struggles with its structure and falters in its decision making – resulting in a film with interesting potential in its themes but one that is ultimately slow and directionless.