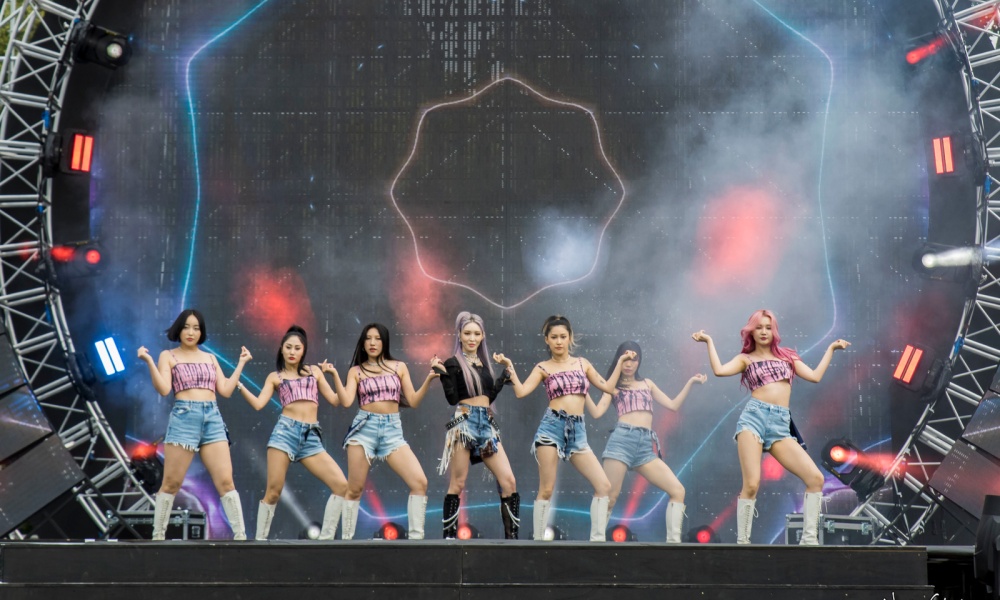 The UK has always been famous for its incredible music festivals. Since the 1960s, the country’s outdoor music events have boasted diverse line-ups and a variety of music genres to offer fans. Whether it is Pop, Jazz, Hip-hop, Rock or Metal, there is always something for everyone.

But what about K-pop? This particular music genre has never had its own festival celebration in the UK, however everything changed earlier this year when HallyuPopFest greeted K-Pop fans at Wembley Arena. The event was quickly followed by MIK Festival, an outdoor K-pop and Korean Hip-hop show. Looking at both of the events, MIK Festival brought something different to the table. Magic Sound Entertainment, the organisers and promoters of the show, truly outdid themselves when it came to their line-up.

Taking place on Saturday July 30th and Sunday 31st in Southwark Park in London, MIK Festival was split into two different events. Saturday was all about K-pop with performances from HOLLAND, Red Velvet, PENTAGON, VIVIZ, Cherry Bullet, SUHO, CHUNG HA, and Golden Child. And Sunday saw some of the biggest and most note-worthy Korean Hip-hop artists take to the stage, such as pH-1, Loco, Gray, Jay Park, Lee Hi, Eipk High, JESSI, and DOK2.

At 12 pm on Saturday the gates to the MIK Festival opened and, although the show was scheduled to start at 2.30 pm, thousands of fans flooded the festival grounds way ahead of the concert. HOLLAND was the first act to perform. Known for being a great fashionista as well as one of the most outspoken advocates for LGBTQA+ rights in his native country of South Korea, HOLLAND kicked off his set with I’m so scared, followed by I’m not so scared. Although he only sang four songs, his music carried (and still carries) a message of tolerance, love, and equal rights for everyone. Sadly, even after a few years of performing, HOLLAND hasn’t improved his singing skills whatsoever. Even though he was often off-key, and vocally unable to hit high notes, the young man’s high energy at the short “concert” was something that some of the crowd loved.

Honestly I lost my mojo for dancing and I started to wonder if my energy would come back, and it surely did when Cherry Bullet, a girl group of seven cheerful and lovely young ladies, appeared on stage. And as embarrassing as this might sound, I got so distracted by their performance that I did not write down the songs they sang. But we should all look on the bright side: Cherry Bullet completely immersed me with their energetic show. I did not expect to have so much fun listening to a group that I barely knew. So, dear Lullets, forgive me for not giving you the titles of the songs they played. But we have something special for you! Cherry Bullet shared their thoughts on MIK Festival:

Hello, this is Cherry Bullet! It’s the first time for us to perform in London thanks to the MIK Festival. We were a bit nervous, but were able to perform happily because so many global fans welcomed us and cheered together! We were surprised and thankful that everyone sang and danced along to our songs and we are so happy to have made such a great memory. We want to see our global fans again very soon. Thank you!.

The next act to follow was Golden Child, a boy group known for their top-notch fashion and dance routines – this time I made sure to make notes. Dressed in elegant white and beige outfits, the young men smashed the stage with their choreography and live singing. Witnessing their performance as they showed off their different vocal abilities and talents was just endearing to see. Golden Child sang their biggest hits, including Ra Pam Pam, Bottom of the Ocean, and concluded their show with DAMDADI. Outside of being great entertainers, the group also knew how to enchant the crowd.

The two aforementioned groups definitely set the bar high for the rest of the performers. However, the next singer to perform, CHUNG HA, raised that bar even higher. The artist commenced her show with her 2019 hit Snapping, followed by Sparkling and Flying on Faith. Accompanied by a few female dancers, CHUNG HA not only showed her moves but proved, once again, that her vocal tone is very clear, not only in the studio but also live. Without any excessive breathing and vocal tension, the singer delivered a beautiful show. The artist performed eight songs altogether, including the unreleased song Don’t Believe in Love. She finished her mini-concert with Why Don’t You Know. What is really interesting about CHUNG HA is that she has always added dynamics to her songs – she knows when to sing loudly, softly, and powerfully. While using these dynamics, the young singer showed that she is capable of presenting a high-quality performance.

After over two hours of dancing, swinging from one side to another, it was time to do more jumping, this time to VIVIZ, a trio that consists of former GFriend members: SinB, Umji, and Eunha. Equipped with cuteness and talent, the girls rocked the crowd to the fullest. Like CHUNG HA, they performed eight songs, including Lemonade and BOP BOP. Wearing summer outfits and dancing away to the rhythm of their songs, VIVIZ’s music can easily become stuck in your head, not just because of the lyrics, but because of the melody. You hum the tune even if it’s not completely your style, you just can’t help it!

PENTAGON, SUHO, and Red Velvet were the last acts to perform on July 30th. PENTAGON is one of those rare K-pop groups that continues to produce their own music while many of their contemporaries are not allowed or able to do so. They always shine in each and every one of their releases, and seeing them perform live was a real treat. During the festival the group performed many of their famous songs, with Call My Name being my favourite. They also sang The Game, Do or Not, and Baby I Love You, among others. Their synchronised dancing and frequent changes in position were really thrilling to see.

The mood changed when SUHO of EXO and his live band appeared on stage. Dressed in a black denim jacket and jeans, SUHO began his set with Let’s Love, followed by Morning Star. His next track, Grey Suit, really impressed everyone gathered in Southwark Park. It is a superb pop-rock song that allowed the artist to showcase the stability of his voice. He wasn’t off-pitch, neither did he sound shaky or wobbly – he had perfect control over his voice, and every single note was beautifully executed. After that, the singer moved to Hurdle and then performed a cover of Meet You by Chance, which was originally written and composed by Songgolmae, one of the most popular Korean hard rock bands in the 1980s. The Beatles’ Let It Be was another melody that SUHO presented to the crowd, and while performing his next track, O2, the artist showed that his registers are something to be highly praised. He projected and held his voice together very well, whether it was a chest voice or head voice, he did a great job. SUHO concluded his concert with Made In You, which showed the singer’s sublime vocal agility once again. I wished that he would have performed a hundred more songs that day.

However, there was one more artist on the menu, Red Velvet, a group that is known for their versatility. With their bright yet feisty personalities, the girls closed MIK Festival on Saturday. They performed nine songs, including Feel My Rhythm, Psycho, Bad Boy (English version), and Carpool, just to name a few. To the screams of their fans, Red Velvet danced, engaged with the crowd, and sang their hearts out. Although they experienced a few vocal hiccups here and there, they proved why they have been going strong since 2014 – they are super powerful with their stage presence.

Over the span of more than 6 hours, the idols lit up the MIK Festival stage. It was truly a K-pop extravaganza that encouraged thousands of people to move their feet. All the artists connected and engaged with the audience, often speaking in English, as well as Korean (with the assistance of an interpreter), and showing their gratitude for being in London at such a big outdoor festival. Without a doubt, K-pop is an unusual phenomenon that is worth getting to know better – perhaps it will seduce you like it has many other people around the world. And if MIK Festival returns next year, be reassured, I will be the first one in the queue.

View of the Arts is a British online publication that chiefly deals with films, music, arts, and fashion, with an emphasis on the Asian entertainment industry. We are hoping our audience will grow with us as we begin to explore new platforms such as K-pop and continue to dive into the talented and ever-growing scene of film, music, and arts, worldwide.