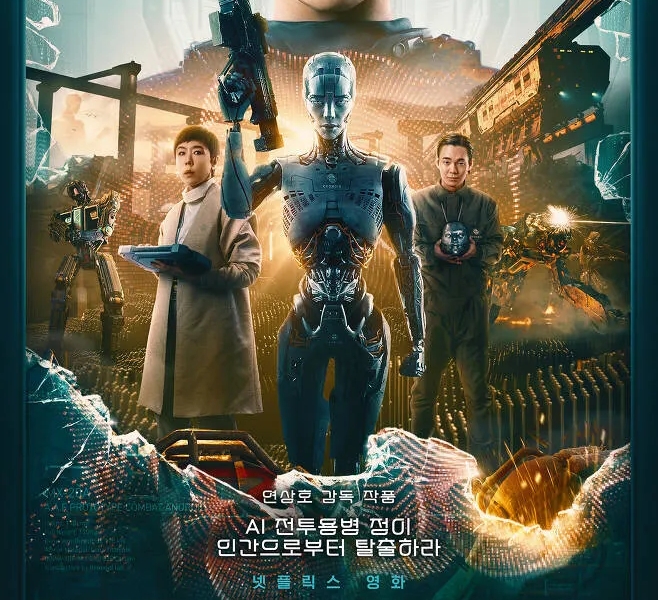 Most contemporary sci-fi blockbusters proudly wear their influences on their sleeve. In a movie culture where franchises are dominant, any nods to beloved films of the genre’s past can help gravitate an audience’s attention towards any original project; as much as science fiction thrives on originality, when making movies on this scale, it doesn’t hurt to dip into tried and tested crowd pleasing waters every now and again. But there’s a fine line between lovingly alluding to those influences and being completely derivative – and it’s in that latter camp where Jung_E, the latest Netflix project from Train to Busan director Yeon Sang-ho, decisively falls.

A film with big screen ambitions cursed to only ever being viewed on small screens, Jung_E comprises 99 minutes of overly familiar world-building cribbed from various recent sci-fi efforts, stitched together into a largely underwhelming final product that feels cobbled together by an algorithm. There’s the class-conscious commentary of Neill Blomkamp’s Elysium, the Groundhog Day-meets-Starship Troopers time loop of Edge of Tomorrow, and evil androids straight out of I, Robot, right down to the straightforward character designs. Not all of these films are critically revered, and yet even the weakest of these feels inherently stronger when placed in comparison next to Jung_E.

Arguably the most notable thing about director Yeon’s film is that the devastating effects of climate change on Earth are baked into the premise, and it has absolutely nothing to say about this significant issue. Like much else here, it is just thoughtless world-building, with no additional commentary other than what a ten-year-old could simplistically understand: “this is dystopian and bad”. The story takes place in 2194, although we receive exposition on multiple occasions filling us in on the recent history leading us to this point; climate change has made Earth uninhabitable, and rich people have fled the Earth to move to eight intergalactic colonies, whilst the poorest are stuck on the ground in ruined cities, largely manufacturing goods for those in the skies.

So far, so Elysium. Then, we learn that the colonies have split in two, with one declaring independence and rechristening itself the Adrian Republic, with whom our allies have been in battle for forty years. Following the death of their star army captain Yun Jung-yi (Kim Hyun-joo), they’ve created an AI styled after her using her core memories – but even after years of attempts, they can’t get it to pull off her failed mission. This is where Yun Seo-hyun (Kang Soo-yeon, in her final screen performance) comes in; she’s Yan’s daughter and a research leader aiming to perfect the AI. However, on being told she only has three months to live, with the project going nowhere, she shifts her focus towards “saving” this surrogate mother figure designed purely to fight.

In the past 12 months, we’ve seen a major shift back towards wholehearted sincerity in our action blockbusters, with sequels to both Top Gun and Avatar refusing the tongue-in-cheek approach favoured by Marvel in order to take their silly premises entirely seriously. It’s surprisingly infectious, feeling fresh within a blockbuster culture thriving on self-deprecating, borderline-meta quips at its own expense, even as those stories thrive on cliches. A stronger iteration of Jung_E would exist within this same space, making you care about the characters so much that you could easily overlook the narrative cliches on which the story is built. And yet, what should be the heart of the story – a complicated mother/daughter relationship – is never given the time to develop, existing purely as a narrative beat to move things forward.

That this is coupled with a commentary on how the memories of our loved ones are used by corporations following their passing (something prevalent in the social media age) should be particularly poignant. Instead, it’s just another aspect of this tale that’s frustratingly underwritten; the better version of this movie is in clear sight, through all the small details of these characters and their world briefly alluded to before moving on as quickly as possible. But whilst Yeon Sang-ho is uninterested in making a thoughtful sci-fi blockbuster despite all the ingredients being handed to him on a plate, he at least has a keen interest in staging the action sequences bookending the undercooked drama. The introductory set piece (one of the many simulations of Yun’s failed mission), and much of the third act prove exciting in spite of their familiarity. What a shame that we’re never given a reason to care about their stakes whatsoever during the unsatisfying story in-between.

View of the Arts is a British online publication that chiefly deals with films, music, and art, with an emphasis on the Asian entertainment industry. We are hoping our audience will grow with us as we begin to explore new platforms such as K-pop / K-music, and Asian music in general, and continue to dive into the talented and ever-growing scene of film, music, and arts, worldwide.