In Conversation with Yoon Seok- ho

Yoon Seok-ho is a South Korean television director, whose status was solidified with the success of the TV dramas Autumn in My Heart in 2000 and Winter Sonata in 2002, which are both considered pioneers in Korean melodramatic series, launching the fever that is commonly referred to as the Korean Wave. For years Yoon Seok- ho worked as a senior producer/production director for KBS (Korean Broadcasting System), a South Korean radio and television network, founded in 1927. He is currently a president of Yoon’s Color Ltd.

Yoon Seok-ho has always demonstrated his supremacy in making melodramas using symbolism, parallelism, repetition and timing as provocative ways to stir emotions and draw tears from the audience, especially in Autumn in My Heart and Winter Sonata. Although both dramas were basically love stories, the series tackled many contemporary themes such as character identity, loss of love as well as issues with first loves, parental love and puppy love. I am sure most people have experienced at least one or more of these different problems and shades of love.

Recently Yoon Seok-ho did a presentation on Drama & Korean Style at SOAS University, London. Where he talked intensely about Korean Wave and discussed a spectrum of deep emotions and cultural proximity. He also talked about the immense success of Korean dramas abroad and its impact on the audience.

It was a great honour to interview such an inspirational filmmaker. We caught up with Yoon Seok-ho at SOAS University a few days ago, where we talked about his work, the film industry and what he likes to do in his spare time. With the help of my lovely friend, Deborah Hin, who kindly agreed to interpret the interview for View of the Arts, we all sat comfortably and started the discussion by asking director Yoon about the popularity of his two dramas Autumn in My Heart and Winter Sonata. 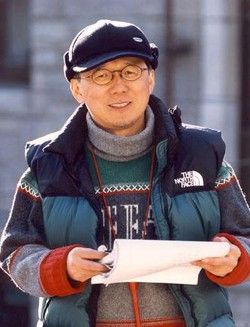 Yoo Seok-hoo © Courtesy of the photographer

You have created one of the most popular TV dramas of the 21st century, which were, and still are, immensely popular throughout Asia as well as Europe. What do you think made Autumn in my Heart and Winter Sonata so well-known around the world?

Yoon Seok- ho: I liked the story. I thought if I made a story, like those two dramas, it would be interesting, rather than wondering whether people are going to like it or not. Surprisingly, they took pleasure in watching Autumn in My Heart and Winter Sonata. I wonder why? I guess love stories are a topic that everyone is interested in and a lot of people can relate to it. Both dramas were love stories. Even though these two were expressed through gentle love and purity, love, as you know, can be shown and interpreted differently.

Autumn in My Heart, for example, emphasized family love, young people’s love and relations between people. In Asia this is a lot to do with cultural proximity, particularly in South Korea, where the family plays a significant role in everyone’s life. Outside of Asia it is more about an individual. Perhaps this theme made it so popular in Asia. Especially after Winter Sonata was released, the interest began to spread beyond and outside of Asia, and around that time I was introduced to European and American newspapers. In 2004 Winter Sonata became immensely popular in Japan. I believe that it’s that success which not only introduced the Korean Wave to the audience, but it also developed into a social and cultural phenomenon.

When asked, by our guest editor, Jackie Tatham, about setting the mood for certain scenes, whether it’s a love scene or heartbreaking, and whether there were special measures on set to ensure that the actors and actresses could work to their best abilities during those scenes, this is what director Yoon Seok- ho had to say:

Yoon Seok- ho: It is very hard to distinguish because there are so many different techniques. It all depends on scenario, situation and actors too. When certain emotions need to be expressed, such as sincerity or angst, you really need to check if actors know and understand the emotions. It is only when they feel they can act it. Even when the actors understand the emotions, it is about how they express it. Some actors think with their heads instead of linking the emotions with their hearts.

He also said that he normally gives his actors time to understand the emotions and once they do, he added ” You can see the change in their eyes. I also ask them, after a while, are you ready?” It seems to me that Yoon has a good relationship with all the actors on set. Mutual understanding, respect and patience definitely adds a great note to proper filming. It’s a pleasure to listen about how he works on set. I wish more TV filmmakers were as humble as he is. We chatted and chatted until the third question popped out.

VOTA: How did Oh Soo- yeon get the idea to write the script for Autumn in My Heart and Winter Sonata ?

Yoon Seok- ho: Well, there are two ways when it comes to filmmaking, either a script writer comes up with an initial idea or a producer. In the case of Autumn in My Heart, I got an idea from watching a documentary, which was based on a real situation; a mother’s heartbreak. I linked my idea and the documentary story and thought, what if I made a film about a couple’s heartbreak? What would have happened with this kind of an idea? I gave my proposal to the script writer, Oh Soo-yeon, and obviously she came up with all the details based on the idea I had.

VOTA: To some viewers, particularly those in Europe, the quantity of emotions used in some Korean TV dramas is overflowing. To some, however, it only serves to make the film stronger. Why is that? Is the emotional side of the dramas more important than the storyline?

Yoon Seok- ho: It is very important to get a balance between a storyline and emotions. For instance in Autumn in My Heart there’s a lot of emotions, however, the storyline was simple: there’s a couple, they meet and fall in love, they break up and, after 10 years, they meet again and rekindle their relationship. It is a simple narrative and yet complex due to its emotional details. As I mentioned before, Asian people are more emotional and family orientated, however, Westerners are slightly different. For them the filmmaking process is based on rationality and logic. That is why non-Asian countries end up with more detailed storylines rather than films filled with emotions. You get more detective and mystery dramas lacking in melancholic storyline. Korea, on the other hand, overflows with tearful shows and have less spy or detective TV  series.

I have been watching Korean dramas for a while now and there’s one particular thing that really caught my attention. In most of the dramas there is always that perfect young man with unbelievably impeccable qualities. So I asked Yoon if this kind of stereotype may cause confusion among young people, particularly girls, on what’s real and what’s fantasy? His response to the question started with a gentle laugh and then he nodded his head saying ” Yes, it’s true “. He said that he did consider the difference between fantasy and reality and wondered whether there would be a negative aspect to it. However, he added, the reality is not so nice and “can be boring”. So he almost felt that there is a need for fantasy and such characters in TV dramas. He said ” Where do you get the break from the reality?”. Yoon also added, in a very humorous way ” it is also the audience’s responsibility to distinguish what’s real and what’s fantasy.” After an interesting discussion on whether the perfect man exists or not, it was time to talk about something slightly different than filmmaking.

VOTA: Apart from directing is there anything else that you really enjoy doing?

Yoon Seok-Ho: I take pleasure in traveling. And the countryside is my favourite place to go to. I like nature too. Going to new places is always interesting. I have a visual curiosity and I enjoy observing new surroundings.

Time flew by very quickly and we were left only with one more question, which, in my opinion, was an important one to those who are or going to be part of the film industry. I asked director Yoon:

VOTA: You have achieved great success as a director and have been successful with most of your TV dramas. What would you say to aspiring young filmmakers out there struggling to get into the film industry, particularly in South Korea, where the competition is high?

Yoon Seok- ho: To be honest with you it’s a difficult question. I guess the only advice I could give is: do what you love, love yourself even if someone criticizes you, do not get shaken by it. After a while your own colour will appear. Whether it’s to do with TV dramas or art, you own style will appear sooner or later. And this style will represent you.

With a great smile on our faces we ended the interview with director Yoon Seok-ho. We wish him great success with his new projects and we do hope to catch up with him again in the near future, perhaps in South Korea.

Interviewed and written by Maggie Gogler