The 21st Busan International Film Festival: The Age of Shadows

Kim Jee-woon is a natural-born filmmaker who, with his alluring script-writing, has never been afraid to tackle a new film genre. With eight feature films and six shorts under his belt, he has already gone down in film history as one of the most influential Korean directors. Kim Jee-woon had no formal training in filmmaking; he started his very diverse career in directing theatre, as a result, his cutting-edge work has been unparalleled in every possible way. His latest film, The Age of Shadows – financed by Warner Bros., produced by Grimm Pictures and now the South Korean candidate for the foreign language Oscar – has been taking international film festivals by storm.

The Age of Shadows, set in 1920’s against the Korean and Chinese landscapes under the Japanese occupation, depicts the story of Lee Jung-chool (Song Kang-ho), a Korean man who – after betraying his nation – becomes a police officer for the Japanese regime.

The audience first comes across Lee when he’s sent to arrest one of the residence fighters; before you know, the fighter is injured and captured by Jung-chool; alas, the patriot would rather kill himself than be taken alive. After the failed mission, Jung-chool is assigned by Higashi (Shingo Tsurumi), a high-ranking Japanese officer, to track and dissolve the resistance group operating in Korea and Shanghai under Kim Woo-jin (Gong Yoo), who disguises himself as a photographer and a pottery dealer. Higashi also appoints an eager agent, Hashimoto (Um Tae-goo), to help Lee with the given task; in fact the officer and the young man are lunatics who intend to do whatever is necessary to crack down on the rebellion; the tension between the youngster and Jun-chool causes the testosterone level to hit a high and the battle of egos begins.

After familiarising himself with the mission, Jung-chool visits Woo-jin’s shop and they gradually form an unusual friendship; even after exposing their plans to each other – while hiding their real intentions – they still manage to hold on to their fragile and hazardous relationship. Will their ‘friendship’ survive even in the face of betrayal?

Kim Jee-woon brilliantly conveys the emotional side of the two men’s bond as well Jung-chool’s inner fight with his own consciousness. With a few twists in the film, one might think that the police officer’s character is slightly puzzled with what’s right and wrong. The Age of Shadows is not only about the resistance, the fight for freedom or the battle of consciousness; it is also an interesting tangle of people’s natures and their desires; even the antihero Hashimoto’s psychopathic ambitions to catch the head of the resistance turn into something more of a dramatic show. The discussions within the resistance fighter’s team – on who is the double agent in the group – feel like we are stuck in a conference room with bankers and unable to escape; these particular scenes slightly blur the narrative, but not to the point of actually being boring. 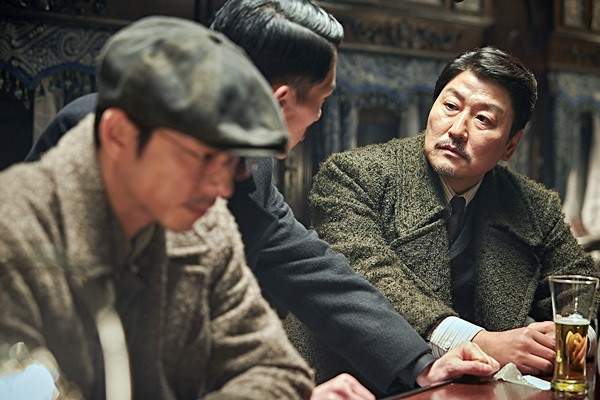 The Age of Shadows is an overwhelmingly entertaining and opulent, well-staged production; along with the carefully executed chase and train scenes, including a few serious punch-outs, the film becomes a helluva thriller. The movie would not have been as good as it is now were it not for the stellar cast, including the superb Song Kang-ho, Gong Yoo and Um Tae-goo.

Song Kang-ho’s characterization of Jung-chool is show-stealing as he often takes over the narrative with his top-notch performance. He is known for his high-quality portrayal of the king in Lee Joon-ik’s The Throne, the priest in Park Chan-wook’s Thirst and the detective in Bong Joon-ho’s Memories of Murder; these films have without a doubt – now in addition to The Age of Shadows – broadened the international awareness of Song’s talent. Gong Yoo, recently seen in Train to Busan, also impresses the audience with his performance as an idealistic resistance fighter Woo-jin. His acting talent has already caught the attention of many filmmakers and viewers and he is definitely one of those actors to look out for. Um Tae-goo. What a great talent he is! He adds so much to Hashimoto’s character of the evil and psychotic agent for whom failure is not an option. Um Tae-goo gives the performance of his life; he is perfect as the villain.

The Age of Shadows is one of the best works from Kim Jee-woon so far; with the exception of a small and not that elegantly executed CGI explosion scene, the film is a great and exciting ride which takes you back to the 1920’s Korea with its beautiful cinematography, production design and music from Mowg (I Saw the Devil, The Royal Tailor) – you can even enjoy a short appearance by Lee Byung-hun. This is a must-see production.