In Conversation with Catherine Bailey

Catherine Bailey, a charming British actress, is often recognised for her superb performance in The 39 Steps at the Criterion Theatre. She was also part of The Country Wife at Theatre Royal Haymarket and ‘Tis a Pity She’s a Whore at the Young Vic. Catherine always shines on stage, in small or big roles; she is on top of her game each time she performs. Apart from theatre, the actress has also had small screen roles: in Ms Selfridge (4) as Nina, in Midsomer Murders as Stephanie Weston, in The Bill, Holby City, Doctors and the list goes on and on. She has been recently cast in the second season of the Netflix hit The Crown.

Catherine is currently promoting Terence Davies’ latest work A Quiet Passion, in which she portrays Miss Vryling Buffam, a witty and outspoken neighbour of the American poet Emily Dickinson. We got the chance to interview Catherine and talk about her career and the latest film production. 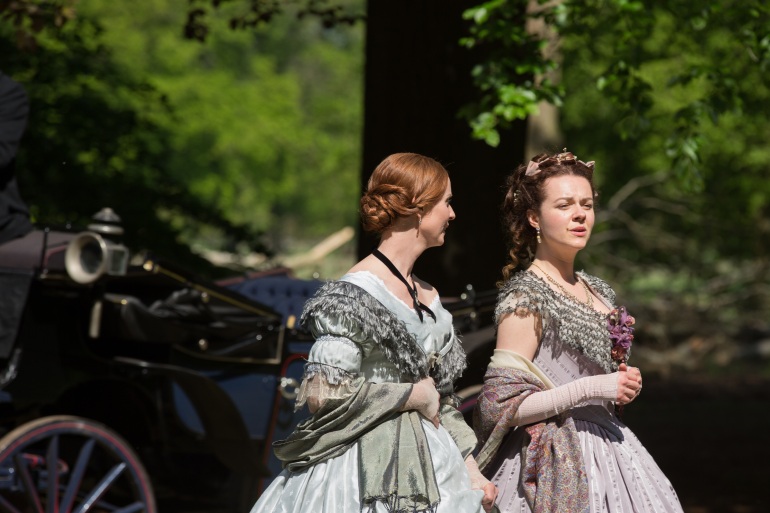 Let’s start from the beginning; how did your voyage begin – were you always interested in acting?

I went to a theatre school that had an agency attached, so I started out pretty young. My first theatre job was playing Ilse in Spring Awakening at the RSC, which was a dream for a 15 year-old. It was so exciting to be performing at the Barbican, being directed by Tim Supple. That led to some regular TV roles, and I have fond memories of shooting at the now defunct BBC TV centre in White City, and rehearsing at the North Acton rehearsal rooms. You would see everyone in the canteen there, from the cast of Ab Fab to Helena Bonham Carter, it was a great experience.

You are an established actress; thinking back over your career to date, what has been your greatest accomplishment as an actress?

Thank you for saying so! It’s difficult to choose, but in terms of stamina it would be playing the female lead in The 39 Steps in the West End. I did that for 16 months, and it was a real marathon! The show is hilarious, high energy and physically demanding, and if it weren’t for the fact I was working with a superb cast and crew, I think I would have run out of energy! I am also very proud of the work I have done at Shakespeare’s Globe. I played both of Shakespeare’s Portias in one season (in The Merchant of Venice and Julius Caesar) as well as a role in Howard Brenton’s new play Dr Scroggy’s War, and I absolutely love the experience of playing there, it is unique. You have a bond with the audience which the open air and natural light gives you, it is magic. And finally, of course, I am super proud of A Quiet Passion. It is such an important story, beautifully told, and getting to work with a legend like Terence Davies meant so much to me on a personal and professional level.

You are currently starring in Terence Davies’ A Quiet Passion, portraying Miss Vryling Buffam; what was the auditioning process like for that role?

I did a tape at first, and got called in a few days later to meet Terence and the producers. He was very specific about what he wanted. He did not want Vryling Buffam to sound modern, or colloquial, and so ahead of the meeting, he asked me to study Olivia De Havilland’s accent in 1949 film The Heiress. It is a very subtle US accent, almost British. He seemed keen that the idea of conversation as a form of entertainment was brought out in the way Miss VB (as we called her on set!) spoke and interacted. It was great fun to play a part who is able to convey such wit and humour in her language, whilst talking about big subjects like war, religion and gender equality.

What was it like to perform alongside Cynthia Nixon and Jennifer Ehle?

I have admired them both for years, they are the kind of actresses I aspire to be. I think they both move through this business with such dignity, something I think is a hard balance to strike if you’re a woman and have had the enormous successes they both have. Needless to say I was thrilled to be working with them, they were welcoming, professional and funny. Cynthia even gave me an on set crash-course in how to use a fan when Terence decided Miss VB should be using one at the ball!

Terence Davies is known to be very sharp and witty. He once said: “I tell my actors not to act, to feel it, otherwise we will know it isn’t true.” How was it for you to work with such a distinguished filmmaker?

He is incredibly funny, kind, and so clever, so being on set with him was a joy. I think there is a lot of Terence in Miss VB’s character, he is very witty indeed. He also knows what he wants, and is very meticulous in his efforts to achieve that, so on that level, he is serious and uncompromising. I love that about him, it is why his films are unique and beautiful. He isn’t trying to pacify or please anyone else, he makes the films he wants to make.

The ensemble of A Quiet Passion is full of unique and interesting characters. How did the filming process – with so many great actors – look like and was it more arduous or effortless?

They are such textured characters aren’t they. I filmed most of my scenes in Belgium in quite a short space of time so I didn’t get to meet the whole cast sadly, but most of my scenes were with Cynthia, Jennifer and Duncan Duff who plays Austin, Emily’s brother. To answer your question, my experience of working on the film wasn’t arduous at all – but then I can’t speak for the actors who were shooting some of those incredibly heavy emotional scenes. I was delighted that I had some outdoor scenes to film in Massachusetts, at Emily’s actual homestead in Amherst, which felt very special indeed, particularly when we saw the room she spent so much time writing in.

A Quiet Passion is a subtle story of Emily Dickinson, an American poet, who only became well known after her death in 1886. Do you think it is important to make films about those whose talent goes or went unnoticed?

Definitely. Terence Davies describes her as the genius of 19th century poetry. I had some knowledge of her prior to working on the film, but I now realise there is so much more to her than just being the reclusive woman in white. She wrote a staggering 1800 poems, and as Terence has suggested, was rebellious and outspoken. The struggles of being a woman in that era are described beautifully in the film too, and aside from Emily Dickinson, there are so many women whose work has been overlooked or misattributed to men over the centuries, which I think makes this such an important film.

Back to your acting; was there a time when you found it difficult to turn yourself into a given character?

I think it is difficult every time! The demands are different for each role. If you are on stage, the effort is more physical, you have to keep your body and voice in good shape just to keep up with 8 shows a week for months at a time. On screen, the disciplines are different, but still intense. I think if it wasn’t difficult I would be worried!

Motivation is important within the acting profession. What would you say is your motivator? How do you remain positive and focused on your role?

You have to love it. I think when that love disappears it is time to do something else. It is such a tough, competitive profession that you need the passion for the work to make everything else that goes with it worthwhile. For this reason I run a theatre company (www.bazproductions.co.uk) to make sure I have a creative investment in the industry. It is good for actors to make their own work, and to have some agency when it comes to the business. It can be easy to get into a mode of waiting for the phone to ring, so being proactive and creating the work you want to see or be in is a great way of keeping yourself happy in this business.

There are many actors who have been venturing into directorial or screenwriting projects; do you feel you want to try your hand at something besides acting?

I would love to do that at some stage, perhaps with BAZ. At the moment we are focused on live performance, but I wouldn’t rule out film at a later date.

I have heard you will be a part of The Crown, one of the currently most popular Netflix TV shows; could you tell us more about it?

Well I just heard today it has been nominated for 5 BAFTAS which is excellent news! But sadly I am not allowed to say much more about my involvement in series two. I think it will come out in the autumn this year, so I’m afraid you will have to wait until then!

Apart from The Crown, is there any other project in the pipeline?

I can’t say too much at the moment. However my theatre company is developing a new piece based on a Kafka story, so it is pretty busy! I’ll be sure to update you when that comes out!

BFI Photo © Courtesy of the photographer

The 39 Steps © The Criterion Theatre