Over the past several years, a new wave of Palestinian film directors, working on different genres, has constructed a specific, on-screen national identity. The projected images of the Palestinian productions have become much more political than the earlier narratives about the life and history of the Palestinians. However, there are still some stories to be found that are more humorous and less political, but still straightforward when it comes to the aforementioned subject matter.

Tel Aviv on Fire by Sameh Zoabi (Man Without a Cell Phone) is one of them. With its provocative title, yet brilliant and humorous narrative, the film brings a new meaning to the comedy genre. Having the film as an Israeli, Belgian, French and Luxembourg co-production, there were no limits for the Palestinian filmmaker – he wrote and directed the film as he wanted in order to depict a witty story that (as he said in one of the interviews) “could relay some of the conflicting sensations he himself felt when he was growing up in Iksal, a Palestinian village (…), as a refugee in his own land.”

Ramallah, present time. Salam (Kais Nashif: Awakening, Happiness Wrapped in a Blanket) is a 30-year-old Palestinian who lives in Jerusalem, but travels daily to the West Bank, where he works as an intern on a big soap opera called ‘Tel Aviv on Fire’. For him to get to the television studios, he has to go through one of the many Israeli checkpoints, and what is supposed to be a routine check suddenly turns into an arrest. Salam meets commander Assi (Yaniv Biton: State of Tel Aviv, The Jews Are Coming), who is aware of the show – not only that, his wife is a huge fan. Soon after, Salam realizes that Assi is full of great ideas for the show. He encourages the commander to write the story, which later Salam takes as his own. What follows is a wave of humorous occurrences… 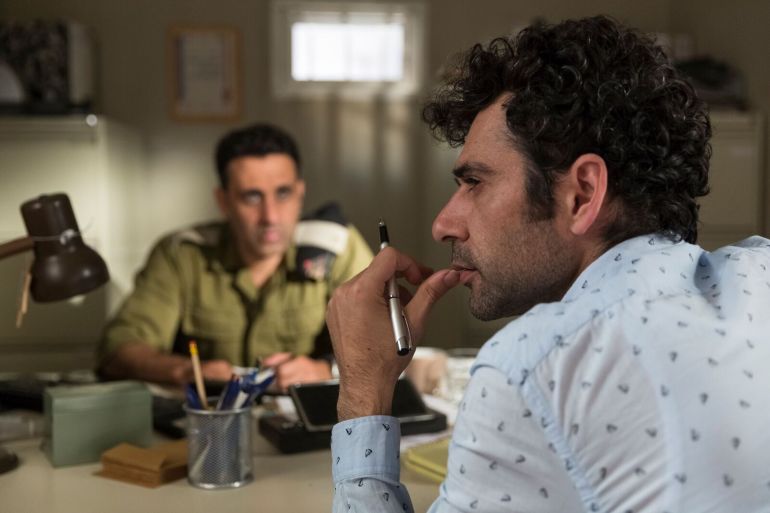 The film comes with a two-for-one offer. While the audience dives into the story of Salam, Assi and the television crew, concurrently the soap opera’s own narrative, with its vivid colours and almost theatrical camera movements, takes the viewer straight into 1967, a few days before the Arab-Israeli war, and a romance between a Palestinian female spy, Rachel (Lubna Azabal: Incendies, Coriolanus) and an Israeli general, Yehuda (Yousef ‘Joe’ Sweid: The Spy, American Assassin) – in there, characters speak of hopes, dreams, and fears; there is no trepidation, and both sides speak freely about what they desire.

With the film director being conscious about the ongoing issue between Palestine and Israel, Sameh Zoabi balances the humour and narrative very well. Palestinians, Israelis and even other audiences want – perhaps even need – a sense of jocularity, even when it takes on a complex and emotion-packed conflict. Of course, it’s hard to expect two warring peoples to dance together when some among them are busy taking over lands and homes; and yet, in this film, the soap opera managed to build a bridge between the two. Also, with the growing self-assurance of Salam’s character, the director shows the audience that nothing can be changed unless people on both sides are perceived as equal. 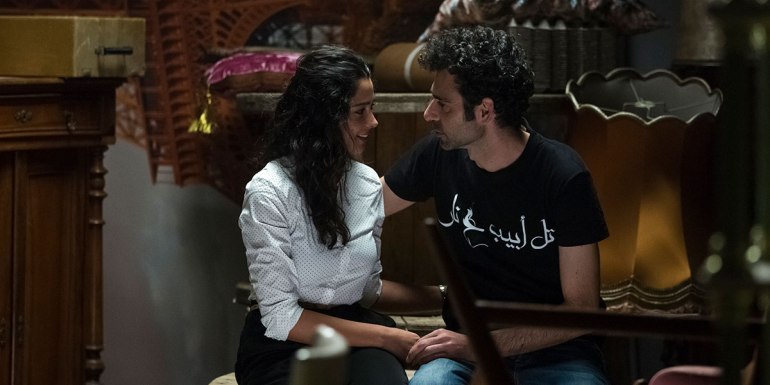 In an indirect way, the film also shows that the younger generation is burdened by the suffering of the past generations and that no matter who the aggressor is, Palestinians and Israelis still have to live together, regardless of how each side views the past. Just like with the characters of Salam and Assi, there is always something that can bring people together. It serves as a reminder that we are all good people deep down, when you strip away the politics a bit, and nothing opens the door wider to bring that point home more effectively than to add a drop of humour to it.

Yaniv and Kais portray a very dynamic relationship on the screen; Yaniv’s character is charismatic, passionate and the uproarious performance brings energy to the Tel Aviv on Fire. Kais leads the film with his slightly stoic and theatrical acting, but delivers well.

Tel Aviv on Fire’s depiction of the ‘imperfect’ relationship between Azzi and Salam is pitch perfect; along with the dual narrative, Sameh Zoabi crafted a competent comedy that should not be overlooked.