The entire theatre, full to the brink with fans of Asian cinema, buzzed, then started applauding with gusto as South Korean actress Gong Hyo-jin took her seat for the Udine Far East Film Festival screening of the thriller Door Lock. After the screening, the applause only got louder, reaffirming that Gong Hyo-jin is not only one of the most popular actresses of Korean New Wave in Asia, but has a huge following in countries outside of Asia as well.

Gong Hyo-jin gained (international) fame by starring in several popular rom-com Korean TV series (K-dramas), including Hello My Teacher (2005), Pasta (2010), The Greatest Love (2011), Master’s Sun (2013) and It’s Okay, That’s Love (2014), earning her the title of the queen of romantic comedies. But Gong Hyo-jin of the TV world is not the same as Gong Hyo-jin of cinema; when it comes to the big screen, she is an actress who does not shy away from a challenge. She actually debuted in cinema first; her acting debut was a supporting role in horror film Whispering Corridors 2: Memento Mori (1999). However, her talent really came to the fore with the role of a dowdy, perpetually blushed high school teacher who harbors a crush on her colleague in Crush and Blush (2008). In the beauty-driven South Korea, that was a role that required both courage and talent, and Gong proved she had both in spades. Her biggest cinematic success to date is the role of a Chinese nanny with a difficult past in the thriller Missing (2016), for which she received several awards and nominations.

Gong Hyo-jin’s Udine schedule was packed as it was to be expected, but we still managed to sit down and have a short conversation about her work in Door Lock and the role that seems to be so very opposite to her outgoing, confident real-life personality.

What interested you in this role in the first place?

I have known director Lee Kwon for a long time, since 1999, and he called me to offer this role, but I said no; I didn’t like it, I hated it – I don’t like watching horror films, so I rejected the script. But he kept calling me and asking me to be in the film, and to take on this role. He even came to the airport once, when I was leaving to go on a vacation, to try and persuade me to take the role; he was very persistent, and so eventually, I said ‘okay, yes’. I had a lot of discussions with him about the script, because I preferred things to be a certain way, especially the ending, and I wanted to shape my character to be a certain way, and we ultimately made a deal about it all.

This film kept us in suspense and left us terrified; however, while making this, you already knew the script, so you knew what was coming; it wouldn’t have been as horrifying for you. Were there any moments on the set where you felt scared?

While shooting, I actually got to sleep on the bed for some scenes, so I was pretty relaxed! [Laughs] It was so cold, so they prepared a blanket for me, and I ended up falling asleep once, so they had to stop filming! Some actors… when they play a role like this, they get scared or let their emotions affect them, but for me… I don’t get scared that easily. 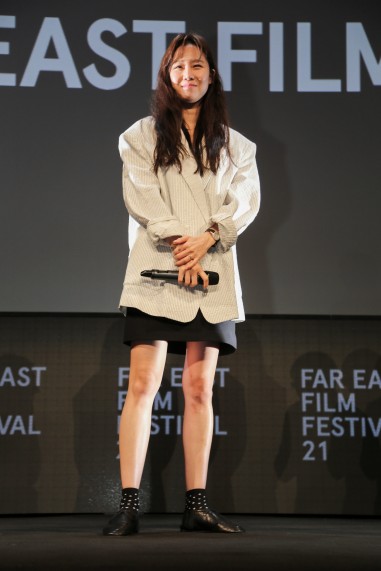 In Missing, you played the role which was more that of a villain, whereas in Door Lock your role was that of a victim. Which of the two was more fun for you to play?

It’s more fun to play the villain! [Laughs] My character in Door Lock is weak and I had to show her weaknesses, so it actually annoyed me a lot. To be able to show that to the audience I had to exaggerate a little bit, I had to lower my voice and so on. I also don’t like clichés. For example, when you see a horror movie, you always see a character go into an area with a locked door that’s forbidden to enter, but why would you go in? Don’t do it! I didn’t like that this film had one such scene, so we decided to leave the door open in the film. A thriller requires certain clichés to make it work. I thought it would be a good idea to kill the villain and the character Ki-jung together, so I suggested it to the director, but he said no; it must be separate, what a cliché! [Laughs]

It seems that you really don’t like clichés, so was that challenging for you? Or was there anything else that was difficult?

[Indicates a long list]. To be able to express this weak character who lacks bravery… it was not that easy, especially when she gets taken away by the villain. There isn’t much dialogue there and in the last ten or fifteen minutes, I don’t even say anything, my character doesn’t even say ‘save me’ or ‘help me’, she just makes these weird noises… [Mimics the noises] I felt like my character was incapable of speaking. I wanted to swear and do other things, but this ordinary woman can’t turn into a superwoman out of the blue, so I constantly wondered what an average person would do in that kind of situation. Wouldn’t she have an axe already, wouldn’t she have a dramatic ending? But, we had to make a compromise. They wanted to set the villain on fire in the end, the director wanted him to be killed in that way, but I thought it was a huge cliché. I think it’s because it was a matter of life and death; in that kind of situation, you can’t think rationally – it’s all about instinct. So, we thought about killing him by having my character suffocate him, but then we ended up changing it to him being killed by a big nail.

Korea has also been touched by the #MeToo movement, and you say that this role was a bit cliché in many ways – how do you feel about female roles in Korean cinema now?

I feel more positive about them; the #MeToo movement and feminism are hot topics now, so I think that the roles for women are becoming more diverse and getting better. But, sometimes, when there’s a strong female character, the story tends to focus on that a lot and it sometimes dilutes the main focus of the film. Are male characters criminals? Do we have to live alone in order to bring up these issues? Sometimes, I become a little careful about what I say, especially because it’s such a hard issue now; but overall, I’m more positive about the prospects of female characters.

We would like to thank Gong Hyo-jin for answering our questions and Udine FEFF press team for arranging the interview.